Unlike the monochromatic depiction, I have engaged in a colourful Warli painting. I have been on it for a few days now. So what do you think? I enjoyed creating it....though it looks simple, it does consume a lot of time to complete with it's little details. I personally feel that Indian folk art has it's own charm. I have a soft corner for folk art. 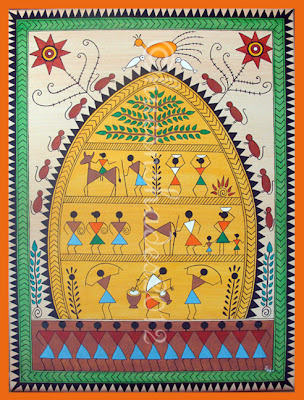 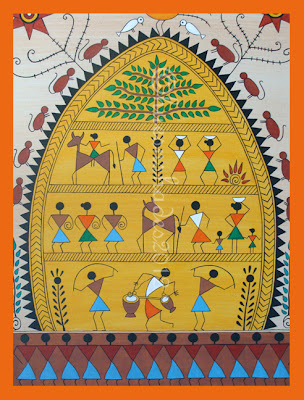 Warli art is an ancient Indian folk art tradition of painting of a Maharashtrian tribe called Warli.. Historians believe that the Warli tradition can be traced back to as far as the Neolithic period between 2,500 BC and 3,000 BC.The Warli paintings essentially depict the basic principles of life which are main theme or basis of any tribe. Their major designs include the harvest season, celebration, wedding, rituals and births. The trademark of Warli paintings is the use of geometric designs such as triangles, circles, squares, dots and crooked lines are used to depict human figures, animal figures, houses, crops etc. Warli art is known for its monochromatic depictions that express the folk life of socio-religious customs, imaginations and beliefs. Predominately white color is used on a red earthen background.

Exquisitely done Deepa! So proud of you!!!! Keep them coming in all shapes and colours and styles!!! Love them all.

loved this one,Deepa!!So beautiful unlike the usual black and white.Enjoyed going thru the details.I also particularli liked the border.Looks like taanth sari border of Bengal.

awesome work
i loved the middle one very much :)
meticulous !

Wow, this is fabulous! I really get the feel for Warli. And this looks far from simple. There's a lot of wonderful patterning here! Amazing!

Such precision and detail...lovely...I enjoyed looking at it slowly and reading about the tribe, thanks for sharing it all.

So intricate a work, done so immaculately... marvelous Deepa! Congrats!

@Sarmistha, Thanks a lot and yes, it does have that kind of a border :)

@Thanks a lot Bella...glad that you got the feel:)

@Thanks dear Lynn...glad to have you here after a long time...happy that you liked reading about the tribe as well:)

@Thanks a lot Amit:)

Wow, I didn't know Warli can be painted so colorful. Lovely work!

something new and loved it!

Beautiful Warli paintings..
Loved it!
Nice to know about it!
Keep sharing

Hi Deepaz. Hope you are doing well and thanks for the intro to your piece. I learned something new today. Your piece is amazing, great work. Very colorful. I like the way it tells a story of their lives. Very very nice. Have a great week.

Very beautiful and delicate with immaculate detailing! Loved it and also the information on the art form was new for me. Many thanks for sharing :)

Its beautiful... painting is one of the best activity where you blend with it and enjoy yourself. :)

extremely pretty-no wonder you are in love with it -now i am too,glad i found your blog,shall follow it .

Very pretty creations-& all self-taught too...great! i am glad i found your blog...shall follow it .

That is impressive work, you got talent!

This is soo good. So happy to get to know your blog. Your work is really inspiring.
Susan

Hey its very nice and yes colourful too :))

Great blog and your art work and research on warli paintings are so much appreciable. keep up the good work.

Madam these are my Warli paintings greetings cards.

Deepa madam these my some other messages. please look into them.

Deepa madam i request you please look into my blog and share your valuable comments.

The blog seems to share interesting tips dayak Indonesian shields. I like this information as high quality Indonesian tribal masks. This blog is really helpful for me.