On Creativity and a couple of my Poems

If you ask me what I love more - painting or writing, it's difficult to decide. I love both, equally. Both have their own merits. Sometimes my visions come out through painting, sometimes through writing and sometimes both; some being repeated and reinforced. It’s difficult to pick one! As I recently replied to *Sonia’s blog post - Did the form find me? where she talks about the process of her writing. Such conversations with myself had been there for a long time and what with Big Magic. I am coming to that in a while. I don’t start with the whole, I begin with a vision/dream, catch-phrase, a sentence basically a fragment that keeps repeating itself to me so much so that I have to let it free, out into the world of reality. It takes a form and life of its own without any support from me, I feel. All the same, you are in a state of limbo until you finish it. You do not exactly know how it's going to go.

It’s like what Liz Gilbert says in **Big Magic – it’s something external, something outside of ourselves that provokes us into creativity. It was believed in ancient Greece and Rome that creativity did not come from human beings but it was a divine attendant spirit that came to you from some distant and unknowable source for a distant and unknowable reason. It was called Daemon; a genius spirit. Even Socrates believed that he had a daemon who spoke wisdom to him from far.

“I am subject to a divine or supernatural experience… It began in my early childhood – a sort of voice which comes to me; and when it comes it always dissuades me from what I am proposing to do.”

Socrates as reported in Plato’s ‘Apology of Socrates’, around 399 BCE

Romans called it Genius which were magical divine entities who were believed to live on the walls of an artist’s studio.  There was this distance, a psychological construct, to protect you from the results of your creativity.

Homer, Virgil and Ovid believed that they had no talent of their own and that it was “breathed into” them by gods. Plato believed that poets became possessed during creation like some soothsayers and that it was some kind of divine frenzy. Vasari mentions Michelangelo as “directly inspired by God” in The Lives of the Artists. Einstein called it “a sudden illumination, almost a rapture”. Liz calls it “downright paranormal”.

Then came the era of rational humanism and the individual, self became important and genius came from within. That was too much of a burden for a mere mortal to handle according to Liz (and I do second her).

I am so fond of her story of the famous American poet, Ruth Stone who as a girl used to hear her poem thunderous and barrelling towards her and the whole earth under her would shake and then she would start running like hell to get a piece of paper and a pencil. Sometimes she would reach her house on time to collect her poem sometimes she would miss it and at other times as the poem moved away through her, she would grab it by the tail while writing on one hand and drag it into her and then the poem would appear backward; from the last to the first word.

Okay, now after all this talk about creativity and genius, my intention is not to talk about all that is magical and supernatural but there are times when you do feel mysterious and magical; that which can not be explained in normal terms of the tongue. I don't mean it happens every time but there are some rare ones.

Without further ado, I just want to put forward my humble attempt at writing poetry. These are the poems that were appreciated when I submitted it to the Asian Literary Society. I have been contributing to the weekly and bi-monthly prompts since June. I had been writing for some years but wasn’t showing it anywhere (until around 2018 when I started submitting it when some close friends and family encouraged me to do so) though except a couple of them in this space here. You can check it under the tag Poems.

This post is to all my friends (real and virtual) who have been asking me to post my poetry and of course to all my lovely readers. Please do read and leave your feedback.

Below are 3 poems – Soldier (Certificate of Excellence), Thunder (Third Prize) and The Haunted House (Outstanding Performance). Titles are in bold letters. Images are all my digital manipulations from free photos.

The air rancid, smoky and scathing 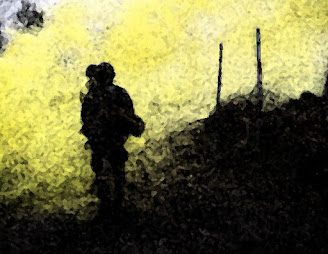 To the acrid acids of burning tanks and ‘broken wares’

Breath choking to the fury of both sides

Facing death at each step, explosions devouring the valley

Where we tread hushed through barricades and trenches-

The land murky and scarred, battered to dust

It’s a distant call, remote from our legions

In well-lit breezy rooms over a glass of champagne

While life and will of the common man is overstepped

No choices offered, martyrs made and sidestepped

For personal glory and amassing a fortune for conglomerates. 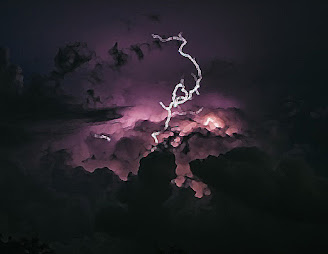 In all life’s adventures

The sky their home, their favourite playground

They loved their company, always near

Never needed any other

But there were times when they fought

The sky rumbled all day and flashes appeared

But sharp and white, fiery in its form

And rocked the long and wide dorm

Thunder always a step ahead

Lightning that shook the spell

Made her despondent the way things fell

Yet once the downpour cleansed their being

Until another time when things went awry

And they tended to fight again.

Each house is a haunted house 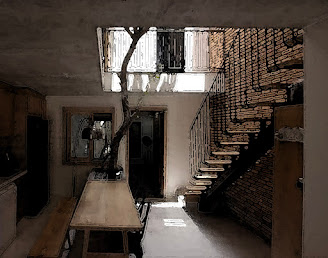 With an imperceptible story

From a prior date of dwellers

In the past who are now on the walls

Of hidden secrets and stowed details

As you walk from room to room, do you realize

The phantoms cascading in invisible guise?

They tread and glide without noise, they sit

On the staircase by the door that creaks a bit

As I move around doing my chores...sometimes less

I hear them in the silence of the night.

The night so dark that it stares right back, in

The fabric of that night – if you stare hard enough-

One can see the forms pressing from the other side.

Intangible impressions of the invisible hosts who

Dwell after we bid adieu (we may join them too)

Each house is then a haunted house.

*Sonia Dogra is an absolutely amazing blogger-writer I came across recently whose work Unlocked: Historical Tales in Verse was the first piece I read and was blown over simply because I never thought that anyone could write about history so beautifully in verse. It's apt for school kids and young adults to know more about the interesting facets of history. Sonia blogs at A Hundred Quills.

**If you are a creative and/or any human for that matter, you should read Big Magic by Elizabeth Gilbert at least once. This is one book I go back to every now and then. There's so much one gain from it and it's truly a work of genius. I am a HUMUNGOUS fan of Liz and her words are soul-stirring for me at least. Every time I listen there's something new to learn. So do give it a try. If you have already read it, do share your thoughts.

Watch this video On Fear, Authenticity and Big Magic by Elizabeth Gilbert and Marie Forleo.

I am linking this post to ISWG (Insecure Writer's Support Group) and PPF (Paint Party Friday).

Lately, I have been writing more often than before now that I have not been able to engage in my art regularly. Not only the pandemic but my health has also been affected a bit so taking a little time off. These illustrations below are a collection from inkredible inktober that I missed to share as I could complete it only by mid-March (began in October last year) when the lockdown started; definitely a much-delayed post. I have used Daler & Rowney acrylic inks on Strathmore mixed media sketchbook.

The only good side (since I am unable to do my art) is that I have been taking part in a couple of writing challenges particularly poetry challenges, thanks to Asian Literary Society for the engagement. They had also hosted an online Art Exhibition, Navras 2020 - a nine days festival of art, culture and literature. You can check my art here on their official blog.

The prompts (of the inkredible inktober challenge) are not in this order though - adding a couple of my haiku too. 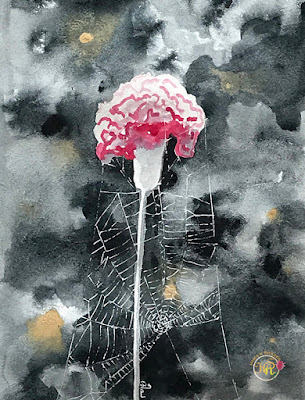 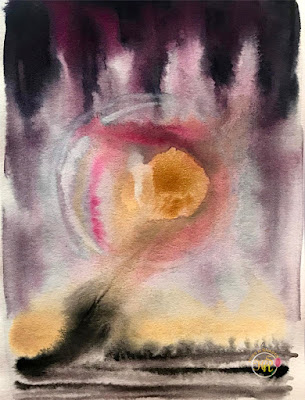 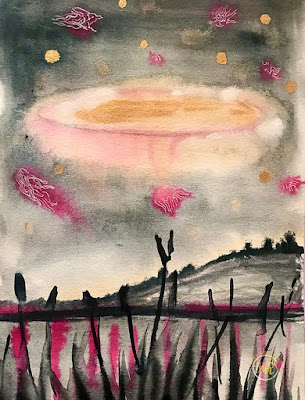 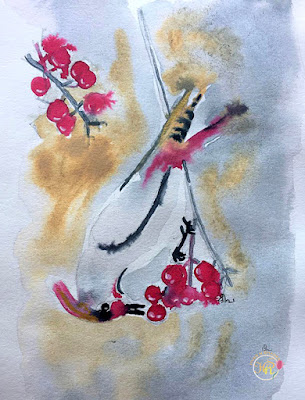 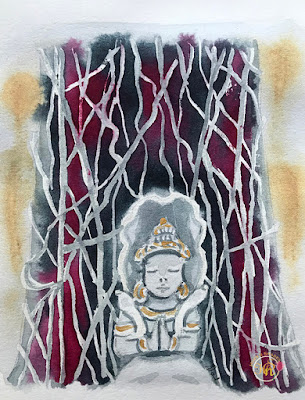 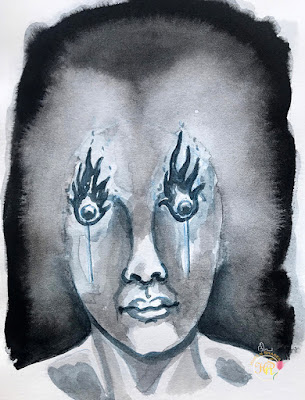 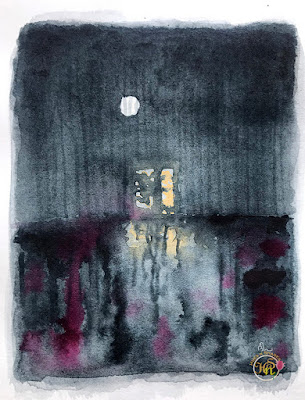 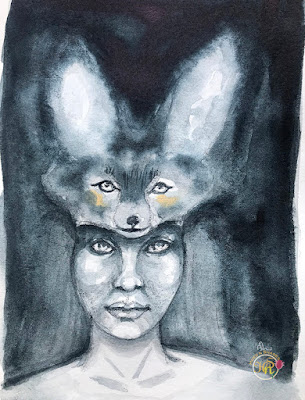 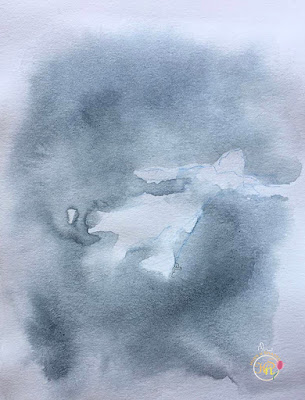 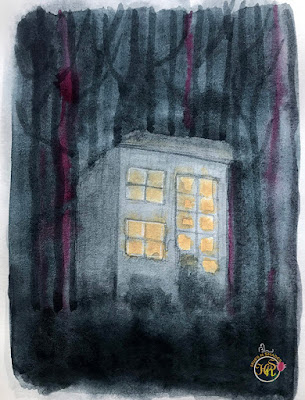 "Stillness and silence
Go hand in hand, a quick
Drop and rhythm breaks"

What do think? Which one did you like the best? Would you like to tell me the Top 3 or top 5?