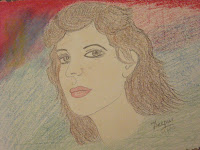 I was digging through my old stuff when I came upon this sketch I had done few years back. It's done with oil pastels. I was actually overjoyed on seeing it...maybe was feeling nostalgic! This is no one I know, if you are thinking It's a portrait. I actually think I am not good at portraits. Anyways I got inspired with this finding and spent my evening yesterday doing some sketches very leisurely. 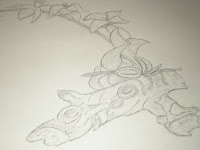 This is a very bare sketch done in about 5 minutes ( was losing patience as I saw the vase nearby and wanted to do that as well!!!) 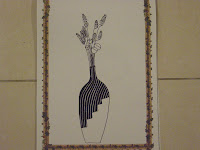 When doing my vase I took a little more time as the lines had to do be done with a bit of care. All the while my 5 year old daughter was sitting next to me and doing her sketch. She finished it in within minutes and asked why am I taking so long! Finally when I finished with the vase, she enquired "why don't you draw me next?" She was beaming with such enthusiasm that I couldn't let her down. I thought I'll give it a try. 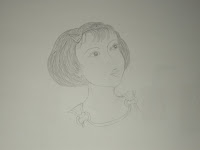 It hasn't come very clearly. But I think that wasn't bad!!! (Just giving myself a compliment:)). Her posture is one of whistling...she said I had to it with that (smiling all the while! Naughty huh?) And below is her sketch that I mentioned above. Cute, right? To give you a better idea, it's choco bar, chocolate cone ice cream, orange juice and chocolate milk respectively. 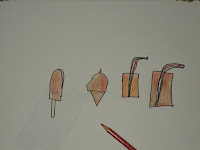 Hope you enjoyed your time here. Thanks for taking the time to read it.
Posted by Deepa Gopal at 8:36 PM 15 comments: 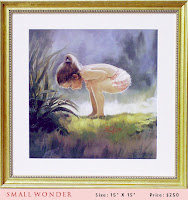 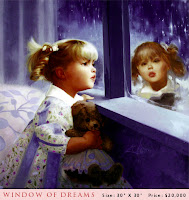 Meet Donald Zolan:
Donald Zolan is an artist whose paintings are full of life with children enjoying their happy, innocent, secure and exciting childhood. Their eyes twinkle with the marvels of nature unfolding before them. It’s a Wonderland and every single thing around them captivates their attention. When I first came upon his paintings through a forward from one of my friends, Manesh…I felt truly blessed! It inspired me and rendered immense pleasure that words fail to express. The sweet innocent faces beaming with various emotions are a wonder to watch. I just couldn’t imagine how he drew so very beautiful children!!! Creativity at its best!!! The setting is idyllic and he never fails to capture the wonder of early childhood which has always been a source of inspiration for this great artist. I wanted to know more about him and searched through Google (the best!) I wanted to share this amazing paintings and info with my fellow bloggers.

Zolan’s Artistic Career:
Donald Zolan, fifth generation contemporary artist, followed his heart from the age of three and has been heeding to it till date. He enjoyed a happy childhood which is reflected in his works where he immortalized these pretty children with certain aspects from his early years. His parents encouraged and supported him from a very early age and they even set up a studio by giving away their furniture from the dining room and providing space for a studio when Zolan was eight.
Zolan won his first major art competition at the age of thirteen and was awarded a scholarship to the prestigious Art Institute of Chicago. By sixteen, he won a scholarship to Chicago's American Academy of Art.

Zolan’s Influence:
Zolan’s major influence has been Rembrandt, John Singer Sargent and Haddon Sunbloom. He even joined as an apprentice under Haddon Sunbloom who encouraged and supported him. Zolan’s wife, Jennifer, works with him to make his dreams a reality.

Donald Zolan is also known for his paintings of philosophers, rabbis and artisans.

Zolan’s creations have inspired many people around the world. People have come up with heart-warming story which is the highest recognition an artist can achieve beyond all the Awards. 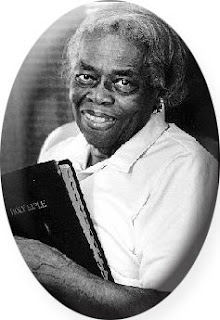 This story will truly uplift our spirit and that’s why I thought of sharing this with you all. Thanks to Robin for such a wonderful story!
Posted by Deepa Gopal at 11:53 AM No comments:

﻿
Colors are not merely a combination of red, blue or green. They have a meaning of their own. They communicate. They speak volumes about the artist and their mind. They reveal their inner most thoughts and fantasies. It brings about a new life... the life of colors and the happiness associated with it. It even imparts it (the happiness, excitement, contentment or whatever) to the onlooker, an observer who admires the art of employing the varied shades of brilliant hues.


Colors have a life of their own. There are certain colors which disturb some and there are also others that soothe some. I could say it could bring about certain physical responses as well. There are colors that are attached to certain cultures say for instance India is a land of diverse and bright colors that people from the West will associate it to. For us it’s the colors of happiness, tradition even self proclamation. That could be and is the case with anyone, anywhere in the world.

Mixing of colors can bring about corresponding, harmonizing or even conflicting colors.
There are colors that are cool (blue, green, turquoise), warm (red, pink, yellow, orange), mixed (purple, lavender) and neutral (black, white, grey, brown, beige). I personally like all colors. I can’t point at one and say “Hey, that’s my favorite color!” Soon I’ll be following others. The nuances of colors are quite exhilarating to me!
They take me to a different world unlike any other where I can be myself and nothing else deters me from plunging into the realm of hues and shades.


Colors, myriad colors
In the unforeseen, unknown world
Of bright n dark crevices
Rise of the fantastic world
Of fireflies n crickets
Of dragonflies n ladybugs
Gleaming in the night sky
Or the green coat of bed
Amuse, astonish n amaze
The little luminous eyes
Wanting to know and feel more
Of the ways of the world
Brimming with joy or bellowing with rage
Colors transform n seduce
Offsprings of the pantheist world
They emerged whirled!
picture courtesy form google except for the first picture

Being an Artist the first thing that comes to mind is Art….of all sizes and shapes, of all mediums and colors, of all genre and nature.

Many a times have I looked at the horizon and wondered the canvas on which the nature painted itself. Be it the blue skies, shades and nuances of yellow, orange and red sunsets, the dark night sky with twinkles here and there…the blue mountains that spanned across my native land, the green foliage that spread out its arms beckoning us to its lap, the clear blue streams and coziness of mother Nature. Everything appears in its height of artistic talent and creativity.

Nature I believe is a great tutor. It shows in myriad ways the profound talent of mixing colors. Perhaps each object, to a close observer, presents itself as an inspiration to the human talent.

I feel emotionally bound with my piece of art when I am in the process of making it. It stirs me up with varied emotions be it writing or painting. I feel purged, emotionally. It freshens me up and I am deeply satisfied (whether that satisfies the viewer is a different matter all together)

What is your say in it? Do you feel the same? Do you differ? What’s your experience as an Artist?
Posted by Deepa Gopal at 12:13 PM 7 comments: