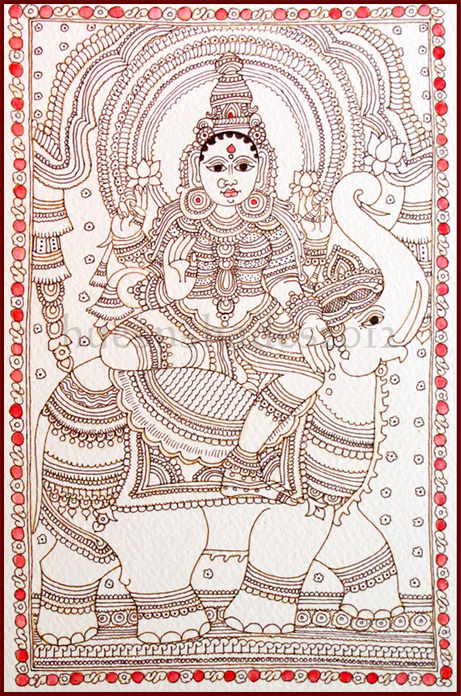 
Kalamkari or Qalamkari is a type of hand-painted or block-printed cotton textile, produced in parts of India. The word is derived from the Persian words kalam (pen) and kari (craftmanship), meaning drawing with a pen.

The art of painting using organic dyes on cloth was popular in several parts of India, but this style of Kalamkari flourished at Kalahasti (80 miles north of Chennai) and at Masulipatnam (200 miles east of Hyderabad) in Andra Pradhesh.
The Kalamkari tradition chiefly consists of scenes from Hindu mythology. Figures of deities with rich border embellishments were created for the temples. In Masulipatnam, the weavers were involved in the block printing art, while at Kalahasti, the Balojas (a caste involved in making bangles) took to this art.

Owing to Muslim rule in Golconda, the Masulipatnam Kalamkari was influenced by Persian motifs & designs, widely adapted to suit their taste. The outlines and main features are done using hand carved blocks. The finer details are later done using the pen. Under the British rule the designs as well as the end use of the fabric differed - for garments as well as furnishings. During this period floral designs were popular. The artisans were made to create even portraits of English men.
The Kalahasti tradition which developed in the temple region mostly concentrated on themes form Hindu mythology, epics (Ramayana, Mahabharatha), images of Gods and heroes.
The artists use a bamboo or date palm stick pointed at one end with a bundle of fine hair attached to this pointed end to serve as the brush or pen.
The dyes are obtained by extracting colours form parts of plants - roots, leaves along with mineral salts of iron, tin, copper, alum, etc., which are used as mordants.

Karrupur is a style of Kalamkari that developed in the Thanjavur region during the Maratha rule. The Kalamkari work was a further embellishment to the gold brocade work in the woven fabric, which was used as sarees & dhotis by the royal family during the period of Raja Sarfoji and later Raja Shivaji.

After independence of India, the Handicrafts Development Board took up the task of reviving this art, which had dwindled due to lack of buyers. This style owes its present status to Smt. Kamaladevi Chattopadhayay who popularised the art as the first Chairperson of the All India Handicrafts Board.

The specialty is that the finished products are mellow. Bright colours are used but the finish is not gaudy. The fabric looks better and better with further washing, with the designs standing out even better against the background.

Linking it to Paint Party Friday - Join the fun!

Beautifully done! Looks like it has hours and hours of work in it. It is an intricate design. Thanks for the write-up explaining this type of art.

Hi Deepaz. Good to see you. What a beautiful Kalamkari piece and thank you for the info. I see a lot of these paintings on Fine Art America. They sell quite well. Thank you. Happy PPF!

wow. the work in that is AMAZING. Looks like it took forever to do. Interesting read too. HPPF

thanks for coming by and commenting ^_^

This exquisite Kalamkari painting. Thank you very much for the explanation, call not known.

It's beautiful and full of details. You must have spend a lot of time creating it. Great job!!!

Did you do this? So intricate! I love all the little details on it! Patsy from
HeARTworks

Fascinating history and post and what a beautiful version of Kalamkari you have done!

such an intricate design but very beautiful as well...xx

what a wonderful and awe inspiring piece! I am really amazed. I love images depicting Hindu and other deities! I have a Ganesh poster and a Tara as well. thanks for the cheers!

That is so gorgeous Deepa..Really loved the detailing - jewelry and other adorments.

Such intricate work, so impressive!! Wow must have taken days to complete!! Thanks for the history too!!

The details are amazing in this work! So intricate! Happy PPF!

Your attention to detail is always exquisite! I too appreciate all the history you give us as well!

wow such intricate and incredible detail!! Thank you also for sharing the history-very interesting.Happy PPF

Love all of the details !!! So Beautiful!!Thanks for sharing the history also ♥

Deepa, what an interesting history and incredible painting/illustration!! oh my... it's quite stunning. I LOVE LOVE all the detail. Beautiful work. xox

Astonishing and gorgeous detailing! Wow! Her beauty is mesmerizing. And very interesting explanation. Thank you!

Wow! This is amazing! What a gorgeous design.

Beautiful and original drawing, love how you make the intricate detail look so natural and easy! Happy PPF!

Nice work Deepa and thanks for such a detailed History

In love with the word "Kalamkari".
Intrincate design with an amazing flow of lines.

Wow! very nice or should i say perfect. Amazing detail.

This is fantastic! The detailing is so fine! Wonderful work Deepa!!

I just love kalamkari. This one is looking good :)
Good going, keep it up Deepa :)

Kalamkari is very intricate work. I wonder how those guys have the patience and good eyesight to do it. Unfortunately, there are not many patrons of these art.

These hand painted textiles are amazing, they are the best in the world in my opinion.

Hi there, thankyou for visiting me - I have just been looking at your lovely art work - varied mediums but a distinctive style. I liked this work the best and have not heard of it before so something new for me. I do hope (as you mentioned) you will get your silk paints out - you will need to stretch the silk very tightly and pin on a frame to get a good result - hope you have lots of fun with it as the results are quite beautiful and surprising. Betty

Hey Deepu! Long time since I stopped by and left any comment! Happened to see the Gajalakshmi painting...Simply stupendous!! This again is one of your best works, I would say..Simple, yet intricate....beautiful face, and a very nice border given to it...Maybe also a personal interest in seeing Goddess'pictures, and that too another wonderful type of painting you have done, Kalamkari..again, a hot fave of mine....Even in sarees, I have loved seeing this kalamkari design...Well done...Love it a lot!

This is a lovely painting. I found by googling watercolour Lakshmi. This is a brilliant blog, I've added it to my favourites! Many blessings to you.

Madam today i am sharing one message on Kalamkari paintings in my Heritage of India blog.

Madam please explore my Heritage of India and share your comments.

beautiful.. brilliant stuff... I was lukin for something like this since a long time. Checkout latest collection of Kalamkari Sarees Online at lowest price.

Thanks for the great posting! I certainly enjoyed reading it. i was searching last few days about kalamkari sarees online and this one is really very effective.

Fascinating blog and Thanks for sharing information. more collection visit on Kalamkari Sarees .

Thanks for sharing Information to us. If someone wants to know about,I think this is the right place for you!