"My death needs to mean something..."

Recently there was a news in our regional newspaper about Leelah (Josh) Alcorn (17), a transgender teen who committed suicide on Dec 28, 2014 in Ohio. 'She' walked 4 miles to Interstate 71 in the middle of the night where she was struck and killed by a tractor-trailer. For two-three days internet talked only(so it seemed) about Leelah..I could see different pictures and news from different sites presenting their views and opinions and there was so much hatred towards the family particularly the parents who failed to understand their child. I was deeply affected by the incident ( like may other incidents... sometimes I just skip those pages or channels as if that would help me! Yet, the truth remains....we just can't escape from such facts!) just by the thought of how a teenager who pondered (must have done that for a long time) and took the drastic step of taking one's own life...put an end to all 'her' sufferings. She had explained in her blog that she felt "like a girl trapped in a boy's body ever since I was 4."

Why am I writing about her? I am not sure, but this is compelling! I had to! For me it is as simple as they are HUMANS too...with the same kind of feelings and emotions and pains! How hard can it be to accept people as they are when it is not even something within their power??? Many, I hear and read, take it as some sort of mental ailment. Isn't that sick and pathetic?

I think in these recent years much has been talked, discussed, presented and publicized through TV and other mediums. Earlier there was so much of...is it ambivalence(?)...when LGBT issues were spoken about. It's not completely extinct yet people are now more considerate, candid and accepting (than in the past when people would never come out speaking 'for' them) - can not generalize the situation though. I am glad that we are evolving though (may be I still like to see the positive side).

I remember Aamir Khan's Satyamev Jayate presented this issue in Season3 - Episode 3 - Accepting Alternative Sexualities. He needs all the applause for having brought up the issue in such a stoic fashion and made the country aware of the impact the society forces on them and how the lives, knowingly or unknowingly - most of the time it is the former, are transformed for the worse. There is so much stigma and taboo attached to the subject that one needs to think many times before venturing into it, I feel!

I loved Ghazal's part where she just had to be released from her disconnected body to what she actually was and most importantly how her parents stood by her even if it was with all their fears and insecurities. She is more graceful than any other 'woman' I have seen! To top it all, she's an upcoming script-writer too!!!

I felt Leelah's story resembled Ghazal's but it ended up tragically because she didn't have the much needed support system as Ghazal. Leelah's case became global, specifically after her 'Suicide Note' went viral and it was followed by 'SORRY' (to friends and family).

Leelah's mission was clear...she didn't want her death to go unnoticed...she wanted to bring about a change. She said "My death needs to mean something"...she wished to "Fix society" and she left all the money she was to inherit and what she had for the cause - to save LGBT community. It shows the 'grave' impact on her 'little' mind.

This alone can be a reason why one should not talk about her? It is this attitude that made me write this post...she takes it to the level of sacrifice by doing so.
I would like to hear what you wish to say...your thoughts on the subject. 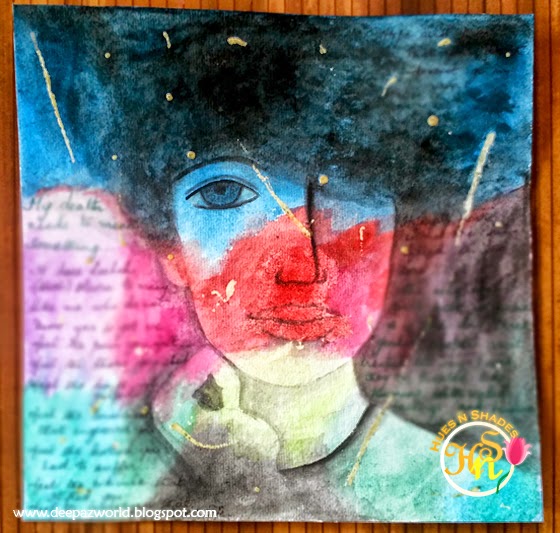 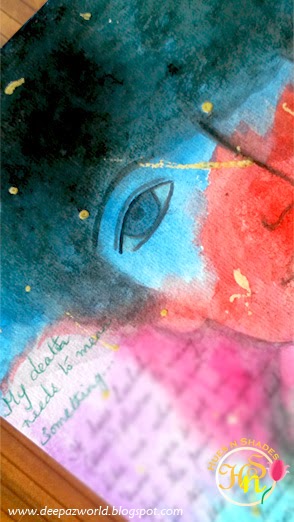 "Leelah, the light was
put out to darken her thoughts
yet it caught flame, wild."

A wonderful tribute to Leelah. Valerie

I hadn't heard about this girl or her tragic story but I applaud you for tackling such a serious subject on your blog and it is a wonderful tribute to Leelah that you have written this and painted a beautiful painting in memory of her. I am very much of the live and let live mentality - I think it is a shame that even now in the 21st century there is still so much ignorance and hatred surrounding something which comes down to simple biology and genetics - people are the way they are and I just wish we could all accept that and let them live their lives free from persecution.

Wonderful artwork and tender article about the teen who felt lost. Thank you for your thoughtful article on a situation so hard for those involved.

Beautiful tribute for this beautiful person. It's very sad it ended the way it did.I'm sure she is looking down and thanking you. Wonderful painting.

a touching piece of art and words for Leelah. Yes, I had heard about this and it breaks my heart. You are SO right, these are human beings, and those suffering in this way aren't choosing to be the way they are , it is something I believe is born to them. And if only everyone could accept this and love unconditionally. Tank you for bringing to attention a very important topic.

Sadly this makes me see that we still have a long way to go in our spiritual evolving as a species. If only we could all accept each other for the beautiful souls we are and the beautiful gifts each one came to share.I think we are really one with each other anyway in the larger scheme of things. Hugs to you for such a thoughtful post.And your art is beautiful!!!

What a beautiful and heartfelt painting, and a well written post. Leelah's death does mean something, and it's tragic that she had to go to such lengths to be heard. It's encouraging to know that society is evolving. Even compared to just 10 years ago, attitudes toward the LGBT community have changed. But you are right, there is much more to do. xo

Thank you for your gift of acceptance to the entire LBGT population! And to the rest of us who may need enlightenment!

Your USP is that along with a relevant sensitive post we get to see your beautiful art work.. Keep going!

I cannot even imagine how suffocated Leelah would have felt to take such a drastic step. Let's try that we don't have anymore Leelah like cases more. I hope people understand!

Touching words.
I feel everything is there for a purpose.
May we understand & learn to accept...
The world will be a better place then.

A touching tribute to the poor soul.

I don't understand why the society is so intolerable to such people! They're often looked up as if they're suffering from some deadly disease :-(