When art and culture meet, blending from different regions finding a common voice/language to interpret shared perspectives of identity, nationalism, femininity, cultural dynamism, displacement and belonging, they achieve a universality that appeals and relates to each and every 'community'. 'Melting Pot' is one such initiative that birthed in the minds of artists' Barbara Ash and Katarina Rasic in collaboration with Gayatri Gamuz and Pritam Bhatty.

"Melting Pot – a place where many people and ideas exist together, often mixing and producing something new." (Cambridge Dictionary definition)

"Melting Pot” is the handle for a show of paintings by four women artists of different nationalities all working in India. Barbara Ash is an English artist who has been working on projects and shows in India since 2007. She has had a solo show in Kashi Art Cafe in 2009 and had participated in a collateral event "Interstices" at Hallegua Hall during the first Kochi Biennale. Last year a Serbian artist friend of Barbara's, Katarina Rasic, and herself, had an idea to form a working artist collective and use their "international links" by connecting shows in India, where they worked, with their home countries, creating a travelling show of paintings under the subject "Melting Pot".  They wanted artists operating from a strong female perspective. They both loved the work of Gayatri Gamuz, a Spanish artist, who has been living in India for 20 years, and happens to have had exhibited in Kashi Art Cafe as well and they were happy that she became the third artist to join the group. Then a mutual artist friend, Moutushi Chakraborthy - Kolkata-based print-maker and curator, connected them to Pritam Bhatty, a native Indian with an eclectic heritage, with descendants from the British Raj, the Netherlands & Sri Lanka. They loved her work as well as they had a common ground there and were happy to include her as the fourth artist. 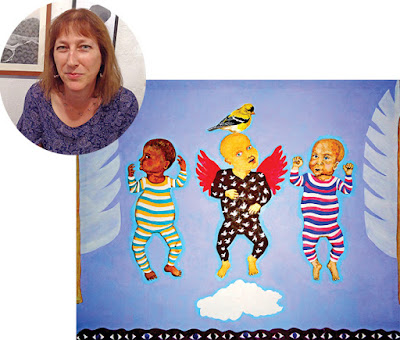 Barbara Ash and her work 'Foreigners' 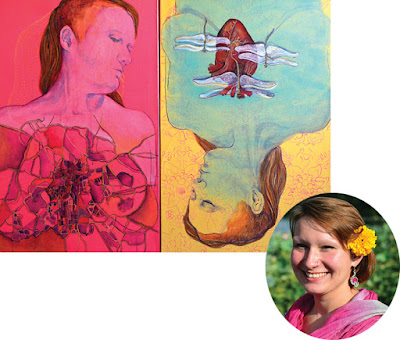 Katarina Rasic and her work 'Heart of the City' 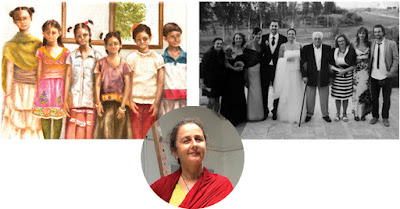 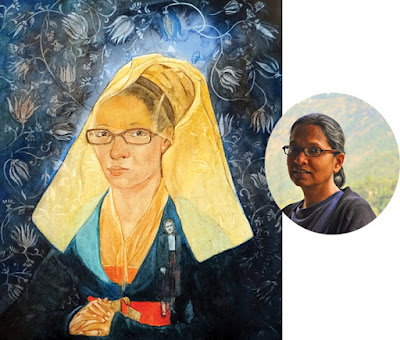 Pritam Bhatty and her work 'Grandma'

The Theme and the Binding Factor

The project provides a platform to look at the particular language of women artists working in a contemporary representative painting tradition. Barbara and Katarina haven't actually seen all the finished works yet as they were still in progress at the time of writing, so it will be an exciting experience to see them all together, and also they had never met two of the artists. The contact has been through the internet, so it will be an interesting experience to meet the artist behind the art on the day of the show. It's the strength of personality & the originality in their work, and the fact that they have a lot of professional experience & seemed very talented and accomplished artists that brought them together. "Looking back it was a leap in the dark and a lot of faith for all of us on some levels," says Barbara Ash.

The artists all worked independently to their own individual interpretation of the theme of  "Melting Pot" with their own histories and approaches and subsequently the exhibition explores a multitude of issues including female identity, cultural dynamics, ideas of belonging and home. They had similar concerns and ideas and worked on subjects of childhood, and explorations through family photos. Coincidentally there are two strands of concern in the artworks that follow issues currently prevalent in the media, there is a lot of debate and controversy around the area of national identity; "what it means to be an Indian", and the recent groundswell of energy around women's rights/female empowerment. Then as a secondary issue Barbara realized that they were all foreigners in India. "So that was an interesting prospect - would that be a significant factor or not? Interesting to gauge." There was already work coming from a strong female perspective so that was the prime motivating factor for Barbara and her artist friends, but then the cultural fusion became an angle too.

As Gayatri and Barbara both have histories of exhibiting in Kashi; there is already a strong connection there. According to Barbara it's a great venue where many renowned artists have exhibited. "With the advent of KMB - Kochi Muziris Biennale, Kerala has fast become a vibrant Art center to be reckoned with, so it seemed a perfect choice to launch the 'Melting Pot' tour in Kochi." They are excited to have six dates already confirmed, starting from Kashi Art Gallery.

In Barbara's words, "With the "Melting Pot" enterprise it is significant in that there is no curator, organisation or funder "pulling the strings" and setting-steering the agenda. It exists independently as an artist's "brainchild" and is propelled by mere energy and determination. This is the first initiative of this kind and on this scale that Katarina Rasic and I have managed and we are very lucky to work with some wonderful artists and to have some great galleries/organisations hosting us and are keen to have new collaborations further down the line in new venues and different countries following the "Melting Pot" dynamic..

I have been doing shows in India for a few years & had been wanting to do artist exchange projects for a while & had been involved with a few projects that didn't, for various reasons, come to fruition. Katarina worked on a few projects in India , more in the performance art field (Art Adda- a project supported by IFA), and she was looking for a project which would connect her home country with India, so things fell into place with Melting pot. Working with Katarina made things easier, she's very dynamic & forward-thinking & we were both keen to connect up artists working in India with venues in our home countries & get an international tour going. Once we got the first venue secured it became easier & then I think the other artists realized we were serious!!!"

The dates and shows:

Wishing the 'Melting Pot' team the very Best for their upcoming travelling show. The inaugural one is to begin in Kashi Art Gallery, Fort Kochi on April 2nd.

Must be a great experience for you...:-)

Good to know this 4 different artists.

This is a wonderful initiative. Are these works on sale? I particularly like Grandma :)
It would be lovely if you could come to Delhi.

Wishing you all the best.

Now that is surly a great experience.. and thanks for introducing good artists ...

The Heart of city Looks awesome

The shows will be truly amazing, so many artists working together would surely complement each others' work!

It looks like it is going to be an amazing show, and a wonderful collection of creativity and work... happy ppf

Thank you for introducing these talented artists. I'm sure the shows will be fantastic!!

Wonderful art and a great experience with great artists.

PPP leads us all over the world and here you bring some of the world to us! Thanks for sharing! Beautiful work!

Such a nice variety, should be a wonderful show!

What a great initiative! By the way, I absolutely love your profile pic, it is beautiful! Warm greetings from Montreal, Canada. :)

The paintings on your website are beautiful with nice use of technique. I visited many art galleries and museums through art culture festival. It offers a lot of useful information. I suggest you to visit the site for more info

Thanks for showcasing new artists and hidden talents in india. I found similar artists on art culture india to help people gather information. Let me know how you found the website to be http://artculturefestival.in/