'Mundane' is nothing but Extraordinary

Durbar Hall Art Gallery D opened up in colourful suggestions and imaginative pieces and since none was there at that time because of the heavy rain, it gave me ample liberty to walk around scanning and then savouring the works of the artists’ duo – Amjum Rizve and Hima Hari. They “combine their lines, colours and even their sense of distribution or distortion of forms and spaces”* except for a few sketches. Yes, you heard me right. It’s not a separate display of both the artists’ but a singular one. Such displays, I believe, are uncommon. 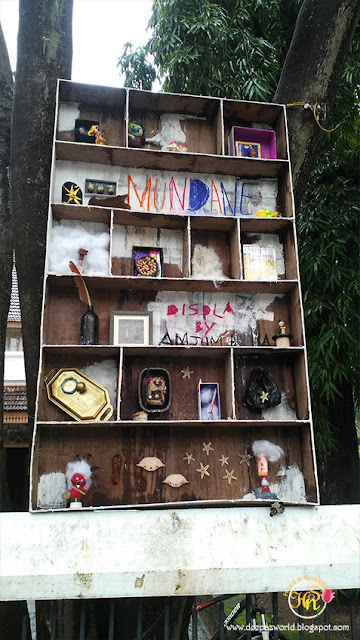 Collectibles they gathered overtime which they have used instead of a flex at the entrance of the gallery. 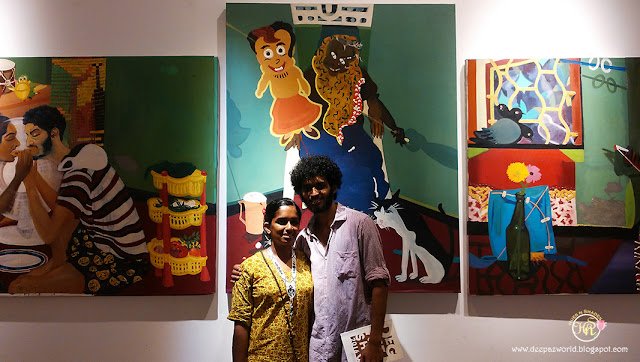 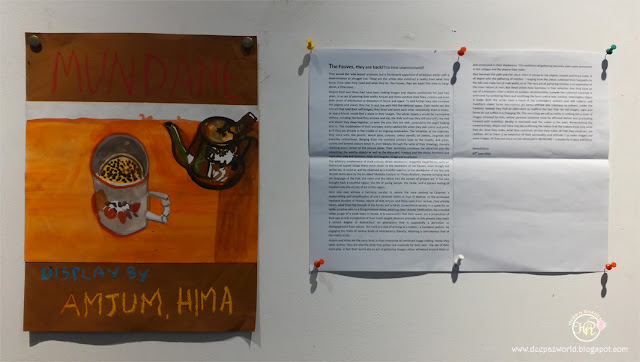 Amjum and Hima’s works reflect their everyday life and locale, their routine giving it all the colour and meaning to make it an extraordinary one; a celebration of their life. It’s a mix of emotions, materials and images – a potpourri or sorts; sketches in wooden and fabric frames, paintings in canvas and scrolls with pom poms, heart-warming collage of friendship, a reminder of the college days with whom they had communicated spiritedly. Colourful fabrics – some plain, some ornate while others worked upon...there are diverse kinds of fabrics they had collected overtime. They have not only collected such found objects but also intense and passionate personal memories that speak to one about their very subjective and delicate day-to-day existence. Anjum is all tender when he points out that Hima loves to sow and collects favourite pieces to later upcycle it; incorporating them into their paintings. 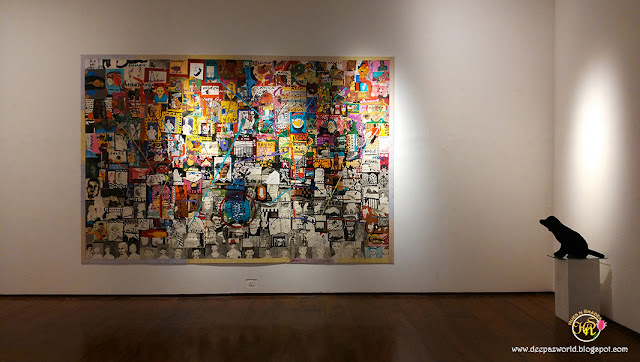 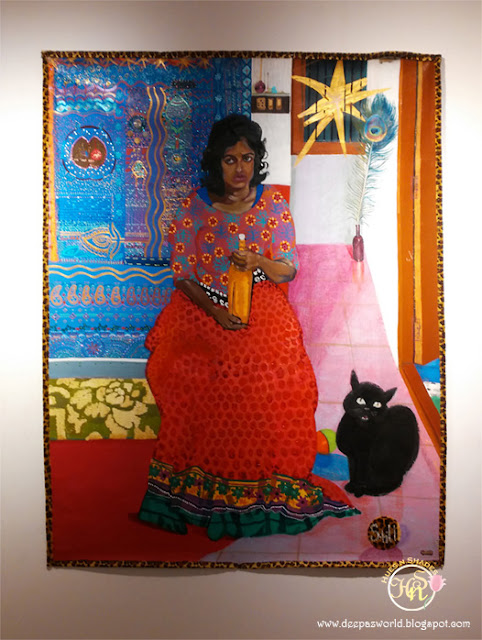 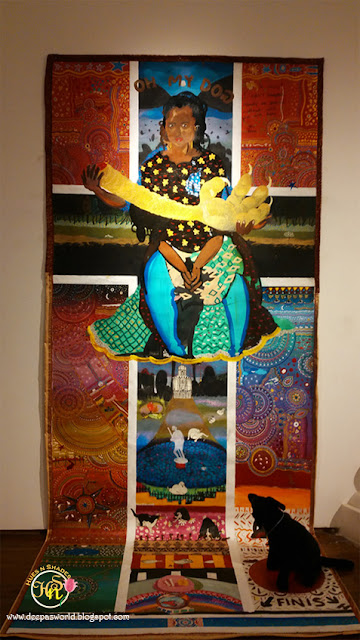 Amjum and Hima both agreed that it was sometimes hard to work together when they started out since both have a strong sense of creative disposition. They did clash at times but finally they succeeded in bringing forth the best of both talents. There is mutual faith, trust and love that positively binds them together – in life and in art.

All their works have been done over a period of time. The collage started when they were in college. It’s a display of the warmth of friendship, affection and gratitude. Their works contain daily visitors to their abode from crows and pigeons to dogs and cats and their friends as well. Certain images are repeated in their works from kittens and angry birds to toys which can be found in their home where they live together. It leads us to the triptych which mentions ‘Couples not registered’ and a nude that calls out ‘Made in Kerala’. It does sort of evoke a rebellious nature for which Amjum clarifies it is these social norms that highlights it to be so, else it would have been ‘mundane’ as well. 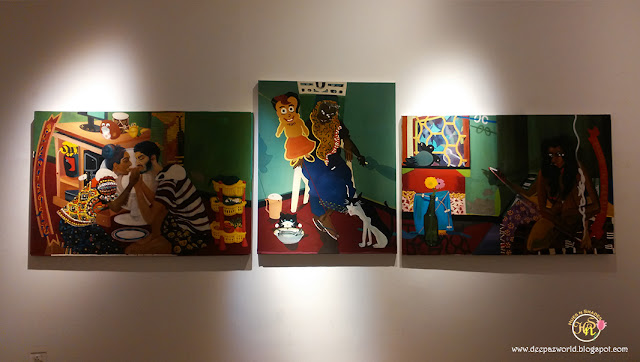 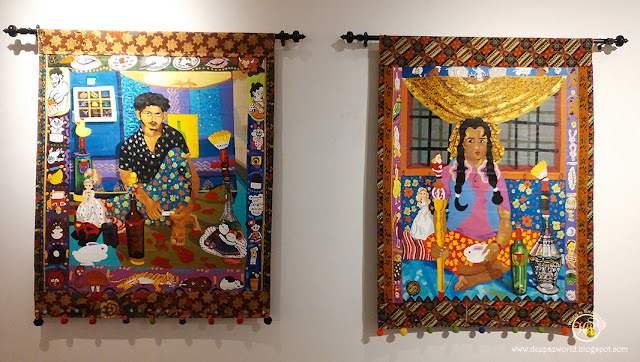 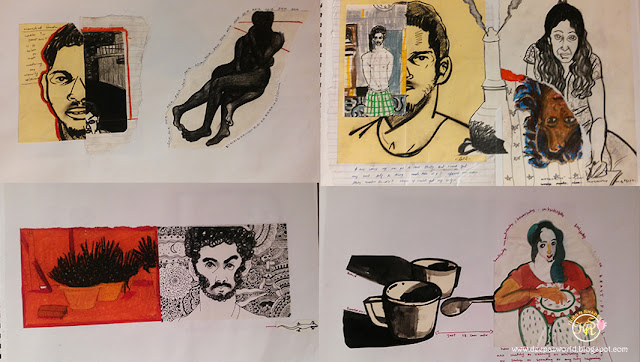 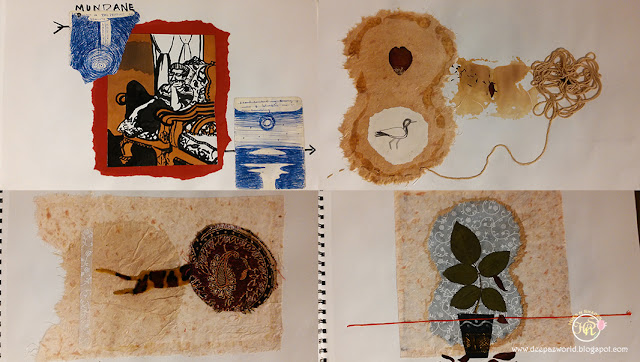 Amjum and Hima arrived as I was about to leave giving me a chance to meet these young and talented creatives. Smiling, innocence-abound and ready to answer the queries. It was then that they explained every little detail I asked for, particularly the kohl-eyed Amjum while Hima had to play the hostess to other visitors who had started to arrive.

All their works are not titled outside but within the work itself; creatively integrated.

its pretty common at uni for people to work together like these, often the results are better than working by yourself, sometimes not lol