My series in my show 'Repercussions' which happened in October 2016 was all about duality showcasing the external and internal turmoil, implications, suffering, conflict and at times even submissive passivity while the lamp of hope is still lambent. It was a mix of abstract art and surreal images with concoction of Haiku poetry to sum it all. This painting is not from the series, but was painted during the course of it though.

"Sometimes you find yourself as a vessel of your different self. Duality always perplexes me (or for that matter, anyone sensible). It is such dualities that make and break us. It is such dualities which when confronted in life that carves a niche, a haven or an abyss. As much as one wants to avoid it, it keeps happening though. It is the unclear voice within oneself that directs the whole show feeling the reigns in the grip of supposedly strong and focussed hands and yet every turbulence happen. It’s quite inexplicable to fathom that, leave alone explain it to the world. It is one such life I am in!"

That's the character below speaking! 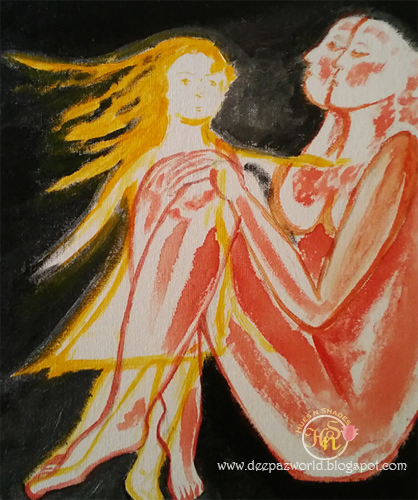 Shadows, silhouette,
Dangled lives
Sometimes one,
Sometimes separate
Cobbled and torn out.
I perceive,
Sometimes try hard
To visualize what is
And what is not.

This is beautiful, Deepa. We are indeed complex beings.

You amaze me with your capacity to create such emotions and visuals in your art and prose. Really beautiful. Happy PPF!

Linda has said exactly what I feel. This is amazing. Happy PPF

Hello Deepa, your words and art are insightful to a staggering degree.
Happy PPF :D)

Deepa this is so true. I love the art you created to express a vision.

Beautiful and haunting work. It's a compelling poem and the art has so much much depth.

Very lovely painting and poem. Glad to have visited.

You've said it right. Sometimes there are phases in life you wish were never there!

The work is beautiful though - poem and painting.

This is really nice.

I loved the painting the the verse both:) Lovely and profound!