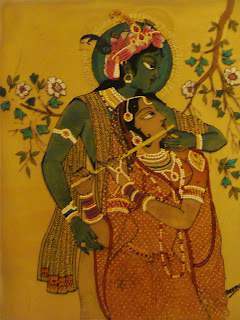 Radha-Krishna
All these paintings are very Indian in nature(no need to say that,right?) All are glass art. It is also a mixed media. 'Radha-Krishna' & 'Small Talk' took it's form in 2003 when I was in my family way:) They were done for my yet-to-be-born daughter hoping that she would imbibe it from my womb. My mom always encouraged me to do the best of things during that period('& always' as she says) citing stories from the purana...esp the case of Abhimanyu(which I think almost every Indian would be familiar with, if not...) who learnt the knowledge of entering the deadly & virtually impenetrable Chakravyuha from his father, Arjun, who talked about this to his wife, Subhadra, while she was carrying Abhimanyu in her womb. I was always fascinated with Indian mythology; mythology of any country for that matter. 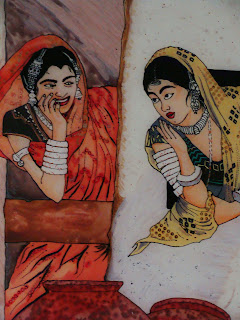 Small Talk
'Small Talk' has the Rajastani flavor to it as is evident from the attire & the huge,broad,plain bangles made of bone(correct me if I am wrong);usually worn by certain tribes. The unmarried women wear them from their wrist to the elbow while the married wear them from elbow upwards till their underarm as well. Seems interesting:) By the way they are nomadic tribes. 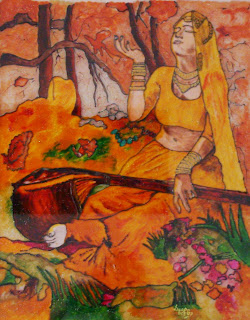 Devageetham
'Devageetham' took it's form in 2007. I was always captivated by Meerabai's(mystical poetess & sage) stories;her love & devotion for Krishna. She's known for her soulful singing that is said to've mesmerized everyone during her time. This painting however is not typical Meera as we see in many picture of hers. She's usually attired in white, holding a tampuru(tanpura). I've tried to conceive her in colors. This image has been like 'something-I've seen-long ago-but-forgotten' kind.
Hope you all like it.
Have a Colorful Day:)
Posted by Deepa Gopal at 9:16 AM

My grandma would give you a tight hug when she see's this... and you'll become her fav. beyti! lolzz

All I can say is the artwork is really superb. You must be having your own exibitions right? If not... you must start!

I am a non-religious person but mythology fascinates me. So I know all about the background of these pictures.

like aniket, i too am not a religious person. and i too am very very interested in hindu mythology.this is why this post was very fascinating for me.
deepa you are a very talented person. this was a very pleasant treat.
i am sure your daughter has imbibed all this beuty within her :)

Aniket, I already love your granma already. In fact I love all granmas & granpas. They are so cute:)

Thanks, thanks & more thanks for the compliments.

Regarding Exhibition...not yet ya!! really looking forward to one by some miracle:)

Mythology, I knw(by now) that you love it too as I do. It is really fascinating.

L'girl,Thanks dear for the last of the comments. I very much hope so. As of now she is interested in it. I can say(very proud) that she takes interest in most of what interests me:)

Ani, sorry for the two alreadies!! Slip of the fingers:)

Beautiful work! I am in love with the first one- Radha-Krishna!The golden background is so beautiful!

Hi Deepa! I love Indian art so much. Thanks for these, and the descriptions. I took a lot of photographs of wall murals and various paintings when I was there, and I use them sometimes in my slideshows. I also LOVE statues from India depicting various gods and goddesses in interesting positions. It is so evocative. I also have a number of Indian miniatures I bought from an artist I met in Udaipur, I had a long chat with him about his art and took many photographs of him painting. There is such a beautiful discipline in the study of art there, isn't there?

I don't know what your set-up is for photography, but I'd like to suggest you take your photographs without flash. If you can get really still, or use a tri-pod, you can get better color and no interrupting flash. I didn't have a tri-pod when I was there, and just used my little mini-camera, but I found that if I held the camera really still, I could get a great shot without the flash. Give it a try! You might like the results.

Sorry I haven't been around much, I've been so busy, but I will be around more now that I'm done with my little slideshow.

I love all the pictures, what a lucky daughter.

Your art is very beautiful! I really enjoyed learning so much from this post. Have a very wonderful day!

Your art is amazing, beautiful, awesome. I am moved by the stories that go with these three, the history, mythology, all of what you share. Thank you so much.
I am unfamiliar with glass art such as this and am intrigued by it. I wonder if you ever show the process of your work.

No one in my family loves art, for they ahve no idea of it..
But i hafe a slight idea of it, cuz i had interest in ti when i was in school and i use to wonder how people make such beautiful paintings/art work..

'small talk' is wonderful - actually they all are...will answer your lastest e mail as soon as i have a free moment. hugs for now from london.

Great work of art Deepa... you are very gifted. I really enjoyed your post.

hello. first, i am not familiar with glass art either but i enjoy seeing the intricate paintings you've done here.

second, since i am seeing your comments on my favorite blogs, it seems like a good time to say welcome and hello. you've introduced yourself to blogland with grace and enthusiasm, and i like that.

Pea, thanks. When I was thinking of the background as gold...I had a feeling it would be great..& it does look good.Happy that you agree with me:)

Cat, Thanks so much. This is your first visit here & am so happy to receive your detailed comment. I agree that Indian srt is truly great & its very evocative & inspiring with the tales behind them. I love murals too. The colors involved are really great(am speaking abt Kerala murals here...found in some temples).The colors are bright & natural dyes.

I haven't studied art. Whatever I do, I do it out of love of the art. Lord Krishna is my fav & the first glass art that I did, some 14yrs bac is of L'tl krishna eating butter.

Thanks a lot on the tips of photography...I was thinking on what to do abt it as I cud see the flash. Will try out what you said. Thanks, it really means a lot!

Renee, Thanks. I know you love colors. Have seen it in your blog:)

Artist, Thanks a ton! I am happy that it was a good read for you.

Lynn,I am thankful to you for the appreciation.It really inspires me. I will surely come up with something which I can explain the glass art to you all.The basics is very simple. Once you know it...it'll be a great & you could come up with so many of your own.

Mahesh, Thanks. I sm sure you do have the taste of art as is evident from your writings:)

Soul,Thank you always for your inspiring words:)

Sujata, Thanks. I am happy by your visit. Do keep visiting:)

KJ, Thanks a load for your sweet & encouraging words. I am happy that you liked my work.Thanks for the Welcome. Hope to see you around:)

GUYS,YOU HAVE MADE MY DAY!

Stunning imagery! I really enjoyed this. Thank you.

Hi Deepa! Thanks for your comment on my blog. Try again! Movies get stuck on youtube all the time, sometimes if there is a blip in your connection, it just cuts off. But do try again, I think you will like it!

~Wonderful art this is!
When I was young I tried to paint on glass I did vases etc, but never thought about painting on a flat surface so you get a painting, this is clever!
I love the 2 women in the window!!
Colored glass always has something magical!

Nice you are playing the pay forward!

have a nice weekend!

Cathy, I'll surely try. I can see that it'll be amazing:)

Marianne,Thanks. Even I try it out on all sort of surfaces as possible. I've done on small & big vases, bottles, flat surfaces etc. Glass has the magical quality. It emits such beautiful shades.

I am too excited to play it forward!

Incredible works! Wow, you are so very, very talented and gifted. These are stunning, all of them. The colors and the poses are just superb.

I also enjoyed Missy's travels below. You are hysterical!

Bella, I am so happy to hear this from a highly talented artist like you. I am so overwhelmed:)

These pieces are beautiful. Small talk has such a fun level of complexity, emotion, and color - while enlightenment has a calmer demeanor, with a focus on color and nature. Very nice.

Thank you so much for your comments on my blog, they mean a lot to me.

Peter, this is indeed a surprise for me. I am ecstatic that you like it.Your comments mean a lot to me too...Thanks!

Thanks a lot friends for your comments inspire me to do better, everytime!

Your glass art is beautiful.
I like the richness in the gold
for Radha-Krishna, and the vivid
colors in Enlightenment with
Meerabai's mesmerizing pose.

Also, the women engaging in
conversation in Small Talk was a
delightful piece. How interesting
to discover that there was a story
behind the bangles.

Such great talent you possess.

loved it deeps :D
superbb... esp the Radha Krishna.. and the small talk too :D
you Rock :D completely :)

Well written. I have a similar artwork at home...