Artist Trading Cards (or ATCs) are miniature works of art about the same size as business cards and thin enough to fit inside standard card-collector pockets, sleeves or sheets. The ATC movement developed out of the mail art movement and has its origin in Switzerland. The cards are usually traded or exchanged rather than sold.
M. Vänçi Stirnemann originated the idea in 1996, holding trading sessions in Zurich, Switzerland.
Here comes my first collection: I wanted to present to you all a glimpse of Indian Art. This is a Series(sets of ATCs that are based on one theme but that are different are called series)
1. Kathakali: This is a traditional artform of Kerala where I am from. It is a classical Indian Dance Drama noted for its attractive make-up of characters, their elaborate costumes, detailed gestures and well-defined body movements presented in tune with the anchor playback music and complementary percussion. It originated in the country's southern state of Kerala during the 16th century AD, approximately between 1555 and 1605.
Its a watercolor with gold paint for the crown. 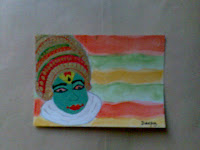 #1 Picked by Lynn
2. Conch Shell: It has a great significance in mythology. It is supposed to be the primordial sound of creation. Each Conch shell in the famous epic MAHABHARATA has specific name like Krishna's conch shell was known as Paanchajanya. It also has scientific significance.Try holding a conch shell to your ear, the sound of the ocean humming gently can be heard. It is actually the natural vibration or cosmic energy of the earth that gets magnified on entering the conch shell. These unique whorls are directed clockwise in perfect synchronization with universal harmony. That is why a conch shell is blown during sacred rites to get rid of negative energy.
I've done this with sequins and glitter and outlined with embossing liner. 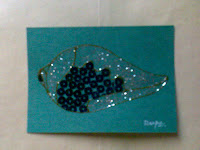 #2 Picked by SOUL
3. Patachitra Painting: Patachitra is a distinct art form that originated in Orissa. It is mainly based on the religious paintings that revolve around Lord Jagannath at Puri's famous Jagannath Temple. Patachitra makes use of bold and vibrant colors and is painted by a community of artists in Orissa called Chitrakars. Patachitra originated in the 12th century.The artist uses fine brushes made from the hair of a mongoose or rat or coarse brushes made from the buffalo's neck. Keya plants were also used for drawing thick lines. (I made use of my very own brushes from camlin & dynasty!!)
I've used Watercolor and fine liners. 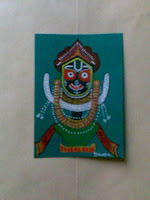 4. Chikan Kari: An integral part of Indian culture since 655 AD Chikan Kari was strongly rekindled by Moghul queen Noor Jehan in later date. It not only enjoyed patronization of the Moguls but also attained perfection as the exquisite needlework and hand work underwent further honing and refinement. Lucknow has still sustained an unrivaled supremacy in producing the finest Chikan in India. It is an art of hand embroidery done on men and womens apparels. 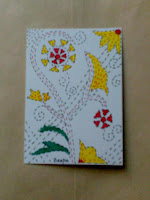 5. Elephant: Elephant is again very auspicious for us especially in Kerala. It is a part of all temple festivals. To make a ring from the hair of elephant's tail is supposed to keep at distance the 'fear' in children and adults alike. Hope you see a semi-kundan stone on the elephant's back:) 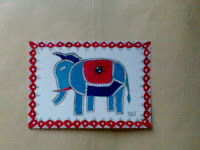 #5 Picked by SOUL
6. Warli Painting- Tree of Life- Warli art is an ancient Indian folk art tradition of painting of a Maharashtrian tribe called Warli.. Historians believe that the Warli tradition can be traced back to as far as the Neolithic period between 2,500 BC and 3,000 BC.The Warli paintings essentially depict the basic principals of life which are main theme or basis of any tribe. Their major designs include the harvest season,celebration, wedding, rituals and births. The trademark of Warli paintings is the use of geometric designs such as triangles, circles, squares, dots and crooked lines are used to depict human figures, animal figures, houses, crops etc. Warli art is known for its monochromatic depictions that express the folk life of socio-religious customs, imaginations and beliefs. Predominately white color is used on a red earthen background. (I've tried it on blue:))
Used watercolor. 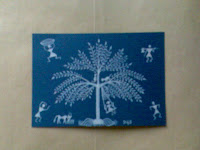 #6 Picked by Lynn
7. Madhubani Painting- Women Drawing Water- Madhubani painting comes from the Indian villages of Madhubani and Mithila in Bihar. These paintings are done on various mediums such as cloth, hand made paper and canvas. The main themes of Madhubani paintings contain images of Hindu deities such as Krishna, Ram, Shiva, Durga, Lakshmi and Saraswati. Also you will be able to find beautiful Madhubani paintings of sun, moon and tulsi or the sacred basil plant revered very much by the Hindus. The themes of daily activities, nature, flora and fauna and Hindu Gods are the most prominent.They are characterized by the vibrant and bold use of colors and traditional geometric patterns that supports the main theme.
Used watercolor and fine pens. 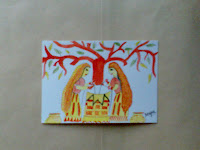 #7 Picked by Cris
8. Face and Hands: This is my own depiction of some wall art form. In the midst of doing all this artform, suddenly I felt a need to come up with some thing. I had seen such hands in some art form. So I blended it with a half-seen face:)
Used watercolor alone. 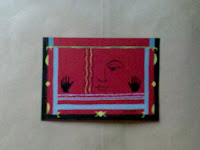 9. Warli Painting- Peacock- I've already given the description of this art form. This again shows the connection of nature and man which is evident in all artforms of India as it's considered that man and nature are inseparable.
Used watercolor alone. 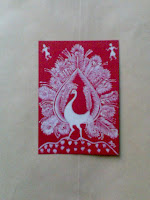 #9 Picked by Cris
10. Palki (Palanquin): This doesn't follow any tradition. It was an integral part of Indian wedding though modern matters have taken over these days. The bride was carried to her in-laws house in it. They were also used to carry the wounded from the battlefield and transport them. Today they are also hired during pilgrimage to carry the customers up the steep hill.
Used watercolors, silver liner, sequins and semi-kundan stones. 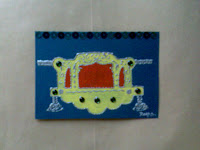 #10 Picked by Teri
A glimpse all the ten atcs: 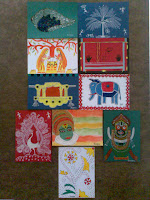 Now here's your turn...SOUL, TERI, LYNN, CRIS and MIM. I am to get an atc from Mim too. Two each for you all. Hope you understand why I took so much time to come up with this. I did a study to get to this. 3 weeks Phew!!!
I earnestly hope that you like it!
Ref:
Wikipedia
http://www.lifepositive.com/Spirit/traditional-paths/rituals/shells.asp
http://www.craftsinindia.com/
http://www.hand-embroidery.com/history-of-chikankari.html
Posted by Deepa Gopal at 11:34 AM

deepa, I don't know what to say ...true loveliness and simplicity. you have excelled yourself, and i am so honoured to be a of the recipient of two of them. may i please have 'conch shell' and 'elephant'. i will treaure them always.lotsa hugs from me.xx

Thank you so much for making me do this:)

i spent a long time trying to decide which one i loved the most, but i failed miserably. ddepa each is a complete gem.i loved them so much!!! and you've obviously put in so much hard work and love into each...
i love you. i wish i had even a fraction of your talent.

Wow! amazing, you are really talented!

Thank you so very much L'girl. I am thrilled to hear it. You are obviously immensely talented in a different genre. Anyways everything is Art, isn't it?

Thank you cathy:) I am glad to hear that!

All are uber awesome Deepa.

But since I love the cikan work of Luckhnow a lott! It stands as my personal favorite.

Deepa I cannot tell you how absolutely gorgeous I think each and everyone of these are.

The ladies are so lucky and I couldn't be happier for them.

Wow. Seriously every single one is incredible.

They are actually the nicest set of ATC I have ever seen.

Hello Deepa! Thanks for passing by my blog! I love your ATC's - I'm considering branching into these myself too! I love the series you've produced - it must have been so much work - all that research and then the illustrations! Excellent work! On another note - I used to live in Dubai too! In fact I read your post about ARTE which I'd heard about from my dear artist friend Judy Roberts! I also knew Miriam Walsh when I lived there - small world eh?!!

Deepa, I like 7 & 9.
women drawing water and the peacock one. so pretty. I just got up to see these.

Changed my mind. instead of 7 women drawing water. I'd like number 4. the chikan Kari.

Oh my goodness Deepa, these are all gorgeous! And you want me to choose two out of that beauty? I love that you used your homeland for inspiration.

This was a tough choice but I will pick #5, the elephant (I love elephants) and #4 the Chikan Kari.

Gosh, these are such beauties, all of them! Thank you so much.

Deepa, OK give me the washer women like I said in the first place and let Teri have the chaken Kari. OK?

These are all wonderful. I chose #6 and #7 if they are still free.
Thank you so much. I love that you did the history of each and will copy that out if it's okay with you to go with the cards. ???

Oops, looks like Chris took #7 after all. Give me any other for my second one...they are all wonderful. #1 is interesting. I'll take it. LOL
Hugs and many thanks.

Wow, those ATCs are just gorgeous. I wanted the elephant too!! They are truly unique. Well done you.

Renee, you don't know How much your words have lifted my Spirit!!! You made my day!
You are so kind to say that!!! Thanks a ton!

Welcome and Thanks Caroline. It is indeed a small world!

OK...thanks for making your selection Ladies:) They are yours!!!

So nice of you to say that BT...hope we'll trade sometime in the future:)

No 3 and 8 are mine! I thought I had left a comment yesterday or the day before but don't see it. Anyway - lovely ATC's - can't wait to see them in person.

Beautiful! I love them all!

Yes..They are yours, M. Didn't receive ur earlier comment. Thanks:)

Thanks a lot yoon c:)

Deepa! These are marvelous, every one. Wow, each one so different and so very meaningful. They are tiny treasures. :D

The flower girls on glass? I'd be honored! Wow! Do whatever you like with them. I'd love to see.

Oh wow they are exquisite!
Lucky receivers!
If you ever wish to trade one with me I would love to!

have a nice day!

Deepa, thei are all beautiful. Kathakali brings back memories and so does the Peacock. You are so good in this :-)