Sharjah International Book Fair happens every year at the Sharjah Expo Center. This year it was filled with much more zest than I have witnessed in the previous two years. This year some Great authors were associated with it. They  were making their special appearances to the delight of people like us, the Book Lovers’.

Nov 23rd was the day Mr. Ruskin Bond, got to the Dome where the authors meet and interact with the audience. According to RB he was seeing something like that for the first time, “It is like sitting inside an Ostrich egg…with good company.” 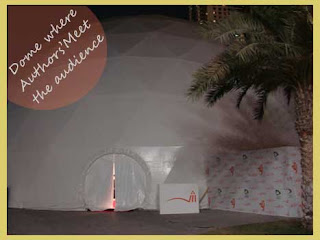 RB did have company on the dias; His Excellency Sanjay Varma - Consul General of India, Mr.Kalpesh from Rupa Publications and Karen who joined Mr.Kalpesh in the Talk with RB.
The first story that I read of Ruskin Bond was The Night Train at Deoli. It still lingers in my mind. The visuals are still there and Prof. Vijay Nair’s words are still in the air. It’s as if I haven’t got off the train yetJ. That was when I fell in love with his simple yet intense web of words. I was 17 then.


Yester’ I heard RB’s voice for real and I was getting goosebumbs! My god! Was this real!!!!! His smile, his gestures, his speech…so surreal! Yet, he was there sitting on the dias speaking to us of his experiences and tidbits which was otherwise not so common or shall I say impossible for us to have heard it.

First : In a School


Ruskin Bond was in a school where he was interacting with kids. The teacher there asked one of the students (a 10 year old):

“What do you think of Ruskin Bond as a writer?”

She looked at him, observed him up and down and replied:

“You are not a BAD writer!”

Second: First Work
To one of the questions asked by Mr. Kalpesh…
Is there any work of yours, still in the closet, yet to be published?

RB said that he wrote his first story when he was 8. The flaw was that he included his teachers as characters in the story. He wrote about his Principal’s wife who fell from the stairs and such other interesting tales of his teachers. Once he had it in his classroom which was obviously confiscated by the teacher which was later submitted to the Principal. RB got his summons from the Princi’s office and obviously he was flogged for wasting his time with his useless writing. His first work, story reached the Princi’s trash bin in bits and pieces. That was end of his first story!

Obviously it didn’t see the light of day. He advised young writers’ not to include their teachers as characters and if at all they wanted to then do it once they are out of school.

Third: At the Bookstore

When RB was a novice and his book had made it’s appearance in the bookstore, he used to meander through the store to feel the thrill of seeing his work in paperbacks. And one such occasion he found his book dumped under a pile of books by authors famous during that period. He looked around, no one was found observing him, took his books from under the pile and stacked it on top. Immediately, he heard the person at the cash call out “Yeh nahi chalta…neeche hi rakh deejiye!” (It roughly means “It doesn’t sell. Keep it underneath itself.”)

Fourth: At the Location of 7 Khoon Maaf
RB says he was offered a role in 7 Khoon Maaf, a movie based on his book – Susanna’s Seven Husbands. His role was small where he had to kiss the cheek and give an advice to the lady lead played by Priyanka Chopra. The first time he did it, it turned out to be clumsy. He had to retake it a few times and after the twelfth retake, the director, Vishal Bharadwaj said “Now Mr. Bond, you are doing this on purpose!”

On one of his journey to a book fair or some meeting, he was traveling by taxi. The driver sped so fast that he had to pick on his brake at some point so harshly that RB’s reading glasses toppled and fell over the Driver. The driver on procuring the glasses refused to return it to RB saying that if he wore it may be he could become a writer too. In return he readily offered his glasses to RB. RB replied that if his glasses could make the driver a writer, then the driver’s glasses could make the writer a driverJ

There was a book signing session as well. There was too loud a hue and cry by the teens for it. I had bought a couple of books – a book of verse, a journal, a memoir and two for my daughter who wanted to get her book signed by RB as well. I must say she was a great sport. We went after the rush and got it signed. We were so very thrilledJ 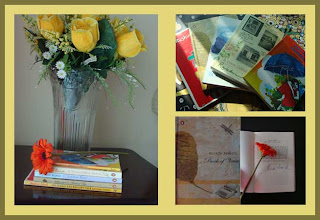 Wow.. what a moment it would have been for you!! Its very nice that you share it too!! and lovely anecdotes..!

Wonderful read! Amusing anecdotes! His innocence and humility can be felt in this article.. :)

Lovely anecdotes. Thanks for sharing :)

@Chakoli and Krishnapriya-Sure,I was...It was like a Dream (Come true)!

@Arti,You said it! He is so very humble and so innocent. My daughter said "Cute Granpa"!

Happy to know that you had a wonderful experience. Felt as if I was there too...

Nice stories!It seems you had a great time.Mr. Bond has been my favorite writer since my childhood :)

How wonderful! Hehehe, he does sound like a very entertaining man. Even in life, he collects his little stories. I have not read his books, but he sounds like an excellent writer!

Deepa, am envious of you that you got to meet Ruskin Bond!! He was my childhood hero, and happens to remain so, now too :) His books triggered a deep love for the mountains and nature in me. Thanks for sharing this post!

Your coverage has been superb, indeed we have included your output in our aggregated blog:
www.shjintlbookfair.blogspot.com

Omg! How did I miss this golden chance? I live so nearby and yet couldn't make it to the fair.

Anyway, thanks for sharing all from the book fair. :-) It was a lovely read.

It's so good to be there to witness such a great talk. Moreover by Mr. Ruskin, sharing his insights with the audiences and you Deepa!

I wish I could be there too because I am book lover too!

Wonderful! I think, he WAS doing it on purpose for the 7 khoon maaf shoot :p Rusty-es never grow old, you see!:)