Dear Friends
My new Kerala mural painting of Lord Krishna. I have used acrylics on canvas. Hope you all like it. 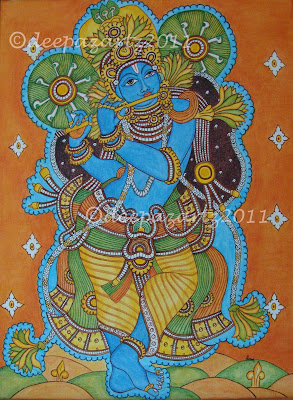 Lord Krishna, Avatar of Lord Vishnu
18x14 inches, Acrylics
Kerala Mural Painting on Canvas
For non-Keralites, today is Kerala Piravi (Birth of Kerala) Day. The state of Kerala was formed on 1 Nov, 1956. Prior to that it was three independent provinces Malabar, Cochin and Travancore. Kerala got it's name after the first ruler, Keralian Thamburan, who ruled one of these provinces.
Mythologically, Kerala was formed when Parashuram, the sixth incarnation of Lord Vishnu, flung his axe from Gokarnam to the sea and the sea receded to form Kerala.
Happy Kerala Day To All The Malayalees (& to all others as well:)) Around The World!
Love 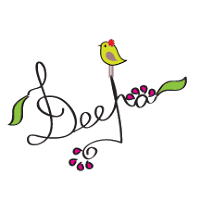 Oh WOW! What a glorious painting! The detailing is exquisite! Happy Kerala Day!

Wow, that is so beautiful Deepaz. You are truly a gifted artist. You should sell on Fine Art America. Your paintings are really awesome. Thanks for the nice comment on my blog regarding the El Dia post. :O Take care.

This is so beautiful. Loved it!

BTW, thanks for visiting my blog!

The painting is amazing... Great work!

A bit of unsolicited advice, please try to make the font a little more easy to read standard font.

do you sell your work? I would buy it.

Wonderful painting and thanx for sharinf such valuable facts about Kerala. I really didn't know about them.

Loved this one. Beautifully painted.

Great art.
Happy Kerala Day to you too, though belated.

As a Keralite (who has lived outside Kerala more than inside) I wonder whether there is really much to be proud of my home state now.

Super!!! I have a soft spot for murals, though I have never done them. I guess growing up near a temple with a lot of murals on its walls (which, unfortunately is in a pathetic state today) is the reason. And of course, Lord Krishna is my favorite too...
Looking forward to more from you....

Lovely Mural!! Though I would have preferred to see it without the watermarks, they sort of distract from the actual picture. Happy Kerala Day to you too!!

I am speechless Deepaz. This is sooooooooo beautiful.May lord Krishna Bless you and your family. Happy Kerela Day.

Amazing & Inspiring. You have great talent.. May Lord Krishna bless you:)) Thanks for sharing!

Superb! And this painting is so unique and appealing! Love the colours that you had selected and the composition is excellent!

You must have spent lots of time on the details. Happy Kerala Day to those that celebrates it!

Welcome to my space Roopz, Sunil, GeetS, distinctly uniform, Life unordinary, Neeraj, Ashwini, Harish, Bindu, Cedric and Shalini...Love to have you all here. Hope you had a good time here and do keep visiting.

Thanks Gloria dear. Truly flattered by your comment. Do you really think so?! Thanks. Thanks!

@distinctly uniform, will check it out friend. Thanks for the suggestion.

@Life unordinary, Thanks for your interest. I do sell. You could mail me for the details. My mail id is in my profile.

@Matheikal, Welcome sir. I spend most of my time outside Kerala and 'haps that what keeps me tied to it as well. I long for my home & my people...So what if we are living outside, we do contribute to our society right. We should and can feel proud:)

@Nishdil, Thanks for your wonderful words. It must have been great to live near a place so very artistic. I really hope that such beautiful places are preserved by the concerned departments for posterity. You should try a hand if you are so interested. I am sure it would come out well. Do keep visiting:)

@Welcome Ramakant. Thanks a lot for your kind words. I do understand when you say about watermarks but plagiarism is so much in vogue these days, many of my friends had been awfully affected by it, that I thought this is the least I could do to preserve my work. Sorry for that distraction. Hope you would understand and let that not hinder your visit and comments in this space:)

@Thank you very much for the blessing Seema and Sanjeev:)

@Thanks Yoon See dear. Yes, I did spend a lot of time on my Krishna. Murals do take a lot of time but once completed you will be more than happy:)

i will surely visit again