Girl with the Owl

Recently I was part of two exhibitions - 'Visions: Prosperity' held in Indriyam Art Gallery, Mattanchery and the Kerala Lalithakala Akademi's Annual State exhibition held in Durbar Hall Art Center, Ernakulam. There is an upcoming show, FineXT Award and National Exhibition of Mini-Artwork-2017 which is to be held in Bhopal, Madhya Pradesh in October. I am deeply touched by the Universe's conspiracy in helping me out...as they say. Since I had been busy with exhibitions, travelling between Palakkad and Kochi, writing, creating, managing homely affairs and everything in between that takes up an awful lot of time, I couldn't post last week.

Female forms, feminine psyche, our issues and our alter world is something I am totally interested in. Somehow I reach a zone I hadn't been looking for...it just comes naturally but gradually. It's a subject I can't shake myself off for now anyway. Every woman carries a world within her and that is something her own whether that be one of happiness or otherwise. Sometimes one doesn't even know that it exists until a situation arises. Sometimes it doesn't make sense while at times that is all what is left. To explain such nuances and subtler emotions is also highly dissatisfying probably that's why we end up painting. There are some feelings where words lack. Mostly it is the news from different channels or newspapers regarding women and their condition that hurts me...it leaves a gash somewhere and subconsciously starts invoking it. For this, I did have a reference photograph to draw from.

'Visions: Prosperity' had 21 artists; all women..so it was basically about female perspective and it was quite fascinating to see them all. How our collective psyche works! There's this invisible thread that links us all...knowingly or unknowingly. And that's the beauty of such getting together. Thanks to Narayanan Mohanan,  Sreekanth Nettoor and Onyx Poulose, the bearers of Indriyam Art Gallery for this memorable opportunity. It was also wonderful as I made some new friends and strengthened some old bonds. Women prowess! 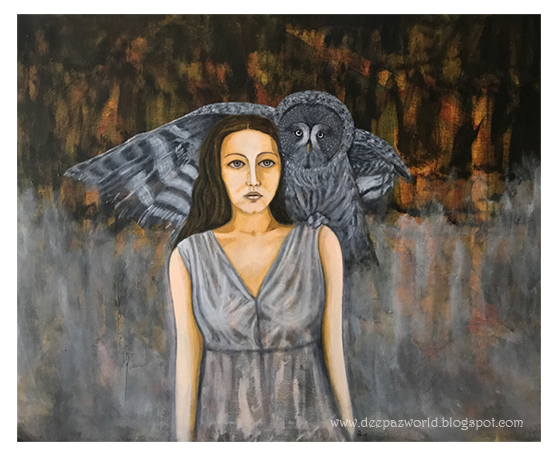 In the quiet and
Still, my mind kept whispering
Hoot-a-hoot, all night.

(my haiku as title)

I will be publishing a really interesting interview of an absolutely wonderful artist soon. So stay tuned.

Wow this is a breathtaking piece of art.

Wow such a beautiful work!!

wow this is a stunning painting Deepa and a lovely haiku to go with it. Sounds like you are one very busy artist. Happy PPF!

*wow* this is a wonderful work of art, I love it !!!
Happy weekend
Elke

Good to know about the exhibitions,its always great to be a part of such events especially with your works.
Painting is beautiful and the haiku also.

That's why your paintings say a lot 😊