Inktober has reached mid-way and I am lagging 5 days as I had to travel to Dubai, just 3 days; the fourth day we were travelling back before my visa expired. By the time I got back, I was down with fever and severe allergies! But I lost one day because of my health but tried to go with it even though my posting time got delayed. So here's Week 3 and 4... (In case you haven't seen...Week1&Week2 )

I first sketch it out on an ordinary A5 size paper and when I feel it's right I transfer it onto my A5 Sketchbook and then colour it with my Winsor & Newton or Liquitex inks. I am doing monochromes in this series.

Thank you so much for all your wonderful comments here, in FB and on Instagram. It really inspires to do more! Love you all! 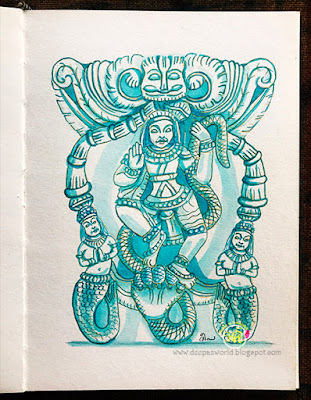 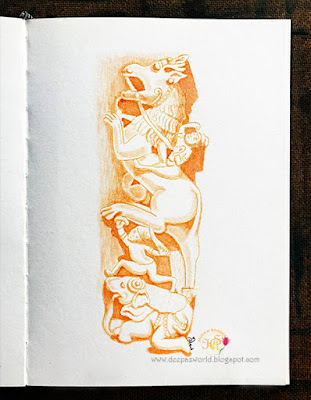 Day 14 - it’s a sculpture from Pala, Bihar.
Looks like a scene from the war front. There’s something in here that I like it a lot; must be how one form fuses into the other particularly in the vertical format! 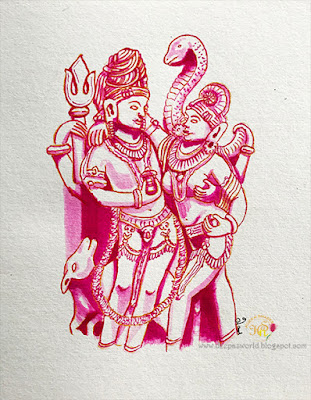 
{*Aside - "I find working with purple and pink inks difficult in this series...they have a mind of their own!"} 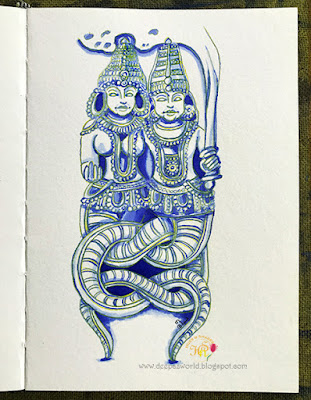 Day 16 - "Naga-Nagini"
(mating snake couple) from Belur.
Belur and Halebidu are twin cities in Hassan district of Karnataka known for the exquisite and intricate temples carvings which are UNESCO world heritage sites. They were built by Amarashilpi (‘immortal’ architect) Jakkanna Acharya under the Hoysala Dynasty.
One of my personal favourites! 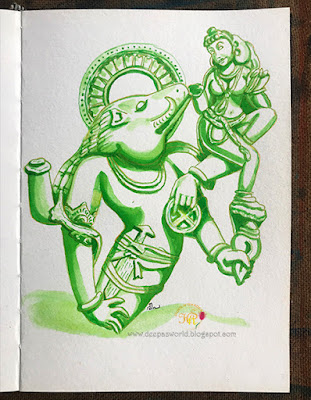 Day 17 - "Varaha"
(the boar avatar of Lord Vishnu) with Bhudevi (Mother Earth).
This avatar, according to mythology, was adorned to save Mother Earth from Hiranyaksha, the fierce demon. This sculpture is supposed to be from the 8th or 9th century! 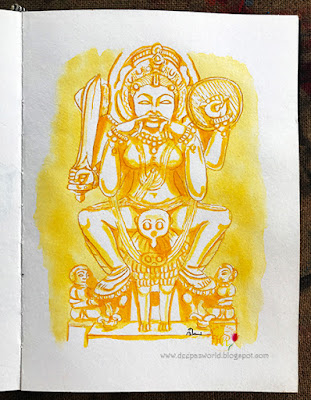 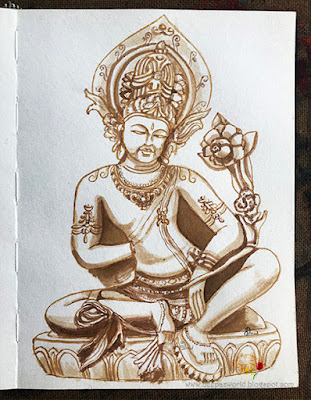 Day 19 - “Avalokitesvara”
(earthly manifestation of the self-born eternal Buddha Amitabha; the bodhisattva who embodies the compassion of all Buddhas). The bodhisattva is depicted in different cultures as either male or female. This is referred from a photo of a 10C sculpture found in Pala, Bihar. 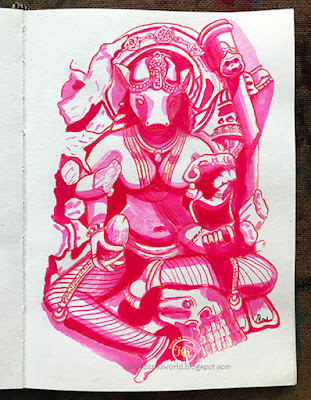 Day 20 - “Vrishabha”
(bull, here the female counterpart of Nandi - the gate-guardian if Kailasa, the abode of Lord Shiva and the vehicle of the Lord), Yogini temple, Khajuraho, 10c. 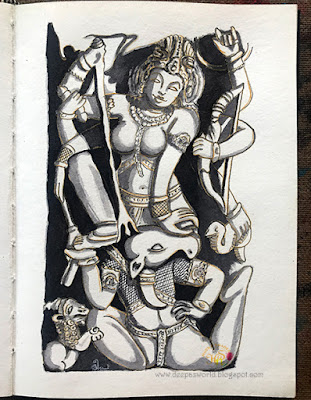 Just 10 more to for me while only a week is left for the Inktober to be officially over. I am going to finish it but maybe I will run a little into the first week of November. But that's ok, right! The important thing is to finish a body of work!

"So how's your Inktober going??"

Incredible artwork Deepa. I'm in awe of all the detail. Interesting your comment about the problem working with pink and purple inks... they look so good, you've obviously gained control of them ;D)
Great work and thank you for sharing Deepa. Happy PPF!

Simple amazing works of art. You have such a talent.

These are absolutely wonderful! Happy PPF!

It is so mesmerising to see what you create...just amazing!!

Your artworks never cease to amaze me, Deepa! These are absolutely incredible, the details so fine and neatly done.

It's really a result of hardwork. Beautiful work

Mesmerizing! I loved how you have picked themes from our tradition, culture, and architecture and represented it so beautifully.
Great artworks...Kudos :)