Inktober is here again and yes, it’s pretty exciting!! I took part in Inktober last year for the first time and fortunately I was able to complete 31 drawings in 31 days. Hopefully this year too! Like last year I am again not going with the official prompts and I have my own theme and I am sticking to temple sculptures, our very own centuries-old traditional Indian sculptures. I have references from google images and Pinterest. Most of the information is unavailable though like where it’s from and when it dates back to. I am concentrating more on the forms and shapes and the feel of it.

I first sketch the image on an ordinary A5 size paper and when I feel it's right I transfer it onto the sketchbook and then I ink it. It's a bit of tedious process though and it is consuming a lot of time but then I am enjoying the whole process though. I have limited my colours to one and a couple of times two, to have the feel of monochrome. I had intended to begin my Inktober post last Friday but unfortunately, I couldn't. So this is Week 1 and 2 together. 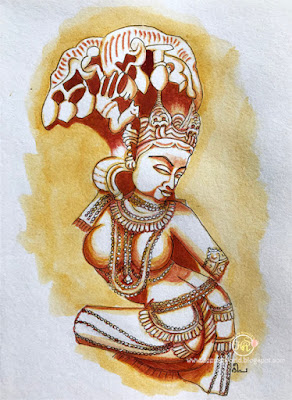 Apsara (celestial singer or dancer) or *Shalabanjika
...either of these. 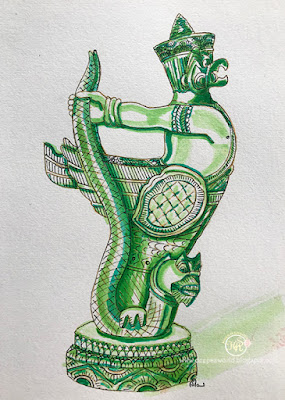 "Garuda and Naga"
Garuda is the “King of birds” and the vahana (vehicle) of Lord Vishnu. According to Hindu Mythology, Garuda has a synthesis of an eagle and human form; symbolic of birth and heaven while Naga represents death and the underworld. It could very well go with the prompt ‘poisonous’ as well. 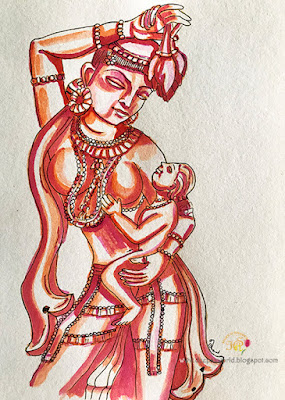 “Mother and Child”
I think this could go well with the second prompt “Tranquil” too...look at the child's face. 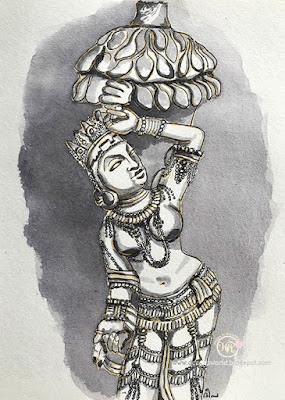 *Shalabanjika
11C from Khajuraho
- a woman’s sculpture with stylised features often seen holding a branch of a tree, sometimes mirror or lamp. They are often in poses of dance, music or even grooming themselves. They have complex hairdos and adorned with lavish jewellery. Shalabhanjika holding a tree is also a symbol of fertility. 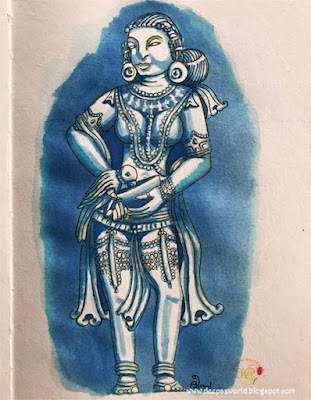 Shalabanjika in Markanda temple in Maharashtra, it is also called Mini Khajuraho. The temple is dedicated to Lord Shiva. 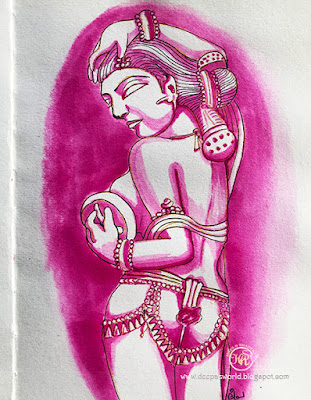 A grooming, adorning Shalabanjika.
This is a simple one. I am mesmerised by the complex ones that I have seen in many temples with gorgeous intricate work. Now that I have warmed up enough, I am starting my hand at that. 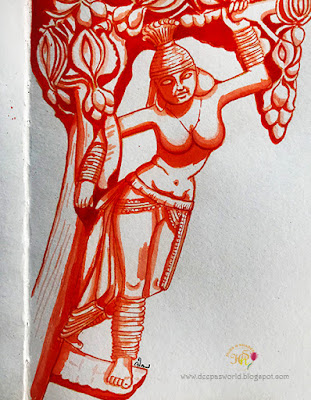 Shalabanjika on Eastern Torana (gateway) of Sanchi Stupa in Madhya Pradesh.
The colours are more peachy orange than the red that shows here! I loved this pose and the way she intertwines herself with the branch of the tree. 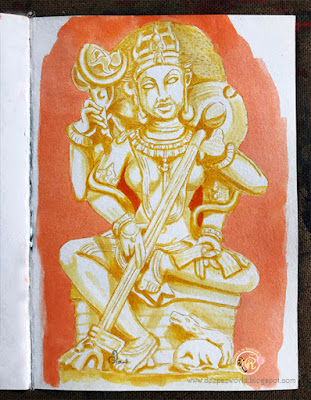 "Goddess Saraswati"
-goddess of knowledge, wisdom, creative arts and learning of all sorts. She’s part of the Trinity, along with Goddess Lakshmi and Goddess Parvathy. 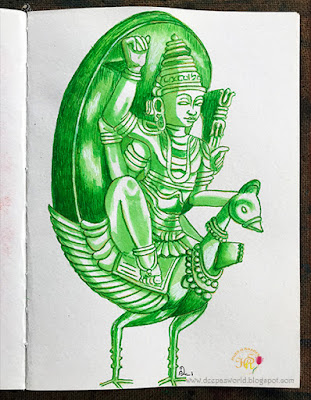 From Meenakshi Amman temple, Madurai.
The temple dates back to 1st century CE and finds mention in the earliest Sangam Literature. The temple has withstood the test of time and many foreign invasions and lootings. It was rebuilt and restored by Nayaka Dynasty and by various other rulers. It was again degraded during the British rule and was completed only in 1995. The temple is famous for Ayirakkal mandapam (1000 pillared hall) built by Ariyanatha Mudaliar is well-known for excellent engineering skills blended with artistic vision. There are several other mandapas too. 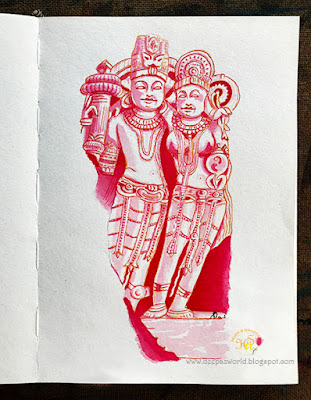 “Vishnu-Lakshmi”
Reference is of a 10C damaged buff sandstone from Uttar Pradesh. 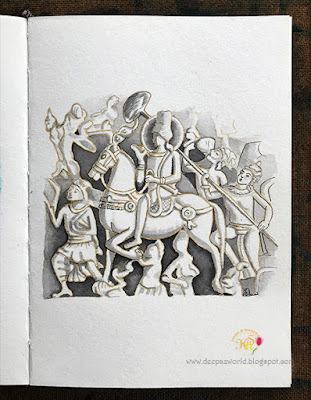 A "fanfare" - trying something different! 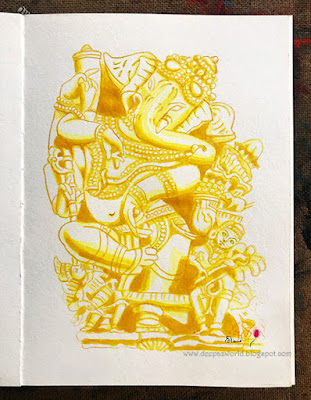 "Dancing Ganesha"
One of my personal favourites! What do you think??
I love Ganesha in all forms!

This is actually a wonderful journey for me trying things not tried before and I quite like the outcome too though it’s consuming a lot of time. I am not sure whether I will be able to complete with some travelling coming up next week!

So which one is your favourite here (if any!) ??

These are all beautiful. Hard to choose a favourite. I love them all.

oh wow- these are fabulous! Your details are just amazing, and I love that you have explained their symbolism. Happy PPF!

They are all lovely, but I'm struck by the ones in color more than the gray one. Your work is always amazing. What a grand temple you're capturing.

OMG these are stunning.

I've popped back to this post after seeing your latest.
The idea of monochrome for these inks is most suitable, it allows us to see their beauty to the fullest extent.

Awesome!
I love them all. So tough to choose just one!
Keep up the great work!