It's Biennale days in Kochi and one may find art everywhere - every nook and corner - if one has an eye for it (or even otherwise probably). The main venue Aspinwall and the neighbourhood is loaded with people from all walks of life enjoying art in all forms of it. Biennale commenced on 12 Dec and will continue until 29 Mar 2019. I made a short visit, need more time to go around, soak it all in. So here's the first glimpse and let me remind you these are not lasting impressions as you have to make your own and my own may change in the re-visiting(s) as well.


Anita Dube, the biennale’s first woman curator, has worked enormously to put together an array of artists and artworks keeping with the belief that “through the potential of social action, coming together, we ask and search for questions, critical questions, in the hope of dialogue.”

I was pretty excited when the names of the artists' were announced, the name that excited me THE MOST was William Kentridge who is very often described as South Africa's Picasso. I have always loved his works but had never in my wildest dreams had imagined that I would get to see his insightful work - a combination of figurative art, dance, music and mime. To be in the presence of such a work with so much history was is in itself 'a-pulsating-experience' for me! It is a personal response and not a commentary on the work itself. They are more like moving silhouettes that talk about the socio-political scenario of South Africa. His works reflect the aftermath of apartheid and colonialism and his landscapes are usually charred industrial and mining lands around Johannesburg. He uses drawings, erasures and re-drawings and films it. His projects are massive and yet they gloriously amalgamate the different aspects of visual art, theatre and performance, film into one decisive and ultimate work. Here's a small video-clip-

Then there are some other well-known names like Marlene Dumas, Sue Williamson, Anju Dodiya, Priya Ravish Mehra,  Guerilla Girls, Juul Kraijer, Shilpa Gupta, Monica Mayer and so on... 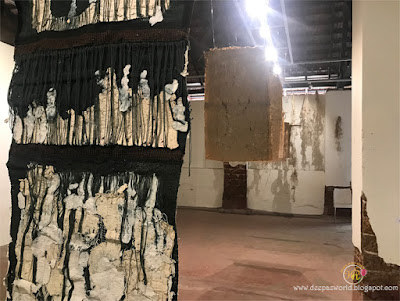 Priya Ravish Mehra from New Delhi holds a special place in my heart, one of my favourites, for she was a humble human being laden with love and hearty laughter that would make one join in the mirth. I had the chance to meet her personally during the previous Biennale and she even accompanied me to visit our Community project which was part of a Collateral Project of 2016. She sat through my whole video, clicked a picture of mine, introduced a couple of friends to her and then I took her to some of the galleries near-by. I pay my homage to that Amazing Soul.
Priyaji was inspired by Rafoogari and her works were the beautiful testament to the weavers and their amazing craft of darning. She extended the idea of 'invisible' repair in darning by combining fragments of discarded weaves with paper pulp, reconstituting both fibres since they arise from the same source. Duality manifests as unity in her work celebrating the metaphor of 'reet' which stands for cosmic truth/order in the Indian philosophy. 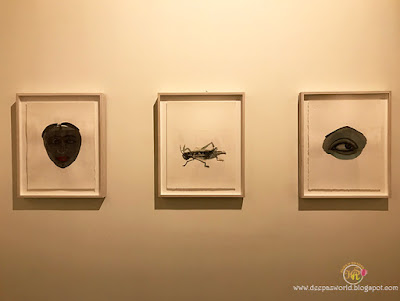 Vocabulary - series of 20 drawings
Ink and acrylic on paper

Marlene Dumas is a South African artist who now lives in Amsterdam. She is a prolific artist painting in Oils and Ink on paper. She stores all kinds of newspaper-magazine clippings which become the 'seed' of her works. Her subjects vary from children to unfamiliar adults to great personalities and the like. She uses the figurative form which has a phantom-like appearance, her technique more like swift, gestural watercolour washes, stains and delicately drawn images. Marlene's works here depict "small, inconsequential moments, objects and beings as an attempt to quieten our personal demons as well as those of the world around us." 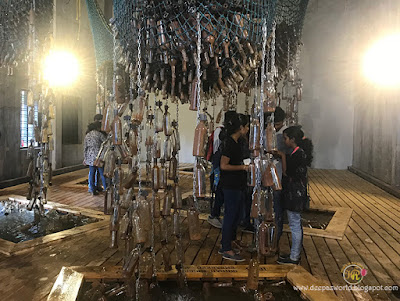 Sue Williamson is a South African artist whose work mentioned above recalls the historical past of South Africa welled up with heart-wrenching stories of the slave trade and apartheid and the reconciliation of the post-apartheid. "First shown at Art Basel Unlimited in 2017, the installation is a visual representation of the accumulated records of vessels responsible for transporting captives from West Africa to the Americas during the 19th Century – a journey repeated more than 30 000 times that was known as ‘The Atlantic Passage’. Williamson’s work recalls a small handful of those voyages. This remembrance takes the form of fishing nets, filled with glass bottles containing traces of earth, suspended above tanks of water. Each net represents one ship’s journey across the Atlantic. Every bottle, in turn, is hand engraved with information about one of the slaves on that voyage, including their African name, the new ‘Christian’ name given by the slaver, the country of origin, and the age, sex and height of the person. The installation is an extension of Sue Williamson’s acclaimed Messages from the Moat (1997), first exhibited on Okwui Enwezor’s 2nd Johannesburg Biennale, which listed the slaves brought to the Cape of Good Hope by the Dutch East India Company between 1658 and 1762." Rehearsal for an Apocalypse

Born in Mumbai, Anju Dodiya's works have been meditations on the artist as the self-referential protagonist. She adopts a wide range of art historical sources from Japanese Ukiyo-e prints, medieval tapestries, and Renaissance paintings to newspaper photographs. In Anju Dodiya's work, the viewer encounters the artist as a calm individual traversing through the infinite cosmos signifying her insignificance as a witness of civilizations past and present. I was primarily interested in her miniatures which I felt were self-reflective and said that they were "based on Bible reproductions construct images of fear that can be viewed as talismans to distance the fear." 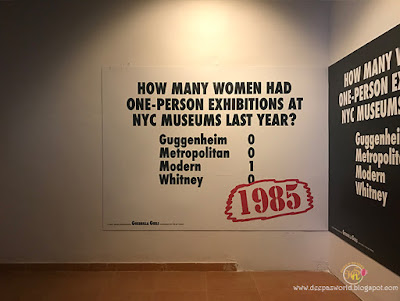 "The Guerrilla Girls are feminist activist artists. Over 55 people have been members over the years, some for weeks, some for decades. Our anonymity keeps the focus on the issues, and away from who we might be. We wear gorilla masks in public and use facts, humor and outrageous visuals to expose gender and ethnic bias as well as corruption in politics, art, film, and pop culture. We undermine the idea of a mainstream narrative by revealing the understory, the subtext, the overlooked, and the downright unfair. We believe in intersectional feminism that fights discrimination and supports human rights for all people and all genders."
I couldn't have described them better. They are a group of anonymous activists who fight against sexism, inequality and racism in the art world. 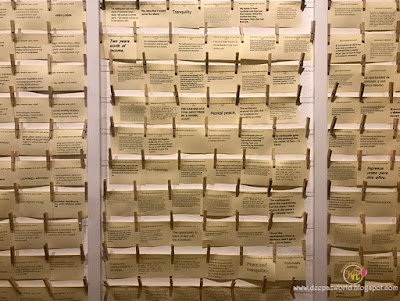 Mónica Mayer is a feminist Mexican artist, activist and art critic whose work includes performance, digital graphics, drawing, photography and art theory. Her projects are always participatory or done in collaboration with other artists. She has continually devoted to bridging the complexities in different places across the globe. Begun in 1978 in Mexico City, 'The Clothesline' is the enactment of an ongoing participatory installation where the participants write their experiences from Kerala's recent floods and of sexual harassment heightened as part of the #MeToo movement and hang them on a clothesline - replicating the domestic act of hanging the laundry that many women share. 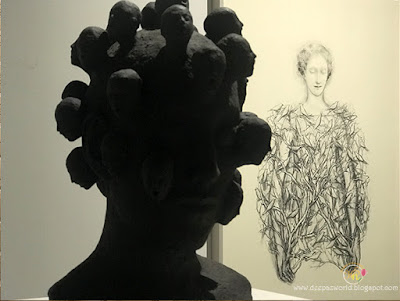 One of the artists' that impressed me most is Juul Kraijer as I could relate, feel connected to her frames. It was as if an extension of my own feelings! Juul Kraijer is a Dutch visual artist whose principal mediums are drawing and photography. She occasionally makes sculptures and video-works. It is definitely not an individual's story but expresses a frame of mind particularly that of the feminine psyche - the multitude of emotional and spiritual states as designed through the convoluted and knotted forms without much of a backdrop negating the sense of time and space. She likens them to "the Hydra, the multi-headed Greek mythological serpent," considering them "as vessels for open interpretation within the imaginations of whoever they encounter." And then there are other images where one finds animal and vegetation sprouting and/or mingling with the human form as if indicating the inseparable natural world. 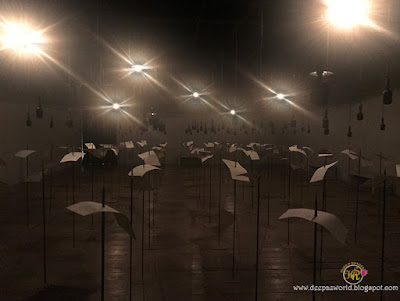 Shilpa Gupta from Mumbai has studied sculpture from J.J.School of Arts. Her works are embedded with the message that we are all actors in the political forces that regulate society. Her work makes obvious the invisible threads that bind various factions of society together, often sensorily challenging her audience to occupy subject positions of the 'other', even if temporarily, to initiate an empathetic understanding. "For, in Your Tongue, I Can Not Fit - 100 Jailed Poets" expands on the artists' investigations of political borderlines, and how they exist beyond maps to the invisible mechanisms of control and surveillance. It points to how orchestrated oppression is harder to detect as it renders those imprisoned voiceless and invisible. 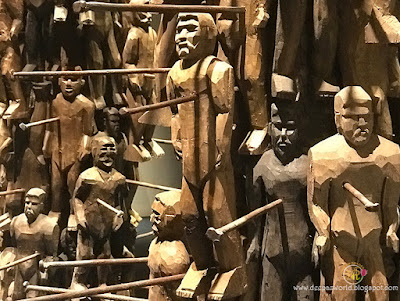 Vinu V V from Kochi is again a favourite of mine in this edition. He instils in us the sense of pride - coming from our own place (I haven't had the chance to see his works before though) - to see him displayed at this mega an avenue. He was also part of Shanghai Biennale. His installation takes you to a different realm - small and big at the same time. While on one end you have life-size wooden sculptures, in the middle of the room are 300 figurines nailed to the coconut tree trunks the reference clearly visible in Chottanikkara temple where women supposed to be possessed by spirits had to drive nails with the foreheads. Born into a Dalit family and having faced the harsh realities early on, Vinu is compelled to engage in discourses of social justice through his artmaking. Most of his works are structured around Dalit interpretations and re-readings of the social reformation that took place in Kerala by the end of 19th and early 20th century.

Are these displays on for the entire period? Or do they change? I saw William Kentridge's Refusal of Time in Cape Town several years ago and it was awesome! I will be in Kochi in February, in either the first or second week of the month. I will definitely want to catch some of this!

Joseph, they are on for the entire period until 29 Mar 2019. O yes, to watch it in person is just too surreal...it was for me!! This is just a glimpse of what is in store...loads to explore! Great, you are in for some amazingly awesome experience!!

Very informative and engaging. Thank you for sharing this one!