One of the artists’ whose works I could relate to most at many levels is perhaps Juul Kraijer, the dynamic Dutch artist. Her works are mystical and quite uncanny and it’s hard to explain its effect on us; they have this haunting mystery about it. Juul Kraijer started with drawings, progressed into sculptures and extended into photography and even short films. The instant I stepped in and laid my eyes on her works I felt connected. They are pretty intense and amazing as they reflect the emotional perceptions of self (whoever is looking at it and most pertaining to women, I feel). I probably felt this deep connection more so because I myself am often exploring the inner realms and the emotional-spiritual space than the external one. That doesn’t mean I am doing the same kind of work but it is women’s psyche that I am pretty interested in. That said the inner self is not exempt from the outer one and is always a twisted-reflection of the exterior (not generalising, this is often subjective). It is those very actions that take it to the inner-most suggestions and experiences all through our explorations. 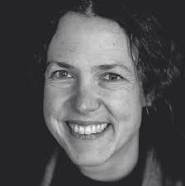 “The eloquence of my drawings I can't match with words. In spite of this, I'm asked so regularly and with such persistence to give a specific explanation, that I don't want to refuse out rightly doing so...Personally, I shrink back from interpreting my work, considering the fact that the meaning of a drawing is always ambiguous. If it were unambiguous, I would have chosen a more direct form than the poetic-associative one of visual art.” ~ Juul Kraijer 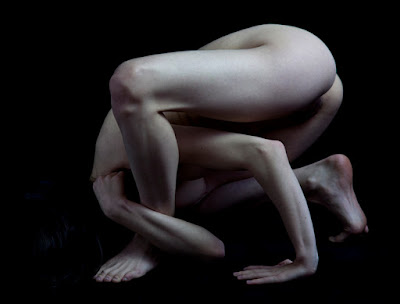 The awkward-contorted poses, the bleak-eerie look, the suggestions of duality, the connection of man and nature at the very core, the unusual juxtaposition of animals and self probably mentioning the basic animal instinct that man is supposed to possess, minimal and yet a taste of the elaborate is all served in one plate. Even when we try to understand others, we often fail to understand self. But then these days trying to understand others is not much in vogue; we often close doors at the slightest of misgivings. Only when we realize who we truly are will others stand a chance, I suppose. As it’s said: “How can you love others when you don’t love yourself?” It stands true for any other sentiment too.

“I seem to be the type of artist who recognizes a small field as his or her domain, to be explored in depth and detail. In the drawings made during those twelve years, the main principles remain the same. Changes do not occur in the form of an abrupt break; instead, they appear as gradual shifts, leaving the core intact, like landscapes at the turn of the season.” ~ Juul Kraijer

Juul’s drawings are in charcoal – sometimes with wiping and rubbing that traces the earlier patterns, her earlier drawings are less linear and her isolated forms loom out of emptiness or the black undefined background. Time, space and context remain absent in this landscape of the mind that just stretches far and wide, there is conciseness, lightness and brevity, female body borders on androgynous without explicit details like eyebrows, breasts and pubic hair, expressions are unmoved and reticent; a posture adopted for eternity, her forms are completely self-absorbed as if in a profound sleep or death, bodies are neutral and they mark the domain of the spirit rather than some reality and all that is there is ambiguous. Impermanence is the perpetual cohort or rather a confidante in Juul’s works. Some works also feature swarms and flocks that contours the human forms, and some have the twin form – the play of duality. Japanese, Indian and classical influences and that of Balthus as she herself mentions can be traced in her works.


“I frequently have the feeling that I am no more than a conduit.” ~ Juul Kraijer

The eeriest, however, is her works with creatures. The medusa-like figures, the bugs, scorpion, snakes, owl and chameleon crawling, slithering or standing over, the face with tiny faces on it. The woman with her half-snake hidden face teases our senses. It could be facing our inner fears while baring ourselves to the world for them to see and yet stay aloof, impenetrable. There is a kind of violation in her images that is always endured and accepted. It most certainly raises the question of “Why such disconcerting endurance?” The inner turmoil while maintaining an external inertness is all too evident. The presence of these sinuous creatures seems to accessorise and become an inseparable and inevitable part of the form also indicating the beast within us. Juul’s figures evade gaze as they are in their own realm, pre-occupied, in monotone surroundings mostly black and luminous white. Her mutating figures may speak a thousand tongues and yet be silent, oblivious to our visual investigation. 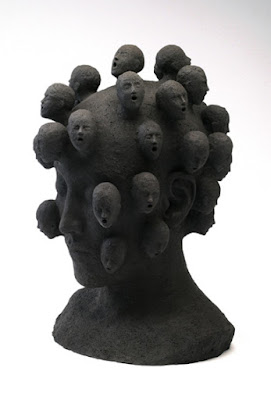 “The world is miraculous without our filter of rationalism, but as soon as you try to express that in words, it immediately turns into mysticism.” ~ Juul Kraijer

In photography, Juul is inspired by Surrealist photography where she can employ alienation, mirroring, fusing of incongruent beings, objectifying body parts and/or casting an incredible snare of shadows. She is also inspired by *fin-de-siècle (end of the century especially nineteenth century) medical photography and Julia Margaret Cameron photography. For some photo shoots, Juul hired animal trainers to supply the reptiles, snakes and owls as they were specially trained to be draped on bodies and not be provoked by the human presence or of the glares of the photo shoots. Her photography like her drawings are concise and share the qualities mentioned earlier. 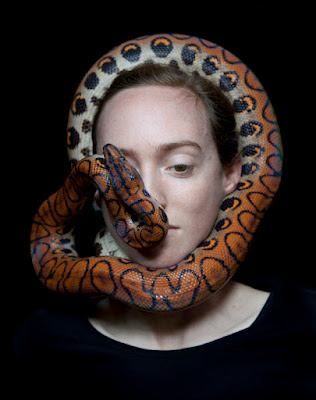 Juul’s figures are more of an abstraction or an apparition than an individual in flesh and bones. They are in a transitional zone somewhere between the transient and the timeless. It could probably be that searing desire to unite with the Universe which of course is unattainable unless one conquers the discord within.

*fin-de-siècle medical photography – In the second half of the nineteenth century the new media of photography and film gave way to a new understanding about mind – psychology and psychiatry. They became the mirrors of the unconscious, capturing the inner state of people who were troubled which paved way for an indulgent understanding of consciousness and sanity.

Happy to announce to my readers that Juul Kraijer has won the 3rd place in the Lensculture Black and White Awards 2018 for this series:

In April there will be an exhibition with works by the winners and finalists at Aperture Gallery in N.Y.C.


This is my second post for "Where Art Happens - Kochi Muziris Biennale 2018 series". The first post can be read HERE.

You can send your feedback to mail.huesnshades@gmail.com

profile pic- www.fondationdfguerlain.com
Ref & Images: http://www.juulkraijer.com/
(I've edited the first and third pictures for the post.)
some info from Lensculture and cttheory.net

Thanks for sharing, very informative.

Ohhh just amazing art. Thank you so much for sharing.

such interesting art ! Thanks for sharing about the artist along with your thoughts too. happy PPF!

Thankks for a great read