The Weight of the Body

When you consider how much you weigh not on the weighing scale but otherwise – emotionally, mentally and in every visceral way possible; the question takes an entirely enigmatic turn than you can't foresee it. There are such instances I have come across when you weigh more than you can turn out to be when you no longer can bear your own weight, when you feel over-powered and burdened by the burgeoning weight of your being. Recently I came across an article in 3:AM Magazine (Thanks to Joseph Schreiber and Mini Menon for introducing me to some incredible writing) titled “The Weight of a Body in a Photograph” by Elisa Taber and that set me into profound thought for I have experienced it in an altered and elusive way myself.

You can read Ms.Taber’s article in the link mentioned to get an idea of what stirred me into this post. The article put me on course reminding me of paintings and/or people whose weight I felt at least for a minuscule of time. But that minute time was intense enough to leave its unflinching mark on me; to which I get back often whenever I think of them. They range from Amrita Sher Gil to T K Padmini, from Sylvia Plath to Virginia Woolf, from Paula Rego to Hopper.

Hunched back frail nude seated on a wooden chair with a hat near her right hand, and framed by a morose and obscure curtained backdrop, gazing into the unknown as if she is no longer present in the room but has been transported into a yearning past. Her melancholic eyes speak manifold. Amrita Sher Gil’s ‘The Professional Model’ doesn’t appear sensuous or vulgar or tantalizing but just a vulnerable lost soul, humane. “There is nothing erotic about this. Only stillness and a nudity that conceals so little she nearly seems dressed.” (Elisa Taber, ‘The Weight of a body in a Photograph’ Elisa was speaking of a different image there and yet it perfectly fits here.) 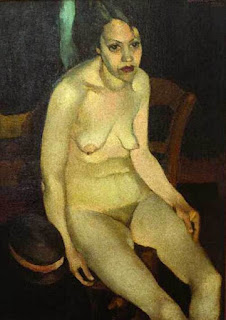 T K Padmini’s embracing couple, for am unsure of the title, though apparently romantically involved weighs more than meets the eye. There is a sense of the pulsating breath, an eternal longing in the gaze and the embrace as if they were meant to be and yet would never be. The apparent omen is deepened by the passionate red. It is definitely a story left unfinished – a fragment, wherein the lovers never ‘lived happily ever after’. It’s more elegiac than a sonnet. If you consider Padmini’s own life, she has been weighed down and forgotten in the lanes and by-lanes of the past than all her contemporary artists who apparently weren’t women. 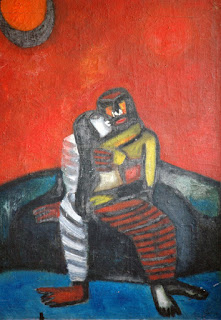 Virginia Woolf’s ‘A Room of One’s Own’, ‘To the Lighthouse’, ‘Mrs. Dalloway’, ‘The Waves’ etc. were part of my Masters’ and I felt distanced from it. They were pretty intense for our understanding or so we felt at the time. We used to think why should the writers write something that shakes up our very existence providing parallel worlds that’s disconcerting, miserable, often times alienating. You enter and you are totally lost and yet you find your way out somehow by the end of it dragging yourself through the labyrinth. But Virginia herself couldn’t and the way she closed on her life by stuffing stones in her coat pocket to ‘facilitate’ herself drown, visualizing that always weighed me down to suffocation. 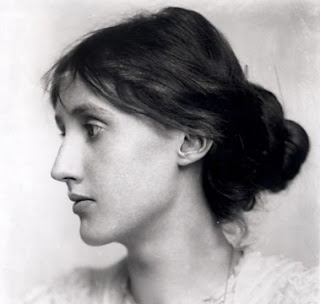 Immediately Sylvia Plath comes to mind, I think of her more often than Virginia though. One of the most talented Confessional poets who should have lived to realize her unparalleled potential. Suffocation from carbon monoxide, her body always weighs down many a soul. It crashes upon the reality of revelations and confessions. No one could help her in spite of it all happening right under their noses. Her 'words' often cried for help. "Placid exterior and turbulent interior" Plath's quote often repeats itself in several situations. 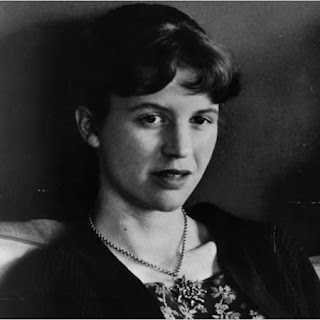 Paula Rego, I feel, prefers ‘bodies’ that are rotund and muscular in frame, not frail, lean and lanky and yet they appear weightless or more than their bearing depending on where they are placed. They are subject to all sorts of cavernous, dark, mysterious and sometimes structured violence. ‘Snow White swallows the poisoned apple’, the ‘Dog Woman’ series, ‘Abortion’ series, ‘Love’, ‘Flood’ and almost every other work of Rego imbues with the harassing weight – drifting, floating, crawling, slithering and/or static. 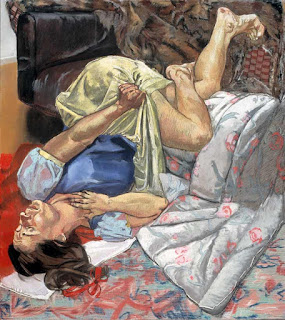 In Edward Hopper’s ‘Summer Interior’ even though the woman’s face is obscured one can read so much emotion curled up in the folds of the sheet and bed and the lady herself. Semi-nude, she sits slouched on the floor dragging the white quilt from the unmade bed. She has a lowered, despondent gaze; entirely absorbed in her thoughts and is unaware of her surroundings. The patch of streaming light from the open window on the right end is the only sign of relief from the otherwise sullen setting. The white of the sheets and her sleeveless shirt adds to the light which otherwise would have engulfed in darkness. There is a craving to let go off everything they are holding onto though that seems immediately impossible because either something is brewing or just ensued. Edward Hopper has not only ‘his people’ but the very structure – whether it’s an old barn, a house by the railroad, a lighthouse, an office, a diner or even a street – weighing down on itself. 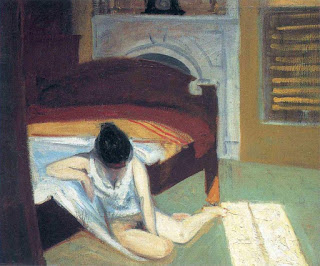 (Though there are still many more in mind, I think I will halt here.)
Whatever the image... ‘those faces’ cease to exist, it is like unmasking and making it apparent. The bodies themselves cease to be and beyond the natural forces in control. You feel both weightless and more in weight depending on where you place yourself both in context and out of context.

A beautiful and romantic post.
The body is a magnificent wonder~
Have a lovely day.

This was an interesting post. I love your descriptions as much as the paintings. Wonderful!

This was so interesting to read and really take a look at these artists. Thank you for sharing Deepa. Happy PPF!

I know so little about all this. Thank you.

(ツ) from Cottage Country Ontario , ON, Canada!

Wonderful, informative post! Thanks for sharing. And Happy PPF

A real collection of words, pictures and history so informative. Thank you for taking the time. Happy PPF Tracey

You feel both weightless and more in weight depending on where you place yourself both in context and out of context: this line is the crux of the post.

Very insightful. . .I appreciate your art and ideas. Blessings, Janet

Very nice post and Art...
It would made may day if you will visit my blog.
iwillrocknow.com