I chanced upon Vaishali Oak and Raju Sutar at one of the exhibition Openings in Gallery 27, Mattancherry two years ago. Vaishali and I connected instantly, and from then on we have met on and off at a couple of exhibitions. Raju had curated a show “Roots/Routes” during Kochi Muziris Biennale 2016. It was one of the best shows and it was part of the Collateral project as well. This year Raju Sutar is back again in Jew Town with “Thought is also a Matter” as part of the Collateral project organized by artexperiments.com. The artists include Vaishali Oak, Sandip Sonawane, Rajesh Kulkarni, Hrishikesh Pawar and Raju Sutar himself.

“How does it (thought) work on our minds and on different levels, conceptual or otherwise; or does the thought go beyond? I think it is important to question/challenge the very idea and go deeper instead of adopting it as it comes to you.” – Raju Sutar (from the Concept Note)

Enormous canvas paintings, huge fabric assemblages, colourful canvas on wooden mounts in basic shapes, languidly floating terracotta ‘matters’ in steel wires and culturally-transmuted performative pieces are not what you expect when you hear the title “Thought is also a matter.” Time and thought go hand in hand. Not a moment passes without a thought as we, humans, as are so cluttered with thoughts. While the sages had enlightened thoughts, we normal mortals have chaotic ones. It’s an exploration into this day-to-day seemingly mundane and unconscious process which is made exciting, colourful, humungous, surreal, performative and gestural in “Thought is also a matter.” Each artist reflects on the effect of thought in their lives and brings out their exclusive perspective. 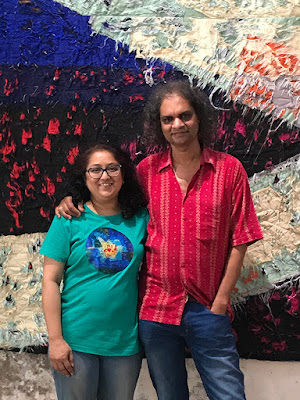 
Entire Existence is a Thought Except Now – Raju Sutar

Raju Sutar explores the concept of ‘NOW’ and what this ‘now’ can offer. It’s an interlude between past and future. What is now will become past in a moment and it shapes the future as well. So 'Now' is crucial. He has made seven enormous 12’x42’ canvas with ‘action paintings’ as Raju calls it as his focus was just on actions of the now and not on the movement. The movement would have needed more organized thought and he was just living the now, capturing the fleeting thought by thought. There is also an animation that captures the movement of his action paintings like scribbles that web out of a plain surface projected onto the wall. 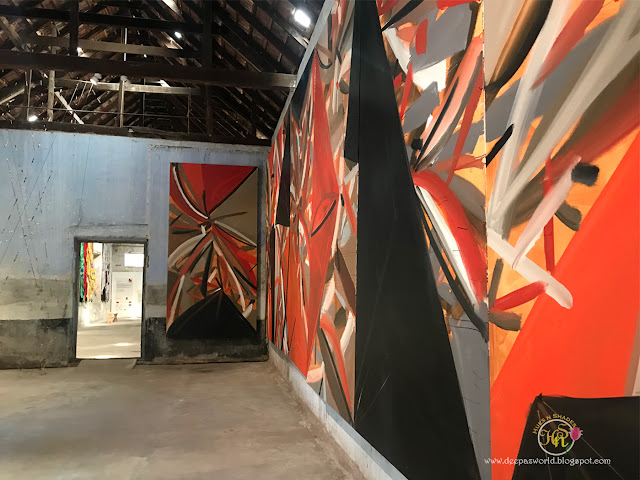 An age-old thought revisited. A seed has always been associated with life and propagation of life and ideas. To Vaishali thought is a seed that when sown at the appropriate time sprouts into a sapling, which when nourished and nurtured would grow into healthy 'beings' providing food, shade and shelter. All life processes begin from that seed and ends in the seed. Follow its journey and you can journey along into the depths of your being. Vaishali’s fabric assemblages are intensely colourful drawing our eye and prompting it to move from one end to the other and back again. You could see the layered fabrics, the tear, the threads, the peeping warp, the in-between muted tones and you see the evolution of her thought. She has a black seed installation hanging from the roof ready to burst to life. Vaishali has even devised a Seed Postcard embedded with seeds that are available at the counter which can then be sent to your loved ones who can sow these cards and there you go with a ‘life’ sprouting from within.

“There is a great significance in the evolution of civilization. We are the products of what has been sown yesterday and this process will go on. When we dream of a brighter future we have to sow seeds ‘now’. ...Just as the way seeds travel and propagate, our thoughts do travel and propagate in our minds.” ~ Vaishali Oak 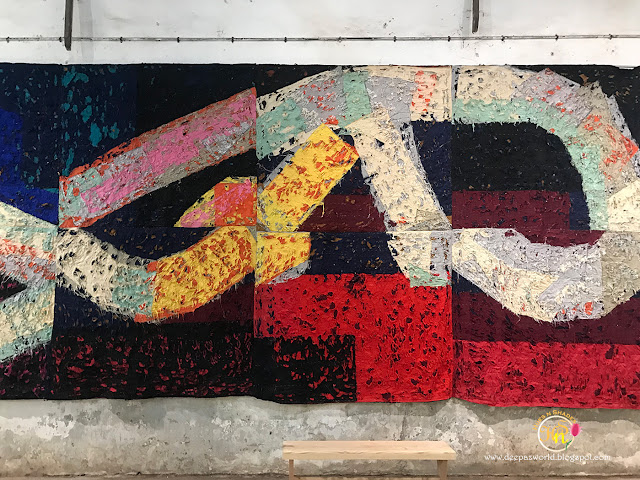 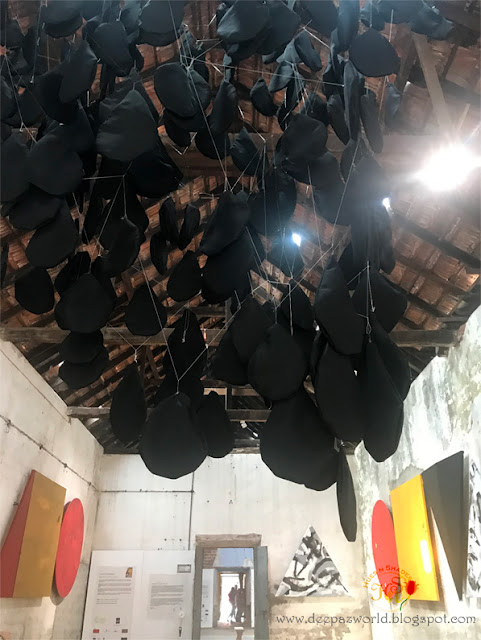 Breaking it Down to the Basics – Sandip Sonawane

According to Sandip Sonawane, we break down a complex image into simple shapes in the initial process of drawing for a better rendition of the image, for a proper grasp of the proportion and details. Whether it’s a circle, a triangle, a square etc. they are but the joining of lines to form an object/shape. So any complex picture can be broken down into basic shapes and can be seen en-route formation. They are also the boundaries that project an exterior and an interior; the field within and without. At first glance from a distance one could see monotones of shapes – circles, squares and triangles – in red, yellow, black etc. but as you near you could easily discern the layers of paint beneath; a camouflage of thoughts in 6’x6’.

“The idea is to break down the thoughts in a similar way. The thoughts are complex in nature we try to break them down to make sense. Whether it makes sense or not.” ~Sandip Sonawane 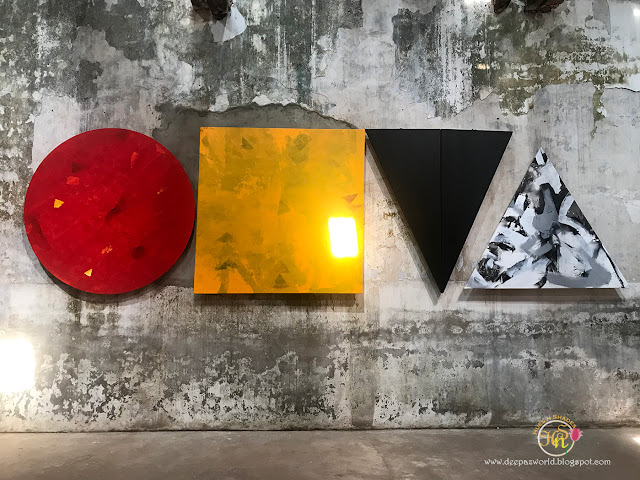 A Thought about a ‘Thought’ – Rajesh Kulkarni

Rajesh Kulkarni’s take on ‘thought’ is much more dreamlike and esoteric. Thoughts are like particles that hang around and once it steps into the past it immediately transforms that energy into enigmatic, abstract and clustered forms. Rajesh’s “Thought” is 15’x45’x28’ where beautifully sculpted terracotta forms float indolently in space through thin steel wires at the slightest breeze. One can even walk around it absorbing the sight of those gleaming earthy forms as the sun hits the roof, seeps through the pores of the warehouse and falls on its ‘raw skin’.

“When I thought about a ‘thought’ I thought that the thought that travels with speed, that has fickleness of present and at the same time, there is a sense of strong flowing reality. Present that annihilates the moment it creates itself. There is a grasp of multi-faceted analysis of the moment and amalgamation of mixed illusions co-existing.” ~ Rajesh Kulkarni 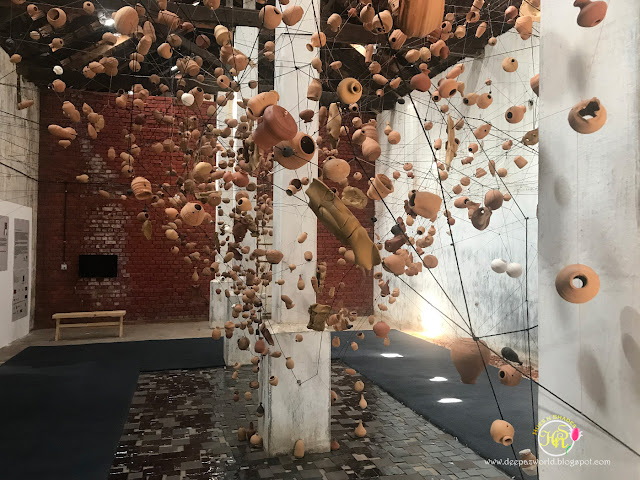 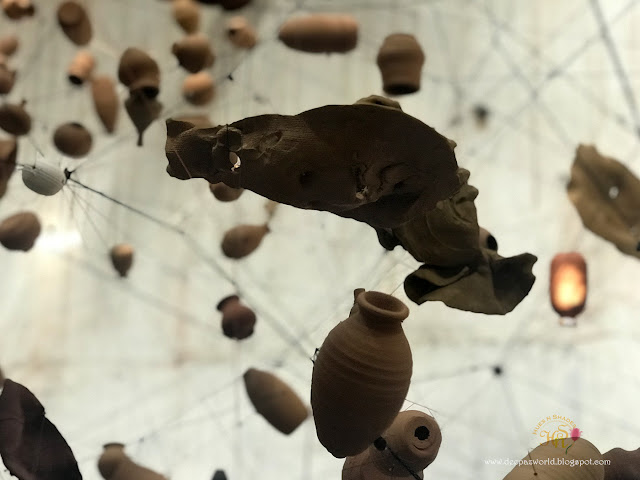 Hrishikesh Pawar's pertinent question here is where do thoughts originate and where does it end? It plays with time and space; a space with characters performing postures and gestures that have been imbibed, altered and metamorphosed not from any single individual or the performers themselves but from a “library of personalities” or “a pile of flesh, living a metaphor of turmoil and conflict of the surroundings affecting the present “Thought.” “ This performance is the melting pot; a layered deconstruction of various traditional dance/performative forms from Maharashtra and Kerala. With the help of 4 assistant choreographers, 25 dancers, they are to perform 48 shows by the end of the Biennale. The performance dates can be sought after at the exhibition venue. I am yet to see the performance albeit I did see their video in the gallery.

“A weaving of story-telling between the performer and the audience with abstract rhythmic poetry of sounds, gestures and forms. The performance is a first draft of re-imagining the physical aesthetic of the body and its thought which creates matter.” ~ Hrishikesh Pawar 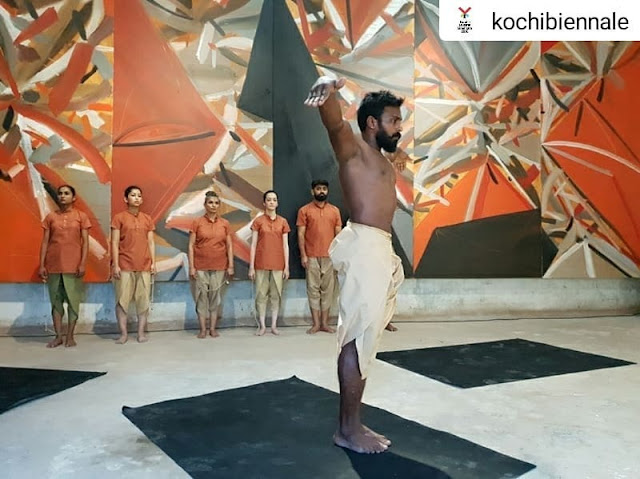 Awesome. I loved the "Thought". Hats off to the artist.

Wow, wow and wow! So incredibly captivating all the art works and reading all the thoughts of the artists on their works is inspiring. "Entire Existence is a Thought Except Now" - I am digging through all your KMB posts right now :) hopefully one day I will have the honor of meeting you and some of the other wonderful artists in person, till then, here I am, glued, admiring and appreciating virtually. More power to all of you!

We saw your content and found it interesting.
We at Art Culture Festival are looking for representatives, contributors, bloggers, artists, etc. to represent us in your city. Art Culture Festival
is a digital platform based in Delhi, India. Through the website we
provide a multi-dimensional platform that uses a holistic approach to showcase art in all its forms under its ambit.
We are art and culture aggregators who like to explore the realms of creativity and celebrate form and traditions. If you found us and our work intriguing, please reach out to us at www.artculturefestival.in