Embracing the DISTANT and the PERSONAL - a review


Distance is just a test of how far love can travel. – Unknown (and if I may add that is what makes it personal.)

When four creatives meet through art it’s a journey through the distance to the depth of each one’s soul to invoke what is personal and to grip the experience of belonging. It’s a matter of travelling both inward and outward, alike. Whether we wander in search of exotic locations and/or the mundane to capture what we perceive or whether we delve deep within and stir up an ocean of possibilities; it is at once distant and personal. Distance measures love; yes, love that which meets at every milestone and checks the parameters and squints to see where one has reached under the scorching daylight or the pelting rain tantrums and the most important question is - “Is there something for me to love here? Or maybe someone/something to love me back?” Each one undertakes a journey of one’s own and that’s not a choice. It’s a necessity, devoid of one’s control. One simply can’t choose inertia.

Besides, we are four individuals on our very personal creative journey with four varied mediums, techniques, themes and personalities that are quite distant and yet holding it to our bosom. There were 74 works in this exhibition. Our exhibition was inaugurated by the eminent Poet-Illustrator, Sri. Paul Kallanode. 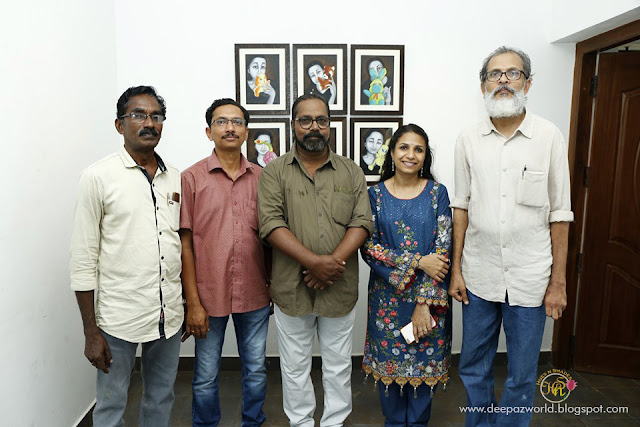 Following in the alphabetical order, my i.e. Deepa Gopal’s protagonists enjoy detachment, solitude but they are rarely lonely. They are in a realm of their own, creating parallel worlds. My interest attempts to capture the burgeoning cosmos on one end to the deepest ocean depths on the other and everything in between and yet that which captivates me the most is perhaps the limitless mind in general and the inner workings of the feminine in particular. Myths, dreams, people and their tales, the emotions and the unbridled feelings kindle my creative juices. They are at once distant and yet personal. I like to couple some of my works with my own Haiku (Japanese poetic style) for the title. Acrylic and gouache with a hint of pen and inktense pencils were the mediums used there. The 35 works I displayed were a mix of series that I had been working on for the past couple of months. Along with the Solo girls (13 works) which were both referenced from my daughter and self, I also had my "Saga of the Nagas" (5 works) based on the myth and legends of the Sarppakkavu or the Sacred Snake Groves, Nocturne series (9 works) and landscapes (8 works) of places in and around Palakkad/Kerala. 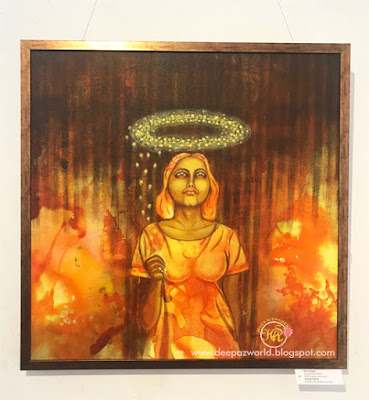 Even in meditation, Devan Madangarly’s protagonists who happen to be teenage boys travel. They do not take a literal road trip though. They move to the core, the center, the essence of their being to invoke where they belong. They kindle doubts; doubts about dhyana (profound meditation) in an attempt to reveal themselves through their personal experiences. His protagonists are always solitary figures. The presence of waterbodies suggests continuum – even when it is static or flowing. Life and death is the main subject in his recent works and he uses the presence of a solitary crow in various stances that attributes to its symbolic representation. It was interesting to note a personal story about a crow that used to visit his ancestral home for a couple of years and would take biscuits only from his mother which it then went on to eat by dipping it in water, piece by piece. Watercolour (10 works), pen and ink (7 works), graphite (5 works) are some of the mediums he has used. There were 22 works of his in the exhibition. 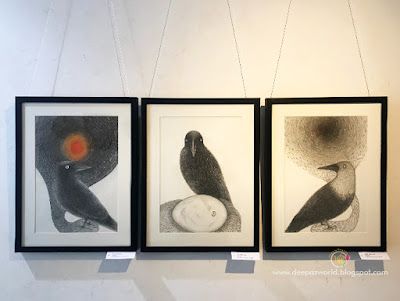 Devidas Varma colours his wide canvas with the hues of nature seizing the epitome of beauty that nature is and his surroundings are. His journey is to apprehend and encapsulate the past glory of our Motherland while focussing on the magnificence and splendour of Palakkad to be specific. He takes on the role of a detached and distant observer who conceives and employs a personal narrative to a landscape; a setting that is inviting and open to all. The land, the green, the earth has more impact on him than anything else. It was a treat to watch his Attapadi works zooming in from a distance to a single house in three canvas. The viewers were taken back in time to an era before it had made technological advancement, before electricity. He has captured the essence of a bygone era of different factions of the society so well that it is definitely a treasure for future generations to study the lifestyle, architecture, the land and its layout etc.  All his 15 works were in acrylic. 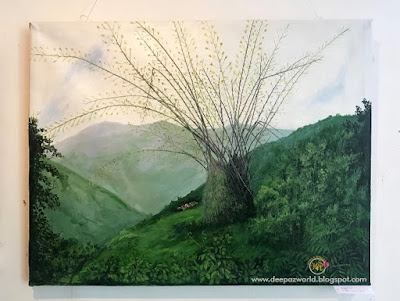 Joby Ravindran travels far and wide into his past and his surroundings whether that’s real and/or imaginary – into his childhood, history and dreams, etc. He is inspired by different things and themes and it’s his subject matter that determines the use of his medium which varies from watercolour and acrylic to gouache, charcoal and soft pastels. His recent works are inspired by his immediate surroundings as he is lucky enough to ogle the groovy landscape of coconuts where they mend and blend with the folks of the place like the fronds that synthesis into the braided hair of the women. There’s emotion at play when his women are often meditative and reflective, when he ventures into modes of relaxation through the odd windows peering into their ordinary lives and when he walks the quiet and distraught lanes of Bidding Street. There's a raw and rustic feel to his works which seems to emanate folklore of sorts. 12 works in charcoal and soft pastels were exhibited in the show. 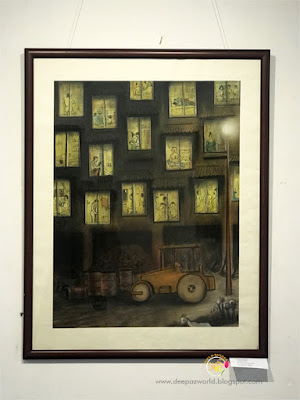 Let them relax - Joby Ravindran
from DISTANT and PERSONAL


A note about the audience:

All four of us were unanimous in our choice of Kozhikode for our exhibition. We wanted to try a new city and most importantly we wanted to experience the aesthetic hospitality that Kozhikode was so famous for. We were definitely not let down and they truly fulfilled their part of being the wonderful-kind-of-host. Each and every person who entered the Akademi had something to offer. They were not in a rush, they slowly approached each work, spent a handful of time observing, gathering, acknowledging, even rummaging at times, having conversations with us, interacting and finally leaving a mark of their own on our minds. It includes the Akademi staff as well.
Thanks to the City! Gratitude!

Thanks to the fabulous media - print, visual and audio for supporting us and loving us the way you did. Again, Gratitude! 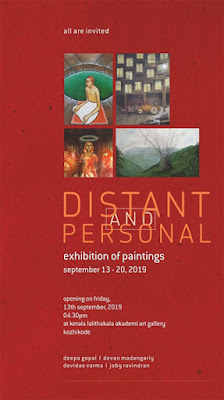 Poster of DISTANT and PERSONAL

Please Note:
In case anyone is interested in purchasing the works, please email at mail.huesnshades@gmail.com for the catalogue and the price.

Quite an artistic treat to go through this post.