...between the eye and the brain - Cecily Brown

“I want to make forms that are either just dissolving or in the process of just becoming something and to play with the relationship between the eye and the brain.”

From time to time I go through works of many women artists, I don’t do that intentionally but they catch my eye more than their male contemporaries. I think there’s so much more happening in the canvas with all the told and untold stories that may or may not relate but for the most part, it’s the former that happens where ever they come from. I think there’s an invisible thread, a link that runs through the lives of the likes of us that coincide at some point. There lies a universal phenomenon beneath each surface.

Cecily Brown was born in London in 1969. A graduate from the Slade School of Fine Art, Brown moved to New York from London in 1999. She was just 29 when she made it enormous in the International Art scene; the Allbright-Knox, the Tate, the Whitney Museum, the Rubell Collection, the Broad Museum all made major acquisitions of Brown’s earlier works, certainly an incredible achievement for a young artist of her time. She is already in the echelons of the expensive female artists in the world. 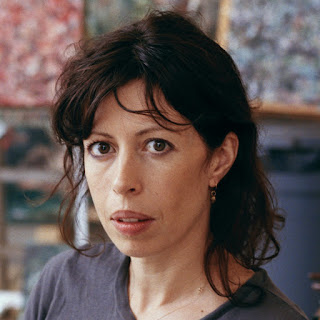 Brown addresses herself as a figurative painter. As a child, she used to sneak into painting books of Francis Bacon and George Grosz, the German painter (known for his Butcher Shop paintings) and she liked the horror and scariness that it imparted more than anything else. Brown needs a body as a vehicle to talk about being alive and to understand the world else she feels that there remains nothing but smears of paint. She feels concerned with completed figures and finds the need to break it down. The cacophony of glaring, grimacing and fragmented figures as subjects, some evident, some loosely drawn and some hidden, all the same unmistakeably figurative like some elusive short-hand Brown’s adept at, reduced to complexions and sometimes veiled expressions and a whole kaleidoscope of fleshy pinks, oranges, browns, purples and grey fill up her canvas. There’s a tug and pull of painterly effect and figurative content amid the brimming human presence. Her aesthetic is characterized by sexual imagery and abstract expressionistic gestural style.

Brown likes it when nothing’s pinned down or determined, to be in a state of flux, in the process of becoming which I think is quite a wonderful place to be just as we might say that the journey is much more enjoyable than reaching the destination. She’s not into pure abstraction like later Rothko or Barnett Newman as she herself mentions. She conjures up images and is influenced by Masters like Rubens, Poussin, Goya, Titian, Degas, Miro, Gorky, Joan Mitchell and William de Kooning, the abstract expressionist. Brown takes in from history paintings and places it in her own aura of the canvas where she strips them of their past and breathes into them a new lease of life unconnected to where they belonged. The Young Spartans Exercising and La Coiffure (Combing the Hair) of Degas influenced Brown immensely particularly with the fleshy tones and figures in the former and the inherent menace in the latter which were brought to her notice by Bacon, she mentions. 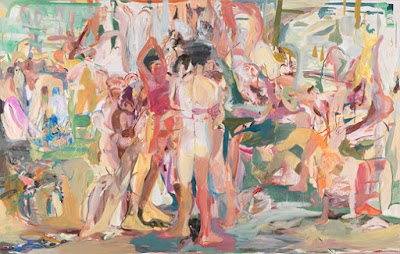 Borrowing the names of classic novels, plays, and Hollywood films such as The Fugitive Kind, The Bedtime Story, Those are pearls that were his eyes, High Society, or The Pajama Game, she utilizes it to her best and makes her titles quite fascinating.

Sexuality, eroticism and attraction are important themes in her works which Brown explores through the churning of embracing couples pressing against one another forming and dissolving into a gorgeous watery landscape, the palette is luscious and fleshy, the subject is romantic and athletic in execution but refined all the same. Figures in a Landscape 1 and Figures in a landscape 2 are sister-paintings both in prestigious collections. These were two of the exceptionally famous works that fetched her an incredible sum to begin with. 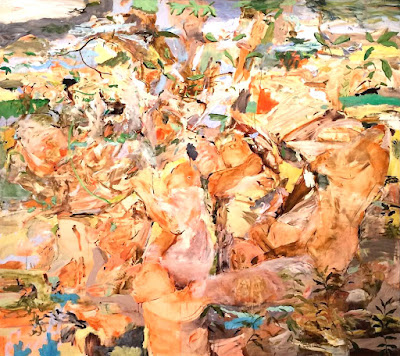 Figures in a Landscape 1

Cecily Brown’s Bunny painting reminds me of Paula Rego’s earlier bunny paintings as well and Rego happens to be one of my favourites. What I find appealing in Brown’s canvases are the fleshy tones and the painterly texture that extends all through her wide canvas. Her story-telling has a signature style which she instills from a series of source images that are laid out in her studio and she works from them without directly holding, looking and drawing from it as she has become an adept after years of working from images, some are repeated too.

Where, when, how often and with whom? is a 30-foot-long triptych (donated to Louisiana Museum of Modern Art) The 2 central figures appear like apparitions, veiled as their eyes are washed off. They remind Adam and Eve’s expulsion.  Another aspect that appears in the same work is the shipwreck as in Delacroix and Gericault. Brown speaks of the impending violence when the French cops surrounded a lady in *burkini and asked her to remove the excessive clothing on a beach in Nice a couple of years ago which happened to catch the news. She speaks of the viewers who appear to be complicit voyeurs on the beach. I agree when Ms. Brown mentions that even in this century women are told how they can and cannot appear at a particular place say here a beach. Voyeuristic viewing appears as the subject in her painting; there’s always a voyeur there. She likes to respond to the things that she has seen. It just happens to point that how violent our society is, there’s always an underlying menace. She likes to think of herself being the intermediary feeding off the past and giving it to the future. Horror and sweetness are the constants in her canvas and of course some drama.

Where, when, how often and with whom?

One needs to be physical and performative at a bigger scale like Brown’s. They are incredibly ambitious and fill up entire walls.

The ones I admire more are of a darker nature along with the above mentioned like All the nightmares came today and Black Painting 1. I like the ominous quality to it. 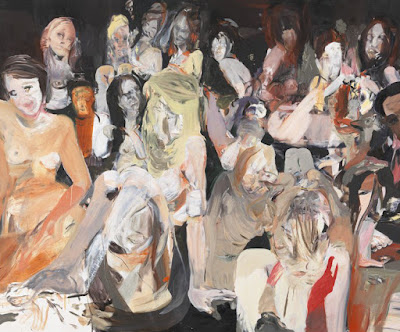 All the nightmares came today

Amidst all the cacophony nowadays people wear headphones and weave in and out not realizing that they are going to bump in on someone at the last instant. They are totally unaware. They are so engrossed in the gadgets. The phone has brought about the death of society in a way. The figures in the paintings are unaware of the other though they are in the same physical space but they are not connected. This disconnectedness in today’s society is the tipping point.

Agreeing on those terms, I feel we are totally engrossed in our petite compartments that we are no longer bothered about what’s happening at the larger picture. If only we took some time to pause and look around, we would notice where we are heading.

*Burkini - a portmanteau of burqa and bikini - a woman's swimsuit that covers the entire body, leaving only the hands, feet, and face exposed. A type of modesty swimsuit for women.

Fascinating read and art. Thank you.

Thank you, Deepakji! Cecily Brown is a fascinating artist.

Thank you, Sonia! Cecily Brown’s works are amazing and interesting with layers upon layers of intriguing stories!😊