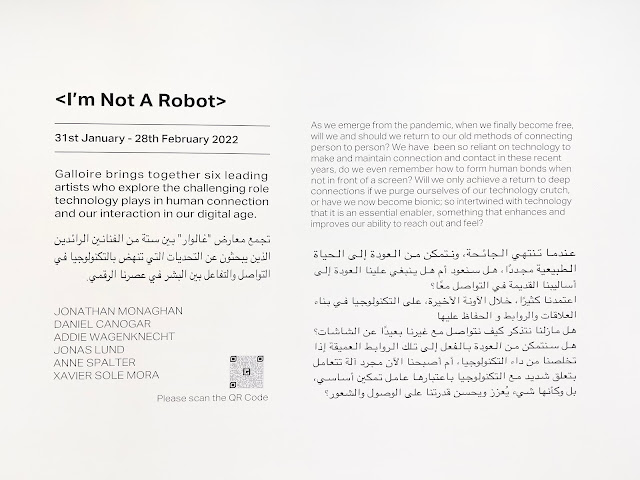 At a time like the present when we are badly hit by the pandemic and when physical communication has been curbed, where our life is lived through digital screens, reminding us of the impact of technology and the reliance on it 24x7, this exhibition raises pertinent questions and becomes more prominent. Technology is advancing at such a pace that there’s no discerning as to where it will take us. It is not only forecasting but also generating and establishing a future.
<I am not a Robot> will run until 28 Feb 2022 at Galloire Art Gallery, London Street, City Walk, Dubai. You can also view the works via the gallery’s website https://www.galloire.com/
It is always better to see such exhibitions in person. Do visit the gallery and experience the show. Addie Wagenknecht and Daniel Canogar happen to be my personal favourites. Who are yours?
Thanks to Slava Noor and Edward Gallagher for the invite.
*Anthropometry paintings are paintings where Yves Klein dipped nude women in his patented International Klein Blue paint in front of an invited audience along while the musicians played Klein’s Monotone Symphony – a single note played for twenty minutes followed by twenty minutes of silence.

what a lovely collection

@Sujatha, It was an Amazing collection! To see it in person was an incredible experience!