Varanasi (Benaras or Kashi) is a land glorified by myths and legends and the old world charm where you find mystics, sanyasis, tourists and the normal folk alike. It's one of the oldest and a huge pilgrim-inviting cities in India. It is a labyrinth of fragrant incense-filled lanes and bylanes, high-banks and shrines, golden shimmering Ganges and sun-bathed ghats with the scattered cows and devout mass. It is the land of  exotic benaras silk and brocades and highly famed pans. A land of renowned arena of music, arts and academics. A land I have never been to but wish to attend the incredibly scintillating and soul-stirring Ganga arti at the Dashashwamedh Ghat. The very sight of the Tuesday arti in the television itself had sent goose-bumps...demystifying the divine!

For me Varanasi is one destination I need to visit at least once in my lifetime. Varanasi also called Kashi and there was always this notion among the Hindus about the elderly going to Kashi and never coming back. People used to say now "it's my time to go to Kashi" which meant that we were never going to see them again. In Tamil Brahmin marriages, there's even a ritual based on this notion.

Why am I giving such a build-up!!!

My SOC piece is based on the Varanasi Ghats. Varanasi has around 100 ghats and the one I have tried to portray is the Dashashwamedh Ghat.

The color prompt for this week is: 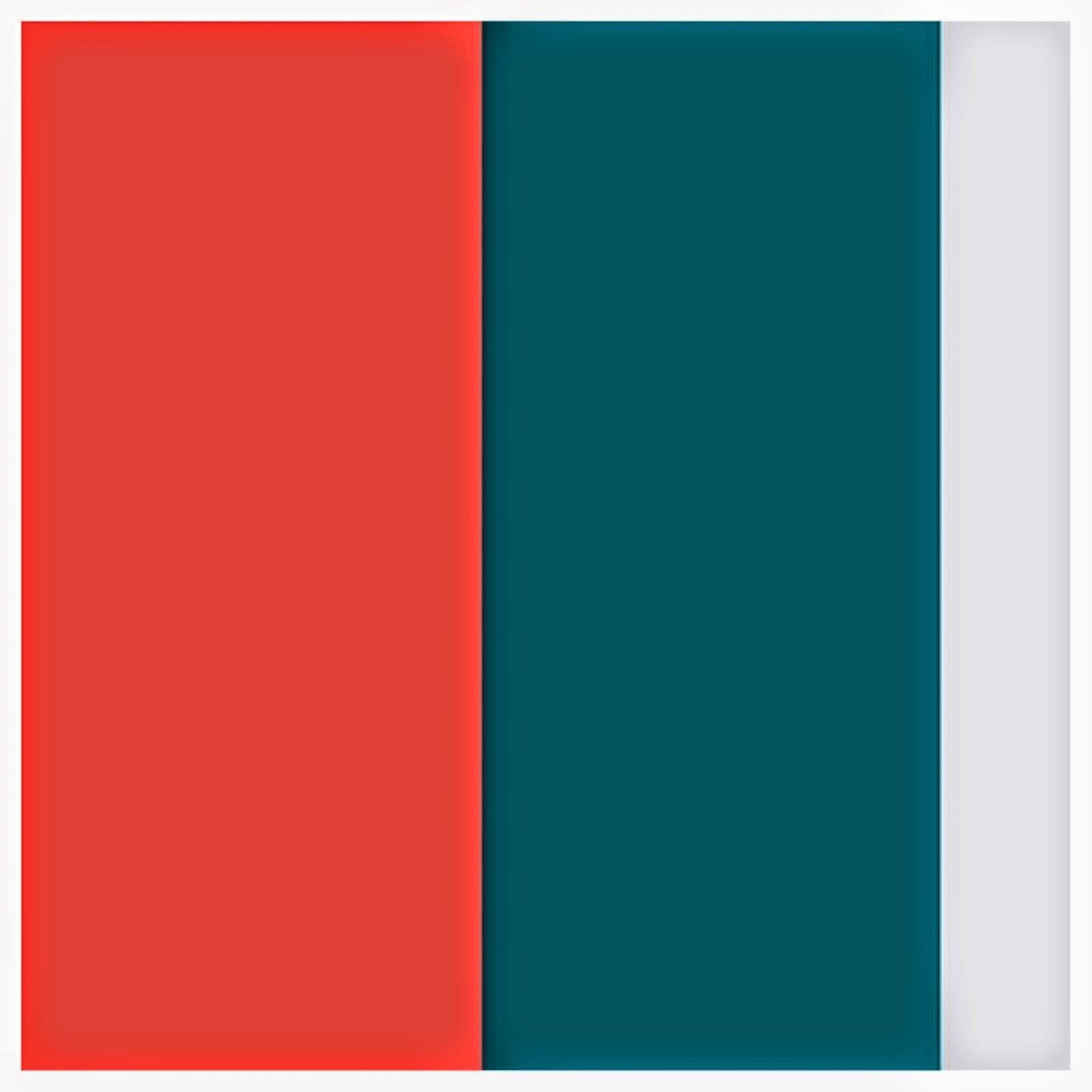 Dashashwamedh Ghat is located close to Vishwanath Temple, and is probably the most spectacular ghat. Two Hindu mythologies are associated with it: According to one, Lord Brahma created it to welcome Lord Shiva. According to another, Lord Brahma sacrificed ten horses in a yajna here. A group of priests daily perform in the evening at this ghat "Agni Pooja" (Worship to Fire) wherein a dedication is made to Lord Shiva, River Ganges, Surya (Sun), Agni (Fire), and the whole universe. 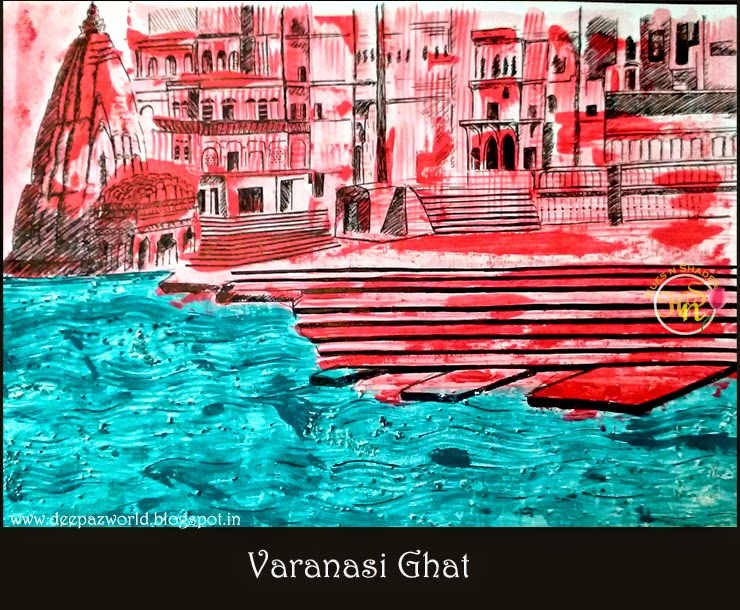 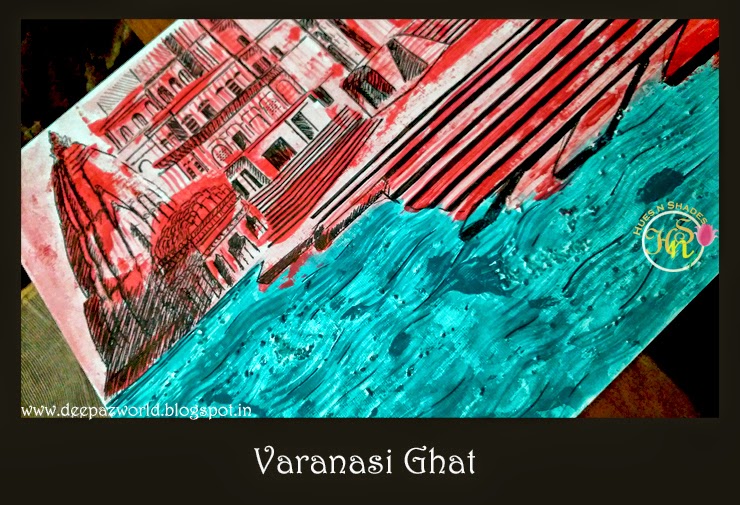 Anyone interested in owning it can drop me a mail at mail.huesnshades@gmail.com

Linking it to PPF and SOC :)
Thanks Eva & Kristin!
Thanks Kristin of Twinkle, Twinkle!

By the way I have decided on 'Temple Saga' for my SOC Art :D

PS: THANK YOU EACH AND EVERYONE FOR STOPPING BY AND TAKING TIME  TO LEAVE THEIR WONDERFUL COMMENTS. IT'S BEEN A PLEASURE READING THEM. ALSO THANKING THE NEW FOLLOWERS FOR JOINING ME IN MY ARTISTIC JOURNEY...

wow I love this! You did a fantastic job on it!

Brilliant creation, Deepa, I hope you get to visit Varanasi sometime very soon, can't wait to see the city live in your artworks someday! :)

Love your artwork, so talented.

enjoyed the introduction, the acrylics and clicked on 'paper boats' to revisit and truly fell for that one

This is a very beautiful painting, and thank you for the explanations. It is always so interesting to learn more about other cultures and religions. Hugs, Valerie

What an amazing painting and introduction to Varansi Ghat. Your work is very rich and lovely too behold. Thanks for sharing it and the story behind it.

You've done a beautiful job with those two colors.

This is a stunning piece, and I appreciated the back story. I recently created an altered book on Asia, and I was in awe of the Ghats. Of course, I have seen nothing as elegant and lovely as your beautiful SOC entry this week. Stunning doesn't begin to say it all, but it's all I have!

ooohhhhh this is beautiful!!! bold and beautiful!
Nicole/Beadwright

what a fabulous take on the colour prompt... the lines are beautifully expressive...xx

This is a lovely picture. Hats off.

beautifullll .. thank you for sharing ..

This is a stunning piece!

Hi Deepa. Hope you are doing well. Wow it seems years since we have known each other and so it is because we go back to the days of Renee, dear Renee. Hope all is okay. Wow, that is some painting and I really love what you did with the colors. Excellent work. Is your daughter still painting? Take care. Good to see you.

This is absolutely amazing and so beautiful. I loved reading your blog post and seeing your wonderful work! WOW!!!!!

Informative and illustrated beautifully. I love your use of material.Glass bead gel Is a favourite medium of mine .

Beautiful colors here and I liked the textures! Varanasi is a place I want to go to so much!

Oh wow this is really amazing!! I love it!

this looks awesome and I am in love with the yummy texture and those gorgeous colors together! Thank you for beeing part of Mix It Monthly ♥ Conny

Such a striking piece...love the colour combo! Beautiful!