It was the time when the youngest, Mr.Vipin Viswanath, who carried forward the tradition had gone to China as the sole representative of India to participate in the 4th International Folk Festival when I had gone to interview the family. He was invited by the Chinese Government to conduct seminars, workshops and demonstrations. Though engineering was the area that he wished to gather his knowledge, unlike the usual families, his' wanted him to pursue something else that would help him to carry forward their traditional art too and that’s how he completed his M.A and is currently pursuing M.S.W. Their daughter, Vijitha, now married is also a torch-bearer of the tradition lives in Dubai with her husband.

Tholpavakoothu (Shadow Puppet play) has been in the family for the past 15 generations and according to Mr. Viswanatha Pulavar – who heads and runs the show, a Post-Master by profession, they know the past six generations by name. His brother - Mr. Lakshmanan and wife - Mrs. Pushpalatha, also helps him in running the traditional art. One of his father’s disciple and the now Guru was also present during this informal meet, Mr. Ramachandran, who is now 77 yrs old and the oldest of the Tholpavakoothu tradition. He had been in this art since he was 22 yrs old. 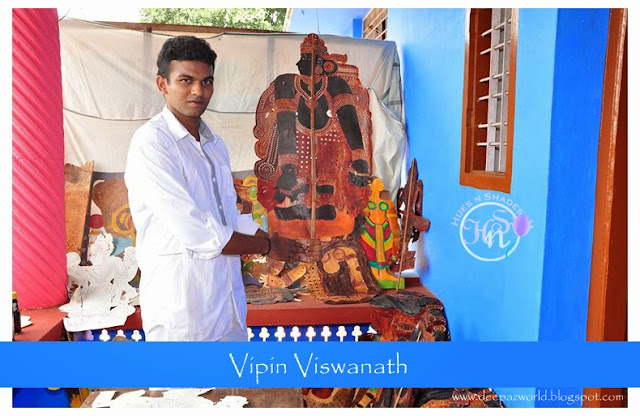 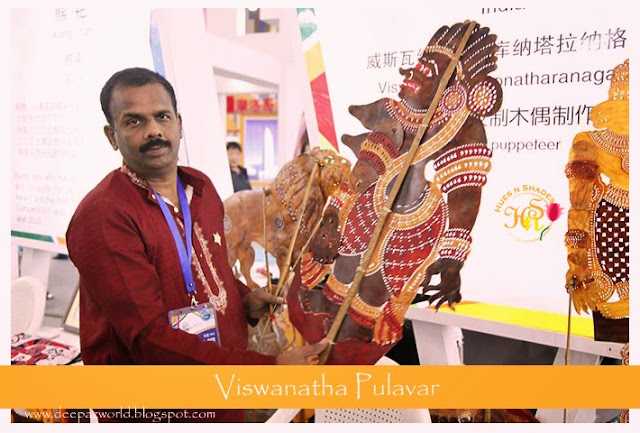 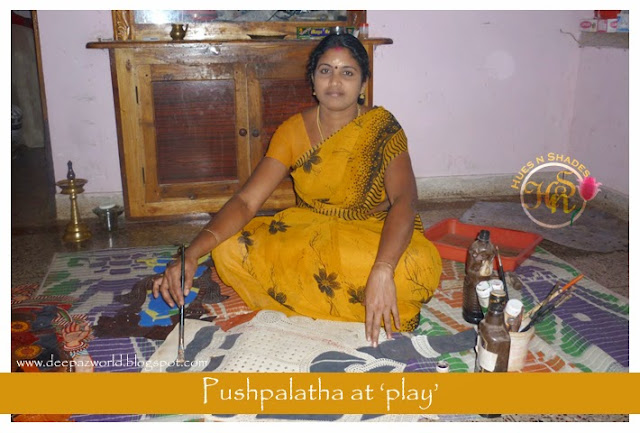 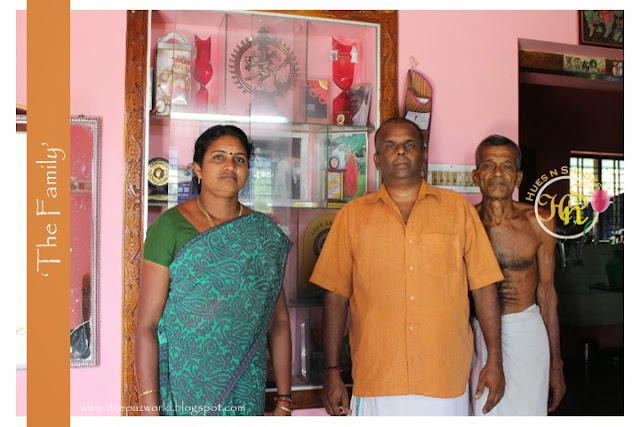 The story goes that when Bhadrakali defeated the asura (demon) Dharika in the Celestial world, Lord Rama defeated the ten-headed Lankasura, Ravana upon earth. Lord Shiva spoke of the fearsome battle that took place on earth when Bhadrakali reached Lord Shiva with the head of the vanquished Dharika. When she heard of this grand conquest she came upon a great urge to see the battle. Lord Shiva asked to seat herself in Kerala, the blessed land, where her devotees will perform this battle as a shadow puppet play each year and thus witness this enticing epic. The Goddess accepted the advice and has been watching this magnificent episode every year. Tholpavakoothu – The Where and How

The art is said to be 2000 years old and is traditionally performed for 7,14,21,41 or 72 days at temples dedicated to Bhadrakali. A performance would normally begin at 10 pm and would go on till 6 am. A traditional art of Kerala, Tholpavakoothu portrays the tales of a mythical age and the superlative battle where the good won over the evil.

Traditionally Tholpavakoothu is performed in Temple stages (The screen that displays the shadow is usually 42 feet and the back is lit by 21 lamps made of coconut halves. The play begins by breaking 11 coconuts each day. One person holds one puppet and there would be around 10 -15 people apart from the musicians. The accompaniment is by percussion instruments like chenda, madhalam, elathalam (kind of cymbals), ezhupara and the wind instruments like the conch and the short pipe called the kurumkuzhal. Chilanga (anklet) is the most important piece of the ensemble. 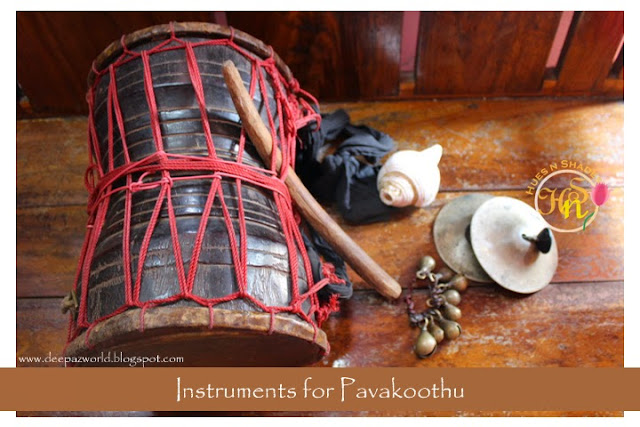 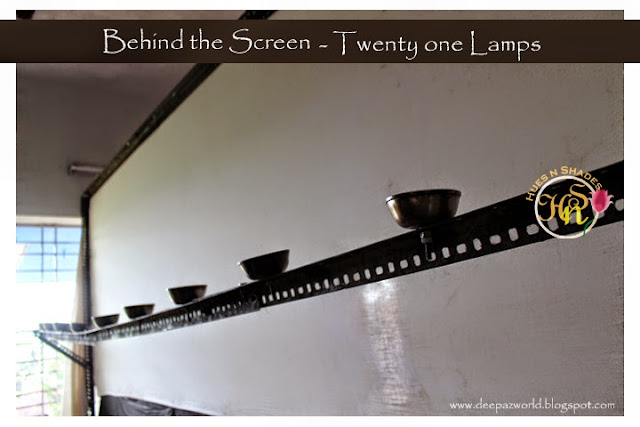 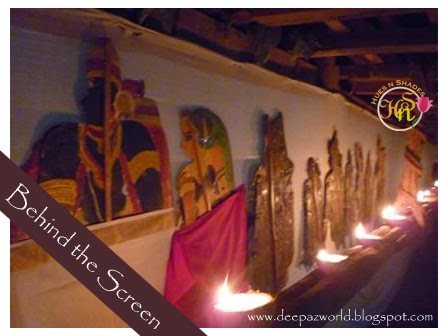 The puppets that cast the shadows move across the screen illustrating the tale in all it’s grandeur and majesty. Behind the white curtain which represents the sky and the black or red curtain which represents the earth, the puppeteers move their characters to the recital of the Tamil poet Kamba’s version of the Ramayana. The language used is a mix of Tamil, Sanskrit and Malayalam. It is usually in the form of questions and answers.

Tholpavakoothu is now available in an abbreviated form where the whole epic is condensed to a short episode that showcases the technique in a span of an hour or thirty minutes without losing its essence. The shorter version was first introduced by Late K L Krishnankutty Pulavar, father of Viswanatha Pulavar. He had received the National award twice in his lifetime. Viswanatha Pulavar has received Grants and Fellowship (Junior and Senior) from the Ministry of Culture.

The team has staged over 5000 performances in India and abroad. They have expanded their repertoire by including tales from the other Puranas like SriKrishnapuranam, Prahaladacharitham and Panchatantra. They have also made unique performances like the life of a Jain saint, Lanka Lakshmi with the NSD (National School of Drama) and the most recent Shyama Madhavam directed by Jisha Palakkad, based on Prabha Varma’s award-winning work, with the backdrop of Tholpavakoothu which has been described as a fascinating and magical experience for the viewers. 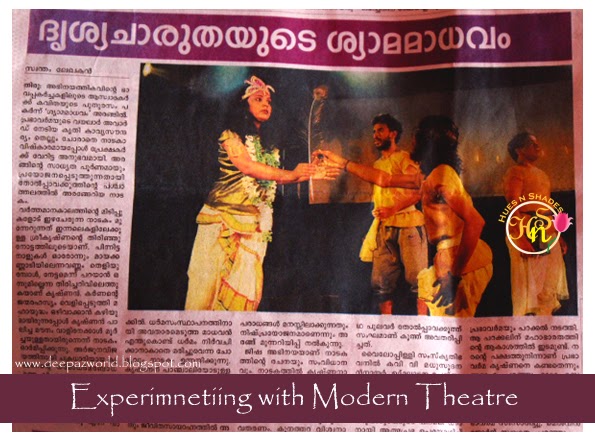 The puppets are colored with natural dyes and sometimes with even acrylics for brighter colours when they need to be taken abroad for several performances. The natural colours also are said to have medicinal properties. The intricate designs are made with specific iron tools that serve the purpose. Extremely detailed and intricate patterns are carved out efficiently. It is these holes that give the magnificent effect when the light passes through it; their beauty is enhanced being behind the lamp-lit screen. 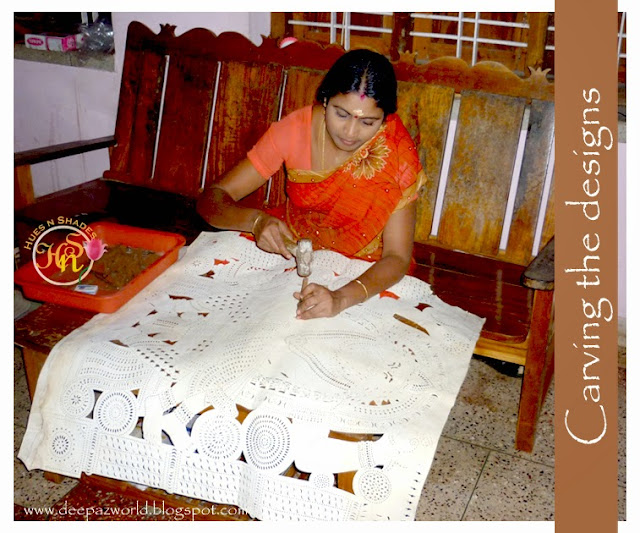 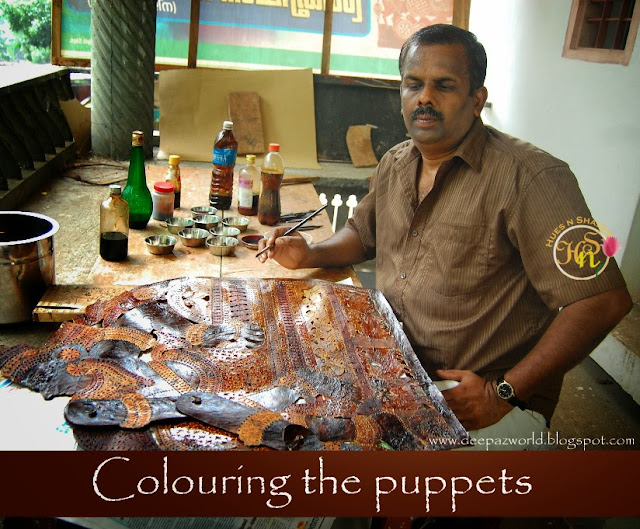 There are puppets to represent 71 characters in 4 main categories - Sitting, Standing, Walking and Fighting. Besides these puppets, forms to depict scenes from nature, battles and ceremonial processions are also used. The puppets all have one movable arm and hand and some have other movable parts.

They have small as well as big puppets which take from one day to one month to create depending on the design involved. I even had the fortune of running my hands (fondly) on an 800 year old puppet and I literally had goosebumps!!! Imagine the centuries-stored tales that it would have to tell !!!! 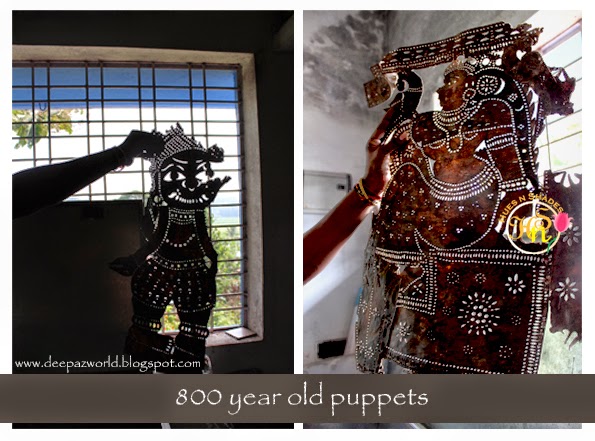 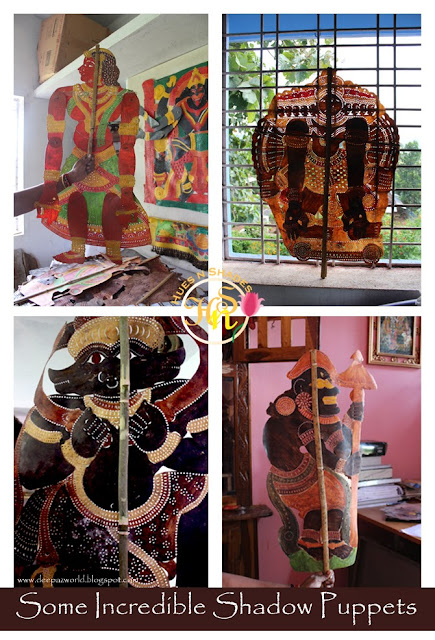 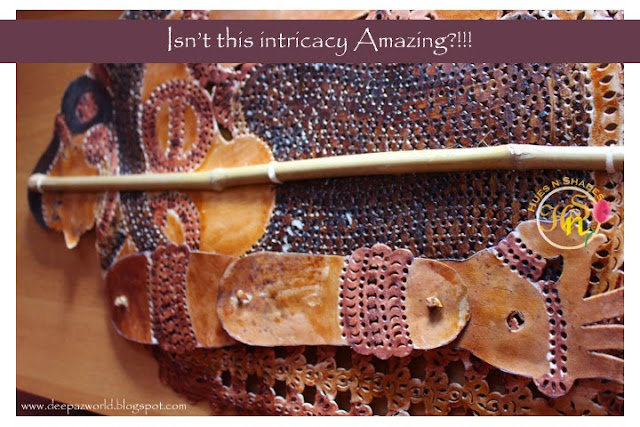 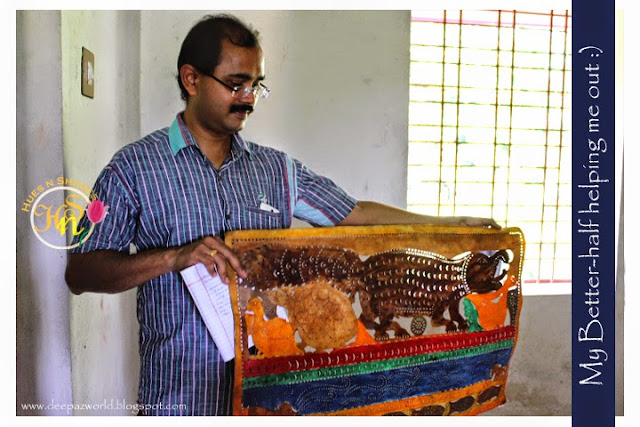 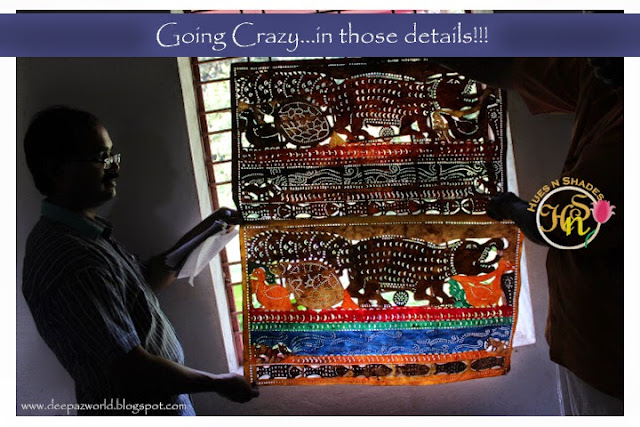 The puppeteers would fast for 21 days before the performance as a ritual as the procedure itself is considered divine and auspicious.

They are also taking the effort to spread the tradition by helping those in research on the subject and by holding workshops and classes to create awareness among the young and the artistically inclined. Their home is a literal treasure trove and to be walking there was like walking amid scholars…of present and past. It requires intense learning of the shlokas from Vedas and Puranas if you need to become a performer of the art. They have the original manuscripts from which the lessons are taught. Their home acts as the Gurukul for the craving learners. 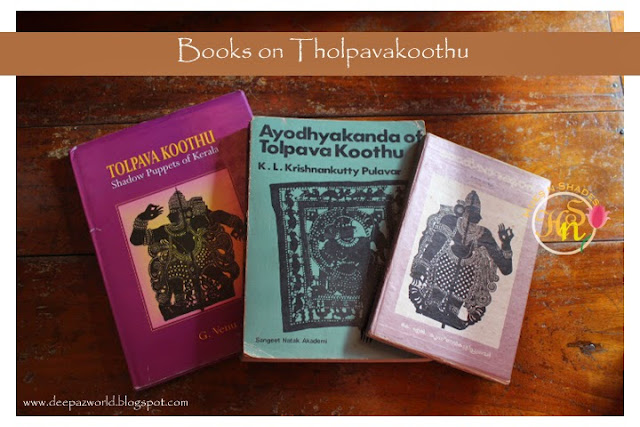 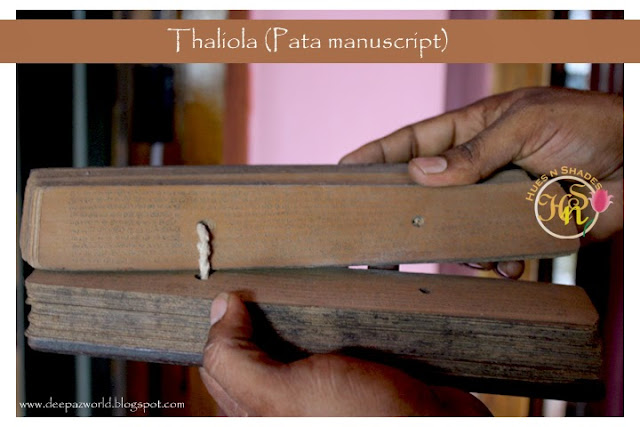 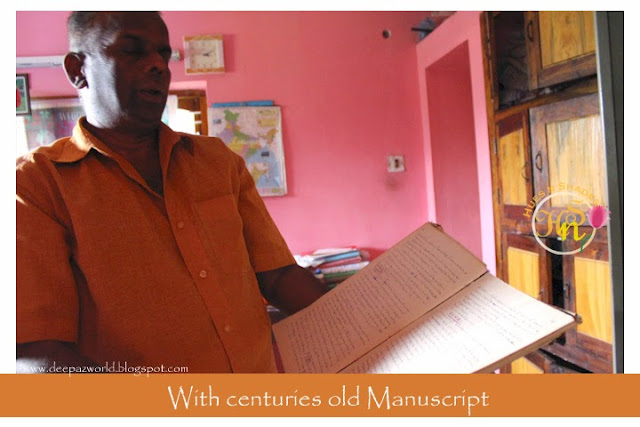 The puppet is also available for sale. You can contact them directly.

This is not a paid post. This is out of my sheer interest to portray the traditional arts of different places particularly my home-town that I took the trip to Tholpavakoothu Sangam and featured them here. I personally feel that they are doing an amazing job!

Many thanks & love to my hubby, Sunil.M.S, for having helped me to do the feature :)

Thanks a lot for visiting Hues n Shades...Please do leave your comments and suggestions. It means a lot to read your feedback!

Photo Credit: A few photographs were sent to me by the family while some others were clicked personally by me.

Wonderful post, thanks for teaching us so many things, I am always fascinated by the cultural diversity. Hugs, Valerie

this was in incredibly interesting read Deepa! Thank you for sharing so many wonderful points of interest and tradition -I can only imagine touching an 800 yr old puppet. To last that long you know there was master craftsmanship and quality materials used. And how lovely to be able to present this tradition in different places around the world.

So informative to learn about other cultures, so very different from my own. Thanks you for sharing your photos. I was most interested in the one of the woman carving the design. What an art!

Wow, amazing. Loved seeing how they are created. Thnx for sharing so much information!

Hi Deepa, yet another lovely post, its really amazing to see the hard work and detailing that goes into the making, good to know that ecofriendly too :-) Would love to see the puppets in action.

All I can say is WOW!!! OK so I am going to say more. LOL This is a beautiful post. I love see the art and artist of your world. My world seems dull in comparison.
Nicole/Beadwright

The puppets are amazing. It is so interesting to see how they are made - a lot of work goes in there. Thank you for showing us some fascinating images.

WOW! What an amazing history and tradition! I'm so impressed with the puppets, their coloring and some of the older pieces you've shared. It must be an incredible commitment on the part of the players - and at 5000 performances! Really interesting and inspiring, thank you! xo

Such a detailed and awesome post!!!i love the tholpavakkoothu concept as well as the puppets !simply superb!