Curator Kanchi Mehta’s ‘Rite of Passage’ is an exhibition par excellence from the usual ones I have been witnessing for some time now. Happening in the silent, serene and dreamy locale of Fort Kochi in the gallery Art*ry, ‘Rite of Passage’ is sailing smooth while presenting stunning adventure in the form of the presented art works.

About ‘Rite of Passage’


A rite of passage is a ceremony and marks the transition from one phase of life to another. It is an internal (as well as eternal) journey of evolution one must go through to pierce into a new role. This could be with reference to birth, beginnings, relationships, endings, and even death. This anthropological term and concept arose as a part of social obligations, when rituals were (and still are) performed when adolescents reached puberty, or when a king would be enthroned or when a woman would become a mother. However, this term marks a milestone at every step in our lives, whether it is trauma, re-location, revelation or love. This passage from one experience to another is enough to alter one’s perception of life as it was, into a re-coded transformation.

As I stepped into Art*ry with my friend, we were greeted by the pleasant Gallery Manager, Edwin David Sam, with whom I had spoken over the phone a few days back to check on the exhibition. He then retired allowing us to ourselves while we slowly and gradually walked from one frame to another. Later, he did join to brief me with the details wherever I needed one.

Rithika Merchant took me by surprise into her realm of myth, history and culture…it was pure fantasy for me almost surreal an experience to see, imbibe and move through her paintings. Each had a mythical story to share…something new for me. It was most appealing for one, I love myths and legends. And second, for all the nuances each art held…even a couple of the canvas was arranged in 'tangram-like-piece' manner. Each element in the painting was entwined in some form with the other either by vines, roots and emotion. It definitely does the same to the onlooker too! 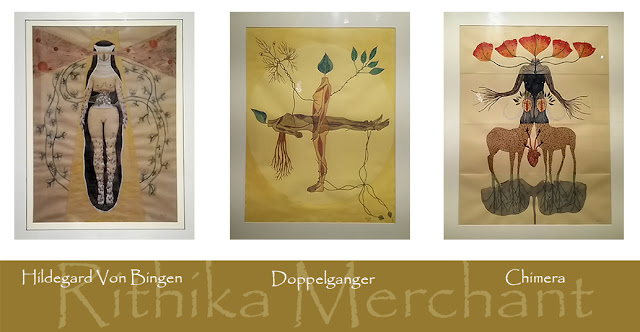 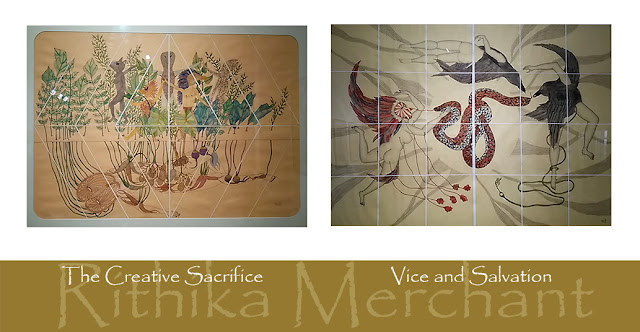 Arundhati Saikia turned out to be one of my favourites as well since her art deals with miniature form (people who have been following me would know that am extremely fond of miniatures). It’s inspired from centuries old Assam miniatures but the subjects are interlaced with modern and the traditional. The beautifully patterned window that opens onto the tranquil nature, the blue Mahavidya with one leg on the lotus, the animals on the spreads and the walls, the dreamy spaces with minute intricate patterns, the perspective of each frame that it presents were all exciting to gaze at. To top it all they were painted on silk! You could make out the fine texture of the fabric and that really sensationalized me!!! There was a kind of newness to it as referred in the Artist statement that the “painted space is a hybrid.” 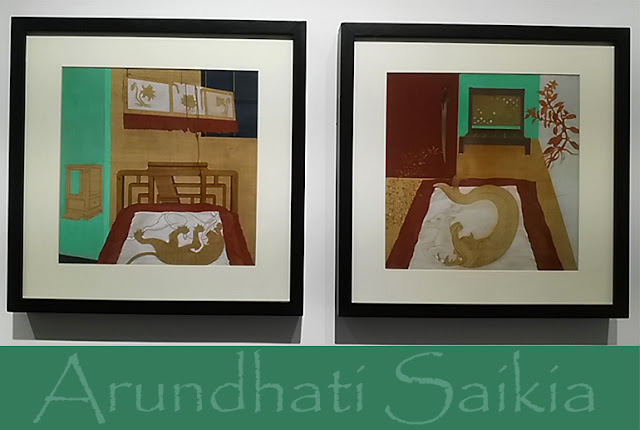 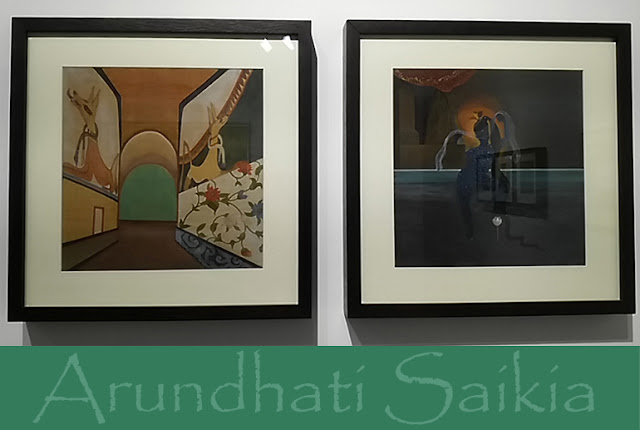 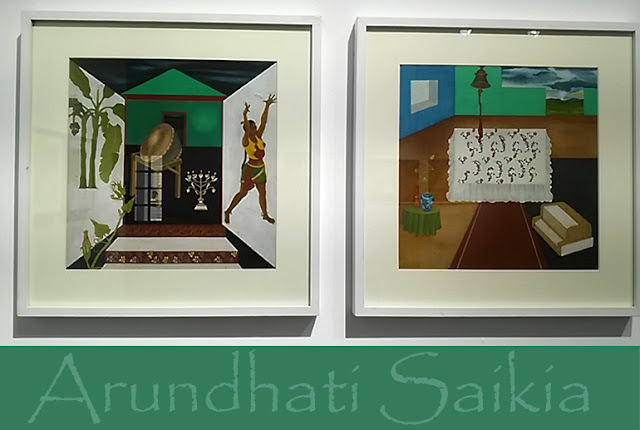 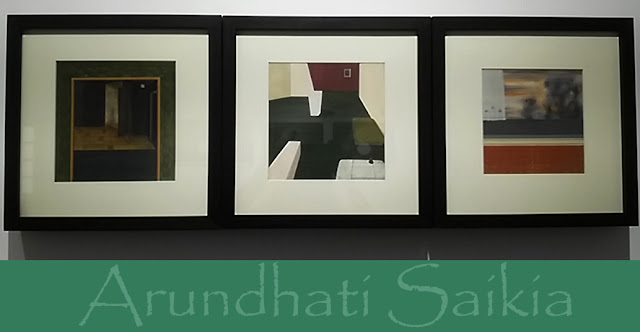 Kedar DK is one genius I would like to meet someday (not that I wouldn’t want to meet the others!!!). One has to see his work to understand my statement! ‘Babylon’ is a magnum opus sort of work; I haven’t yet seen his other works though.

It says: “‘Babylon’ portrays human ethics which have been recognized as the parameter of human morale for centuries.” The question he “poses is the relevance of these traits in the current context, be it culture, society, politics and religion.”

Huge, filled with minute details of terror, horror, grief, pain, torture, dark emotions…it is something one would want to stand still and look at to really grasp the intentions. On the side wall, there were two of his miniatures as well depicting the duality of the same space. I had to enquire about the artist and I was totally taken aback when Edwin mentioned that the artist is just 27 years old!!! I expected a much elderly man to have portrayed the canvas with such intensity! 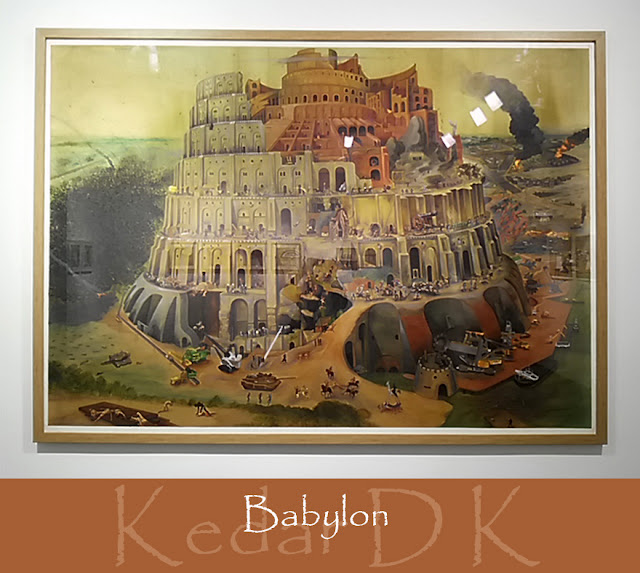 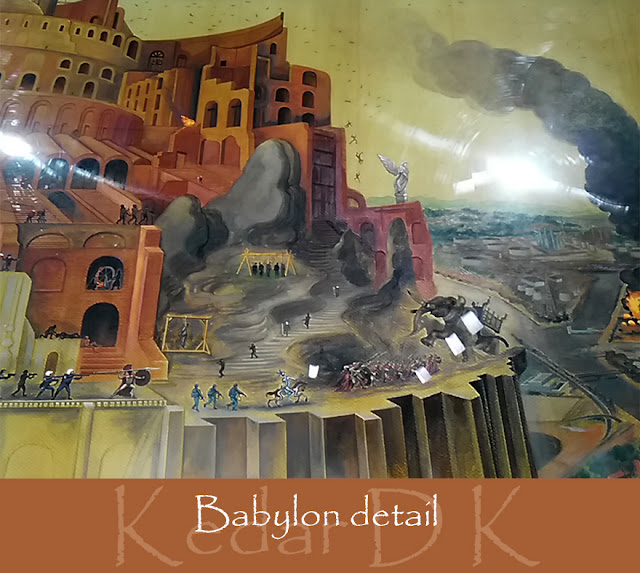 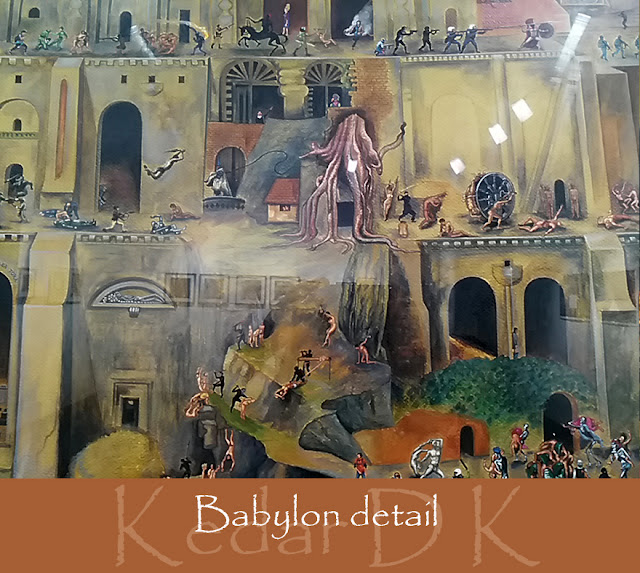 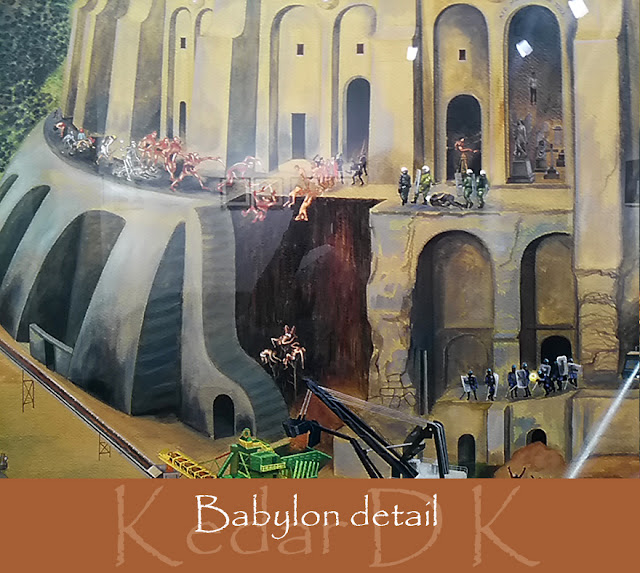 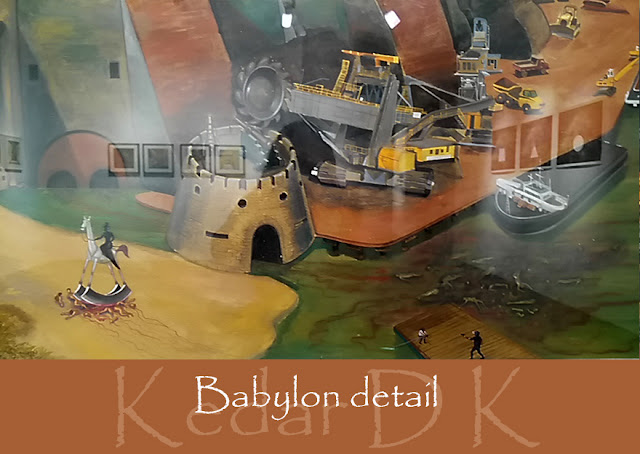 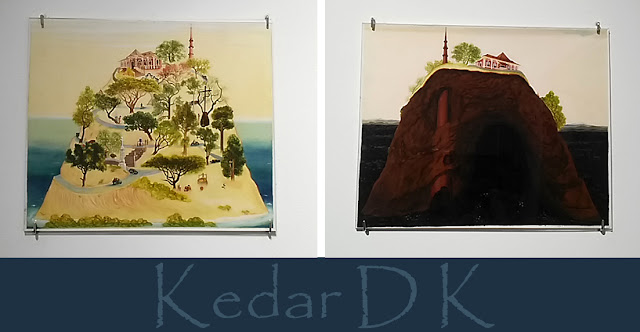 ‘Threaded Whisperers’ by Shivani Gupta, the Photographer and Corinne Elysse Adams, the Story collector and Songstress is a visual treat as they seem to not only narrate a story of the hills and it’s inhabitants but sings their way through sheer poetic touch to the depictions. 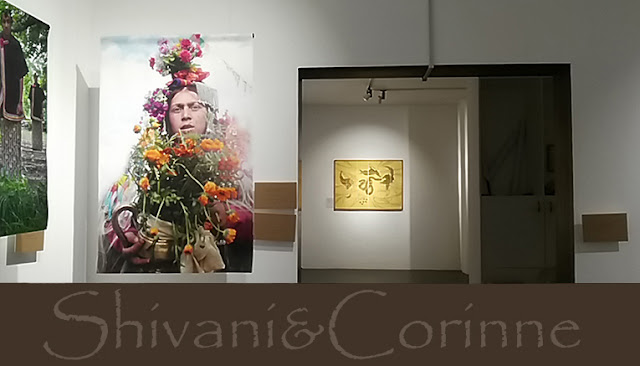 Kalidas Mhamal presents ever day objects with certain dates on it; on fabulous papers yellowed around the edges, beautifully framed. Their presentation is done with care and is appealing. It did remind me of Andy Warhol who had done some exceptional art on omni present subjects. 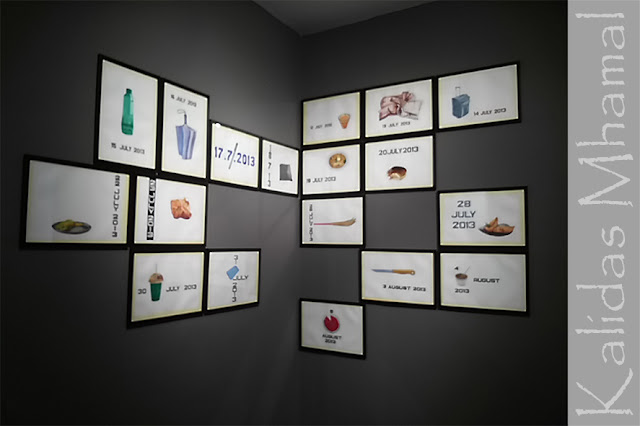 Ratna Khanna’s works were minimalistic and as the note says she is interested in contextual landscape; which for her is a medium rather than a genre of art.

If you are someone like me who tends to be aesthetically inclined, Ms. Khanna’s work was difficult for me to grasp.

Thank you so much for sharing this valuable information and introducing these artists!

Thanks for sharing this amazing exhibit. Your blog is always such a pleasure to visit.