Any bride is ever so gorgeous a being the wedding day that all eyes are set tight on her save anything else! Brides are always a fascination to be watched at (and to have been one is no less a fascination too!). The adornments both inward and outward  places her in a kind of magical realm where she would rule, definitely, even if for a short span! :) 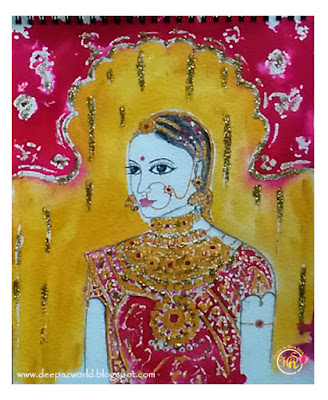 When this week's color was mentioned as RED+RED+METALLIC, the instant thought was that of an Indian bride! That got me thinking about other brides in our treasure trove of arts of the Masters! There are a good number of brides being painted and what stuck me recently from the book I was reading was two of the paintings which coherently depicts the time of Art Nouveau* and the inner workings of the artists. My bride has no connection with the mentioned paintings though, for she is as real as she can be in the present world! The bride all dressed up and submerged in gold! The bride of the times! The picture is referred from Jodha Akbar (movie). 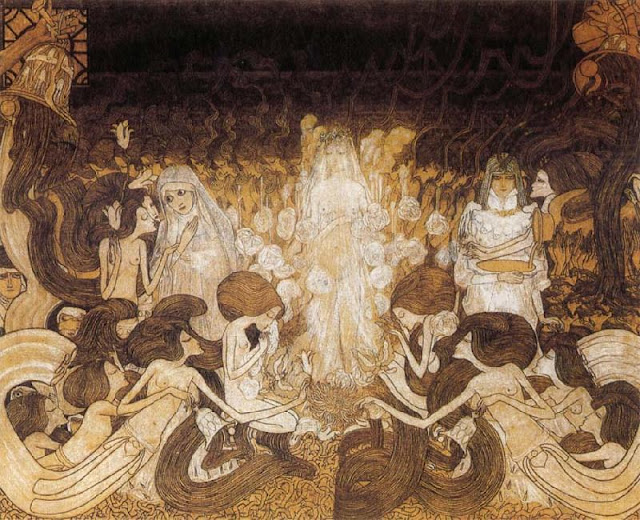 The lean and lanky figures with intricate patterns and lines around, the colours that provide a backdrop of eeriness, the figures beaming as a multitude...the three brides - the human in the center, the bride of Christ in the left and the courtesan(also wearing skulls around her neck reminding us of Goddess Kali) on the right are all juxtaposed to form a coherent whole. It however imparts a definite unsettling experience! 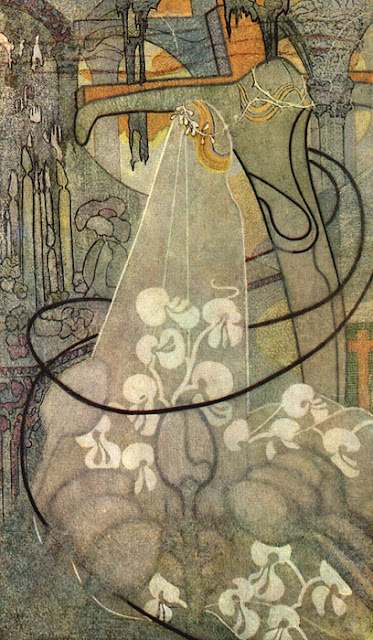 Again, one clearly observe the art nouveau influence in the painting while the bride is symbolic of being spiritual, it also stirs a query in us by depicting the tulips on her gown which of course retraces away from spirituality and more into the reality of life. Prikker though not a well-known artist has his place in almost all major Dutch and German museums.

From 1880s until the first World War, artists took interest in the natural world around them. It influenced art and architecture in applied arts, graphic arts and illustration. Lines and curves were derived from botanical studies, nature being the primary source of inspiration to break away from the redundant past styles. The forms and designs flowed as a metaphor of the newly availed freedom. It sought the unification of fine and applied arts which they did achieve.

Linking it to SOC and PPF!

Hi Deepa! Your bride in all of her glory and bling is absolutely gorgeous! I love your work of art that you created this week using the SOC colors. And the other art that you shared was very beautiful and interesting to read about! Thank you so much for sharing this with us!

What a gorgeous bride!

Very pretty bride for soc...thanks for sharing the others too! Interesting!

Your bling bride is lovely in the rich colours of this weeks SOC. x

I hated being the centre of attention at our wedding, I'm not one to dress up and get nervous when people are always looking at me, (says the girl with the pink hair :p)

You bride art is very pretty and looks very intricate :)

Love the paintaing you made. Simply beautiful and thanks for sharing such lovely anecdotes.

Wow, Deepa - your bride looks absolutely stunning, as a bride should be! Also, interesting was reading about the artistic depiction of brides in older times.

Your creation is wonderful! I like the colors you chose and the overall design.

Astonishing creations! Thanks Deepa for sharing with us. :)

Awesome portrayal of a bride....loved it :)

You are just awesome, so beautiful works :)