The Kerala Museum of Madhavan Nayar Foundation located in Edapally is a place one needs to delve in at leisure. It sure is a place where every child and adult needs to find themselves in, at least once, to get to know the history, art and culture of Kerala. It is the realization of a passionate dream of an industrialist-philanthropist, Shri. Madhavan Nayar. It comprises of the Museum of Kerala History, Paintings and Sculptures, Indian Miniatures, Dolls' Museum, Center for Visual Arts and Projection Studio.

Recently, they took a major initiative in conducting Face2Face, an art collective which happened from 18th to 23rd September. 11 acclaimed artists from across India were brought face to face into a mesmerizing creative space embedded in nature to result in an outpour of ingenious language through their  art.

This prominent and high profile Art Residency happened under the guidance of internationally acclaimed independent art curator/advisor,  art historian and a writer, Sushma Bahl who carefully chose not only the artistic talents but also the thematics of the residency. Mrs. Bahl was the Art and Culture Director of the British Council India. She is a member of the Governing Council of Sanskriti Arts Foundation in New Delhi and the Society of the National Museum Institute. 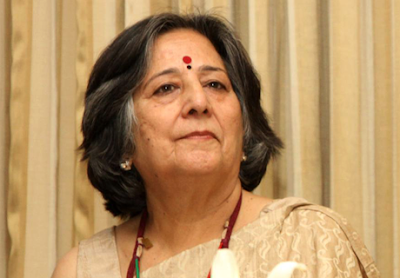 Sushma Bahl has steered the first-ever Festival of India in the UK and South Korea besides artists’ residencies and collaborative cultural projects in India and in South Africa, Germany, U.K. and Bangladesh amongst others. Mrs. Bahl’s extensive engagement with the arts includes Exhibitions and Art Fairs across Asia, publications, catalogues and Artist’s books. Her most recent work, Forms of Devotion, is an exploration of the Spiritual in Indian Art under the aegis of the Museum of Sacred Art, MOSA, Durbuy, Belgium. She is the author of 5000 Years of Indian Art (2011) by Roli Books. She has also edited and written for books on artists Thota Vaikuntam, Paresh Maity, Satish Gupta and Shuvaprasanna.

The Residency was inaugurated by Kattoor Narayana Pillai, Chairman of Kerala Lalita Kala Akademi. It was followed by an infotainment session on Edaykka, a musical instrument which was once confined within the religious and divine spaces, by Krishnaprasad Thripunithura; a maestro in that, accompanied by his son, Arun Krishnaprasad who enlightened us with the secrets of the instrument, it's making, the legend behind it and the modern scenario and perspective compared to the erstwhile one. 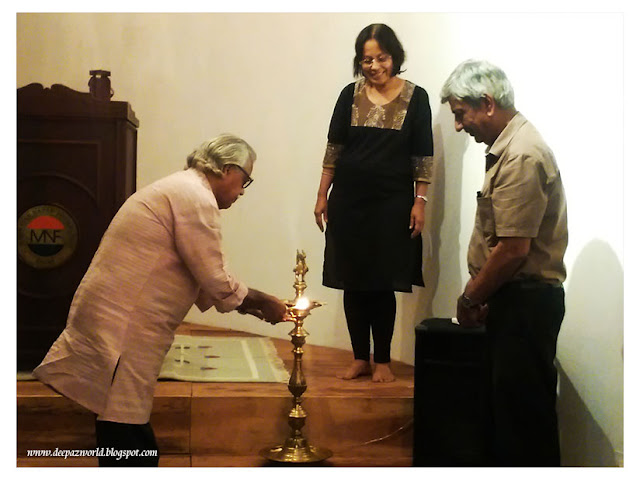 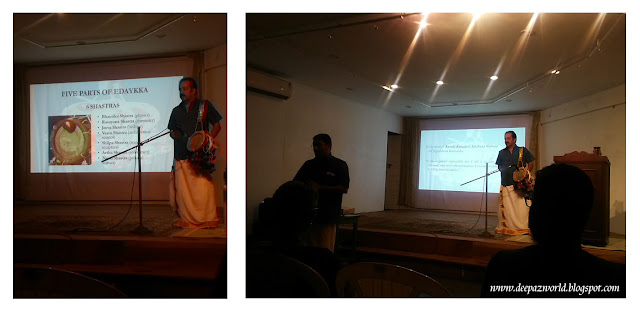 
The artists have worked in wide range of mediums from oils to acrylics, watercolour to found objects, etchings to sculpted paintings. I would like to mention that each and every artist who took part in this residency and with most of whom I could interact were full of life!!! They were ever-ready to share their experiences, joy and to talk about their art. It was, personally, an amazing experience to connect with them.


I had the opportunity to meet and talk to Sushmaji, the art advisor; thanks to Arundhaty Nayar without whose invitation that would not have been possible. Here's what Sushmaji had to say about Face2Face Art Residency program.

"As the title suggests, it is offering an opportunity for an encounter, an encounter between the artists and the museum, an encounter of an art that is done today and an art that was done or created some two- three decades ago. It’s an interaction, face to face, of the artists from different parts of India who have gathered here together. There is that interphase, interaction; which helps in looking at each other, learning from each other, talking to each other, sharing and networking. That becomes the essence of Face2Face. This museum provides a wonderful opportunity for that, because it has such a wonderful collection and such an amazing face that artists are finding it very stimulating and inspiring!"

Face2Face and other Residencies

"Each Residency is focussed on a definite thrust for example here, the interaction between the artists and  the museum, between what they are doing today and what was being done three decades ago, that is the main focus. For ex. the residency I had done with artists from Asian countries and India was about cultural synergy between different countries and the cultures of different countries. Each project depends on who the players are, who the involved artists are - that gives a definitive focus. What we often try to do is to offer a mix of structured program and a bit of free time for the artists to follow their own lead. Somebody might like that you were talking about like the leather puppets… somebody might find that very interesting. They would want to go and meet those people. So they have an opportunity to do that. They also have time together making new works and actually sharing information of their work experiences, about the issues that concern them, their technique, their way of approaching work and market and everything else. So I think, broadly speaking, a mix of structure and open-ended program which gives the artists both a purpose and some freedom are essential for a successful residency."

Theme of the Residency

"I would have liked them to create work inspired by the museum, the locale and Kerala.  Because the time is short (6 days), the artists who have come here, have brought half-finished works; they did read up, so I think in some discreet, small way like Sidharth, the artist who is up here, working right now…he talked about these ball fruit which is hanging on the tree nearby and the dance form, Mohiniyattom; these two things have inspired him because he came across these two features here. So in some ways, direct and indirect, it does make a difference of what it is and you can give the artist a theme but we don’t want to restrict it so much that their creativity gets constrained. You want to have a link that links it altogether; that link was face to face; among themselves and with the others. Looking at the work, am quite amazed and impressed that they have managed to produce so much. There is so much vibrancy, colour and technique to it for example Natesan is using computer discarded…found objects. So it’s about recycling, about environment, about reuse, about conservation. Viren Tanwar has done acrobatic theme, Sharmi has used paper work and cycling again about issues to do with pollution, health and the like. So everybody has picked up different threads and they have created works inspired by that thread."


The exhibit was formally arranged at The Taj Gateway, Kochi with an impressive talk on 'The Art of Buying Art' by Sushma Bahl. Thanks to Sushmaji and Arundhatyji for inviting me. it was wonderful to enjoy the whole event and make it a memorable experience. These are a few clicks of the artworks by the jovial, zesty and amiable artists' who deserve to be in the limelight. 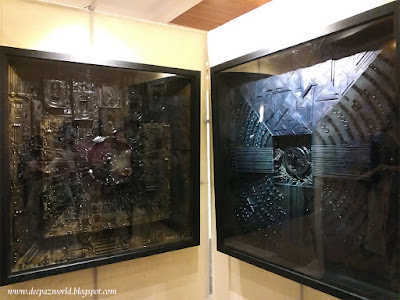 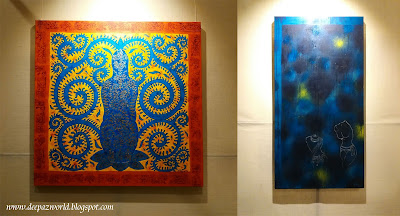 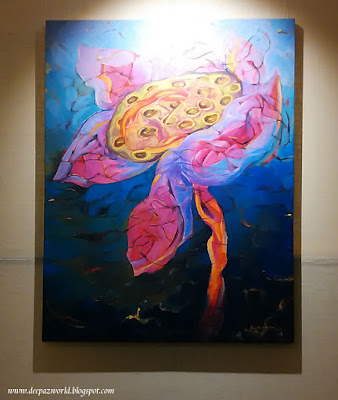 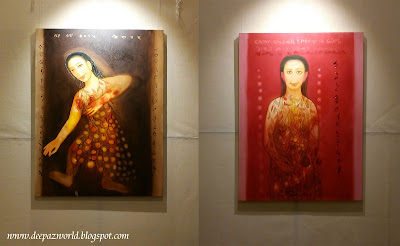 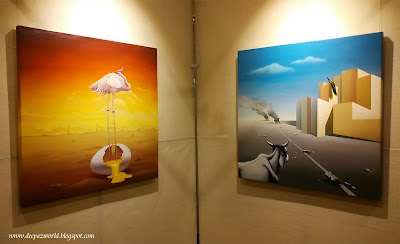 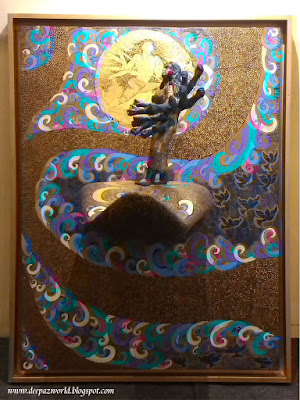 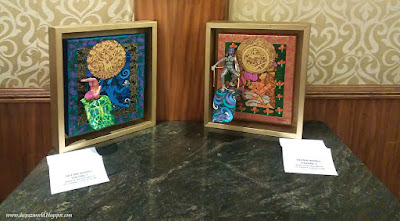 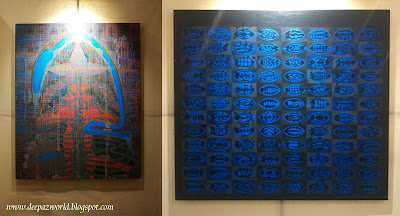 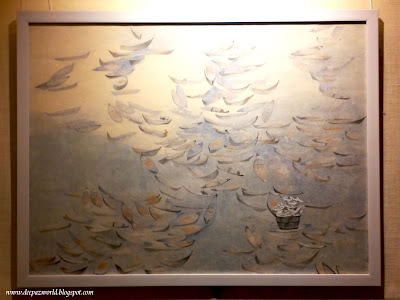 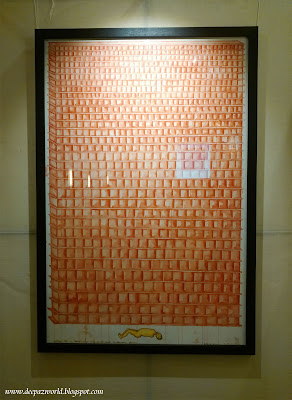 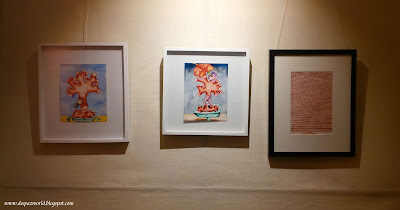 
Who could have thought that some unused keys and unwanted objects could be moulded into beautiful and majestic art in Haribabu Natesan's work! There's feminine energy-vibes that surround and embalm the works of Kanchan Chander, Kavita Nayar and Seema Kohli be it the feminine form, the embryonic or the divine! Even Sidharth has incorporated that pulsating energy in connection with the-all-encompassing nature while Sudip Roy has sensuous female form alongside the Eternal Lover. Pratul Dash and Zakkir Hussain speaks about displacement-urbanization and colour-chaos in the present scenario; a socio-political commentary. Viren Tanwar uses unpretentious female forms to voice an endless narrative! Sharmi Chowdhury exposes a certain fun-playfulness while commenting on the day-to-day affairs and the environment. Pradeep Puthoor with his intricate art and unearthly forms mesmerized the onlooker.


That's all for today's post, friends...Thanks to one and all who visit this space, take the time and effort to drop sweet-supportive comments.. Thank you dear friends!

that is marvellous and thank you so much for sharing .. even the likes of me got t osee some great paintings ..

Beautiful work of art by each of the artists.

Hi there! Thats so wow! So glad to have dropped by here :-)

It must have been a wonderful experience Deepa to see the exquisite collection of art work. Thanks for sharing the pictures of the art works.