Super Blue Blood Moon - Unto You

31 Jan was our Super Blue Blood Moon day! None would have missed it. In fact, the whole world was over it. This takes me to the question, Are you a moon person? A moon-gazer? I am one. Even when it's uneventful I keep peeping at the moon. So it's no surprise if I watch the whole episode of the Lunar Eclipse, my daughter was with me too...I think almost everyone must have done it. After all, such events happen once-in-a-blue-moon, right?

In our part of the world, it wasn’t blue or Super! However, the Super Blue Blood Moon day did have its effect on me... Almost during the whole event, I was on my balcony watching the different phases the universe was playing with! I couldn’t capture a single picture properly!! So here's  how I Played with the Blood Moon! Yesterday I experienced my own science and magic of the Universe! In the second picture, you would see a much red moon as I was trying to see that effect. They bent into a curve, lined up... all for my sake! 😊😊😊

You rose in the eastern sky
With a silver crescent of a ring and a blood red hue
Was it anger or passion that you wore
Couldn’t decide for it could be both.
Night after night you rose above
Spread a silver blanket across
Urban and rustic dwellings alike
But did it matter to sapiens at all!
You are taken for granted, O nimbus One!
The world has bulbs, lights and all it needs
To light up this realm...
Yet, there are a few who miss you
When you don’t make your appearance
Who keenly watch the ever-changing phases
That you seem to be a master after all...
Is that inconstancy that you speak for?
Or is it the change that you vouch for?
The ebb and flow of life that you offer?
Anything that He learns or just suffers?
Like it or not, you do influence
In the wails of a lunatic and the howls of the wolves
Like the waves on the oceans and its undercurrents.
Not to mention artists and poets
Who have attributed countless allegations.
You are a witness – silent and surreptitious
Of past, present and the future...
The world sleeps when you are up
You see the real man in all his ‘grandeur’
Night after night the ghosts enter
To clamour and create chaos,
To loot and plunder, to lust and revel,
To make sacrifices, to celebrate death,
To reign a world that you no longer recognize.
Still, you embrace one and all
For you still live with the hope of a new-found
Land where dreams blossom in little children
And is strewn across the cerulean sky
Where flowers and saplings grow in secret spaces
Waiting for the eminent rays followed by your dews.

This is actually the progression of my painting of the moon and then I added it all in one frame with Photoshop. 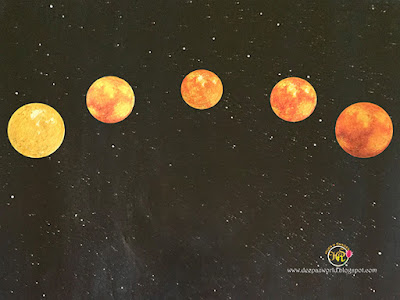 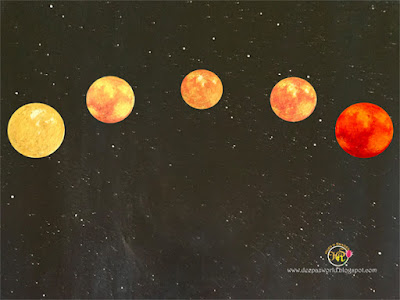 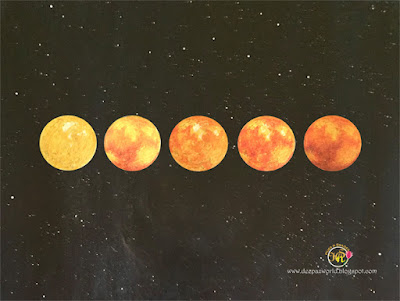 Linking it to the Awesome girls in Paint Party Friday! Thank you for the feature on PPF page!!! I am over the Moon!!!!

The blue part (don't know how it got that name) is that it is the 2nd full moon in one month. I only saw a big moon that night. It was cloudy so I wouldn't have seen the eclipse if I had stayed up for it. This art piece you have done is gorgeous.

lovely moon art. I too am a moon gazer:) However, sadly our sky was thick with cloud cover so I didn't get to see it at all:( Your poem is absolutely beautiful. Happy PPF!

I didn't see moon here but on my blog there is just one kind of moon. Interesting to see yours.
Happy PPF ❤🌛

Yes, I am a moon person, but can only see it on its' ordinary nights! Whenever there is a spectacular event, here in Chicago with cloudy weather and many trees in our neighborhoods, everything is totally blocked out! I tried for the eclipse in the summer, but also had no luck there! Your phases of the moon is wonderful! Have a good week.

Beautiful moon painting, and poem! I have always been inspired by the moon myself! I have maybe a dozen moon poems, some very short, that just spill out of me at times when I see that lovely orb!

Such a beautiful poem Deepa. I love your moon progressions too - wonderful artwork.
Congratulations on your feature on PPF!

I missed it :( I couldn't get outside to see it and I am a big moon person!

This is a wonderful record of a beautiful event. Here in the rainy Willamette Valley of Oregon, it was too overcast to observe. Thank you for posting this exquisite rendering.

Deepa,
Wow moon-girl!
Awesome paintings both with the words and the colours.