“See the mountains kiss high Heaven
And the waves clasp one another;
No sister-flower would be forgiven
If it disdained its brother;
And the sunlight clasps the earth,
And the moonbeams kiss the sea -
What is all this sweet work worth
If thou kiss not me? ”
Percy Bysshe Shelly, Love's Philosophy

Since it's "that time of the year", why not revisit some artworks that would inspire some more love? This is my Top Ten Art Kisses, not entirely in this order though.


Rodin himself described the subject of The Kiss as:
"... a theme frequently treated in the academic tradition, a subject complete in itself and artificially isolated from the world surrounding it; it is a big ornament sculpted according to the usual formula and which focuses attention on the two personages instead of opening up wide horizons to daydreams."

“Make me immortal with a kiss.”
Christopher Marlowe, Doctor Faustus 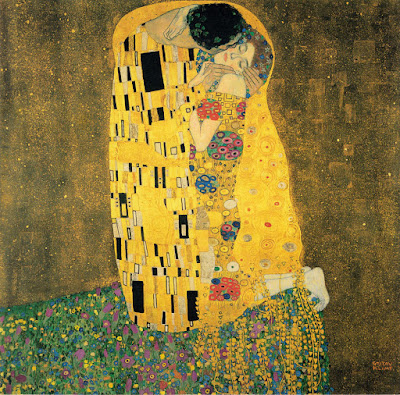 Gustav Klimt painted "The Kiss" (1907-1908) at a time when his career was on the down slide. But with this painting, he achieved fame and success like never before. It was bought even before it was finished by the Beldevere Museum. It's one of the most reproduced paintings which portrays lovers completely oblivious to the world immersed in their kiss, it beams with tenderness. It's probably the first time where the woman becomes the protagonist rather than an object of sexual desire in Klimt's paintings which were often accused of being pornographic. It is also one of his most conservative as well as they are fully robed. The fact that most caught my attention is that the painting has 9 kinds of gold leaves used in it and it does invoke awe in every person who actually stands before it. It is around 6x6 feet. Klimt was said to have been inspired by the gilded Byzantine mosaics of  Basilica of San Vitale when he visited Ravenna, Italy.

“Kiss me, and you will see how important I am.”
Sylvia Plath, The Unabridged Journals of Sylvia Plath

What seems to attract me to Edvard Munch's "The Kiss" (these are two versions - 1897 and 1892) is that the lovers seem to fuse here. The faces melt into each other and one cannot be distinguished from the other. It is a matter of total surrender pushing aside all the ego...moments perhaps that is rare. One could also feel the movement - around the lovers in the left and the wind-blown curtain in the right. One could feel the air if one closely observes. Munch has a couple of versions of The Kiss and these were actually woodcuts.

“No one has imagined us. We want to live like trees,
sycamores blazing through the sulfuric air,
dappled with scars, still exuberantly budding,
our animal passion rooted in the city.”
Adrienne Rich, The Dream of a Common Language 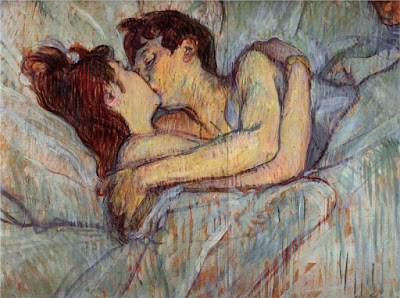 The strokes in warm colours merged with the strokes in cool are scintillating in this painting, In Bed: The Kiss (1892) by Henri de Toulouse-Lautrec. Another aspect that makes it unique is the provocative and unconventional subject matter of Lesbian love. Again, there is this tenderness portrayed here by Toulouse who was constantly visiting brothels for his subject-matter and who was commissioned to make Moulin Rouge paintings. He has portrayed the genuine depth of universal love without making a judgment or being reduced to a voyeur. "I paint things as they are, I don't comment." Toulouse had once mentioned. 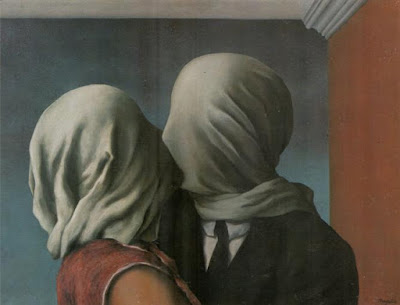 Rene Magritte's "The Lovers II" (1928) is one of mystery, isolation and probably frustration which goes more with the modern times. The room one can notice is insignificant, nothing interesting happening there while the focus is on the lovers who are veiled. The intimacy and passion are disrupted by the veil and that is what is the most intriguing here.

“O, here
Will I set up my everlasting rest,
And shake the yoke of inauspicious stars
From this world-wearied flesh. Eyes, look your last!
Arms, take your last embrace! and, lips, O you
The doors of breath, seal with a righteous kiss
A dateless bargain to engrossing death!”
William Shakespeare, Romeo and Juliet 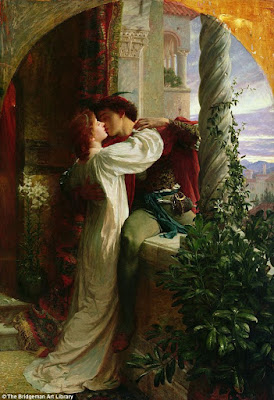 The most famous star-crossed lovers sharing a kiss on their wedding night which was supposed to be their last painted by Frank Bernard Dicksee in 1884 was voted as the most romantic artwork in Britain. This Shakespearean story is so popular that it is ingrained in the hearts of the young (and old lovers alike) worldwide. Perhaps that makes it enticing all the more. I particularly love Juliet's flowing garb, the foliage and the distant perspective of the mountains and the sky, not to mention the grey-golden-yellow arch.

"A kiss can be a comma, a question mark, or an exclamation point."
Mistinguett 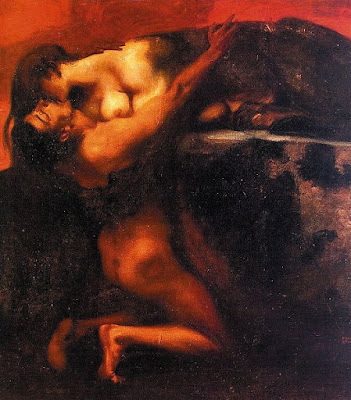 "The Kiss of the Sphinx" (1895) by Franz von Stuck is one where he portrays a femme fatale who grabs a man with her lion's talons while she ardently kisses him. It's eerie in the atmosphere it creates, bold and raw in colours to the point of engulfing the viewer and almost demonic and brutal its adherence.

“Now a soft kiss - Aye, by that kiss, I vow an endless bliss.”
John Keats 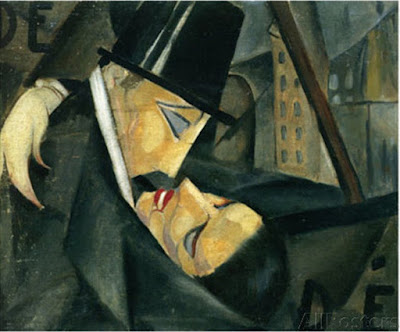 Tamara de Lempicka, "The Baroness with a Brush", was the queen of glamour and art deco. Her "The Kiss" (1922) is an amalgamation of cubism and neo-classicism. We are left to assume whether they are about to kiss or it had already happened. The only "colour", here, I feel are the faces of the lovers and the lady's crimson lips. They stand amid the bleak and grey surroundings that don't inspire love and yet they seem to be totally immersed in each other.

The kiss itself is immortal. It travels from lip to lip, century to century, from age to age. Men and women garner these kisses, offer them to others and then die in turn.
Guy de Maupassant, The Complete Short Stories 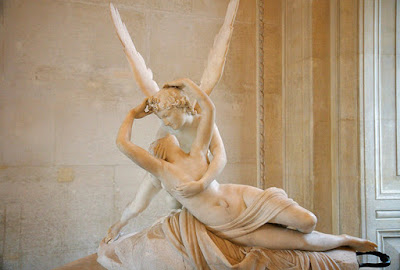 Amor and Psyche by Antonio Canova (1787-1793) is an "amor-dripping" work in sculpture which resides in Louvre, France. It depicts the just awakened Psyche supported by Cupid, the God of Love. Psyche who had passed into a fatal sleep was woken by Cupid's gentle prick of the arrow. Here, she languorously lies in Cupid's arms in a tender embrace most possibly followed by a kiss. The legend ends in their marriage with Psyche made immortal and assigned as the Goddess of the Soul. There is an interplay of textures here - the skin, the fabric, the hair, the rock, the wings, the quiver and so on. The sculpture can be viewed from different angles, there's no one perspective.

‘Alas, that love, so gentle in his view, Should be so tyrannous and rough in proof’
William Shakespeare, Romeo and Juliet 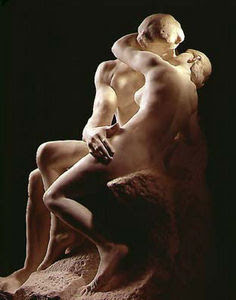 The passion, the romance, the total embrace was a forbidden one. Originally called Paolo and Francesca, Auguste Rodin's "The Kiss", 1884 sculpture was based on Dante's "Divine Comedy". It captures the moment of the first kiss by the "adulterous" couple who are brutally murdered, soon after, by Francesca's husband. They are trapped in the second circle of Hell. There's teeming energy here while the lovers' are unaware of their approaching fatal fate. This sculpture is a masterpiece as well and plays with different textures and can be viewed in 360 degrees.

“You and I, it's as though we have been taught to kiss in heaven and sent down to earth together, to see if we know what we were taught.”
Boris Pasternak, Doctor Zhivago 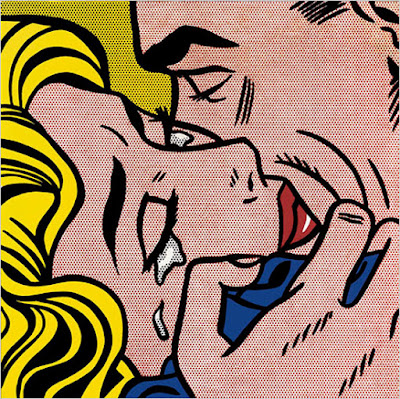 At one look it could be passed on as a comic strip but it is Roy Lichtenstein's "Kiss-V" of 1964 which is a hallmark of his innovative pop art with primary colours and Ben-Day dots. It is ambiguous as to whether the lovers are breaking up or reuniting but I would go with the latter! It's quite melodramatic a scene with eye-striking colours and intense display of emotion. The dramatic effect is distinct.

This list doesn’t show allegiance to any source, it is a potpourri of my own observations with what I have read on many websites of the artists', videos I saw, articles I read and the like. I haven't seen any of the artwork in person but someday I would love to! There are of course many more paintings that could be talked about. These are the ones that forged ahead as I thought about this topic. You could leave me your favourites in the comments. I would love to see them too.

The olden kisses were more passionate, it seems.

I am in love with the opening lines by none other than Shelley...then your post, flowing like a river, showcasing masterpieces, some of which, I was not even aware of! Beautiful.
Thank-you, for the post, Deepa! :)

Lovely, artistic post. You have started the post so beautifully with the poem by Shelley and ended it with the famous sculpture by Rodin. What a coincidence that an exhibition of Rodin's work was recently held at the British Museum.

I guess the one experienced on the wedding night carries the most significance. Difficult to choose which one is the best description!

Kisses convey passion unlike any other way. Loved these artworks. They seem more inspiring and real than the kisses we see in movies nowadays.

Lovely reminders of some of the best LOVES throughout the centuries! Love makes the (art) world go 'round for sure! Great post and I agree with your Top 10! Happy belated PPF. Hugz, Rasz

Just beautiful. Something special about a kiss.

Such a beautiful passionate post celebrating love and life, Deepa. Lovely assortment of fabulous works of art, and your distinct observations helped me to appreciate them better. Enjoyed reading the quotes as well, a wonderful compliment to the beauty!

Great works.
The first one looks very familiar. I think I saw a copy of it at a doctor's office that I used to go to. Or it must be another of the artists's works -- but in the same style.