Alserkal Avenue, named after its founder is the brainchild of Abdelmonem Bin Eisa Alserkal, was established in 2007 is situated in the industrial neighborhood of Al Quoz spreads across a space of 500,000 square feet which houses not only numerous galleries of international repute but also project spaces, residencies, non-profit artists' studios, concept stores, event facilities and even cafes' and food outlets. It was expanded in 2015 to give it the look of today. Situated in Dubai's industrial quarters, this Avenue is a cluster of architect-designed warehouses that aims to foster the creative spirit by bringing together collaborators from diverse artistic disciplines, encouraging open dialogue, sharing of ideas and collaborations to bring those ideas to life.

I visited the Avenue a second time, a couple of days after, to complete my visit to the rest of the galleries. I had two hours at hand and I started from where I had stopped the last time. I began with Leila Heller Gallery.

Counterpart of Jean-Michel Basquiat and Keith Haring, Kenny Scharf’s paintings and assemblage works in "Inner and Outer Space" are fun and colourful. They instantly invoke the childhood exuberance which is just a façade that leads to much darker and graver issues of consumerism and ecological concerns. They not only remind of pop culture as well as drip paintings of Pollock but also permeates a sense of street culture.

“These discarded toys and television backs are considered poignant objects, resonant with emotion. “Each of these objects carries a story,” Scharf explains. He considers how people may have struggled and sacrificed to buy these toys and TVs, and the intense relationships that children and families have with them. Scharf brings to life these inanimate objects in his work.”

The exhibition is on until 31 Aug. 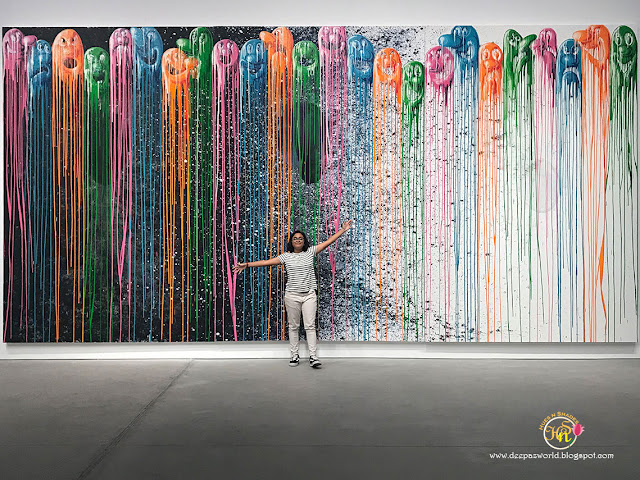 Look at the dimension of this painting! 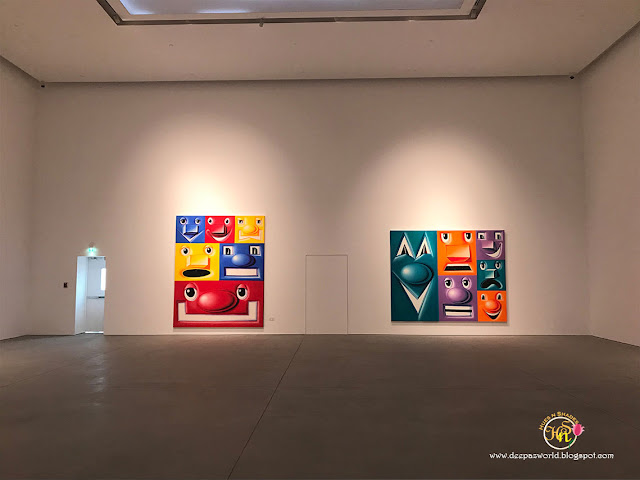 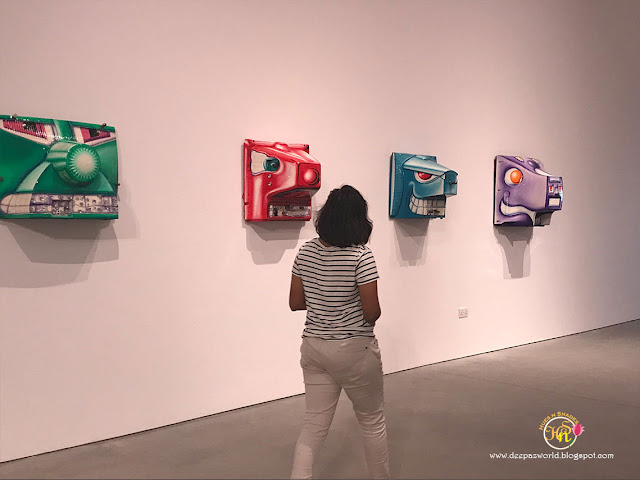 Another exhibition, currently happening, in Leila Heller is Philip Taaffe’s works which would immediately take you to Islamic architecture and mosaic patterns. They are bright, colourful and layered which range from linocut, woodprint, marbling, silkscreen, rubber stamp and collage including free gestural paintings. There is an unmistakable fusion of the ancient and the modern with an uncompromising vibrancy to his works.

“I think the power and possibilities for painting today has to do with binding it to a cultural legacy,” says Taaffe. “Painting is where these symbolic languages or forms somehow crystallize and reveal their ancestry — and that in turn shows a certain sense of future possibility.”

The exhibition is on until 31 Aug. 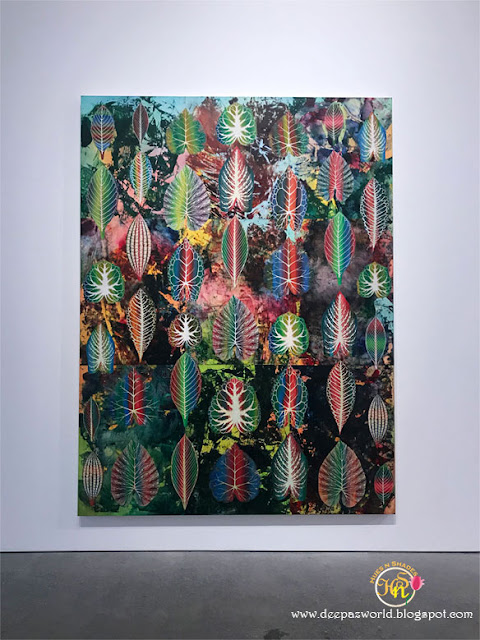 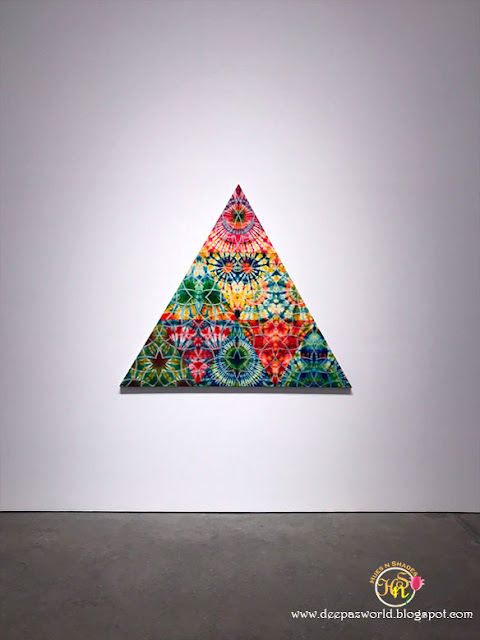 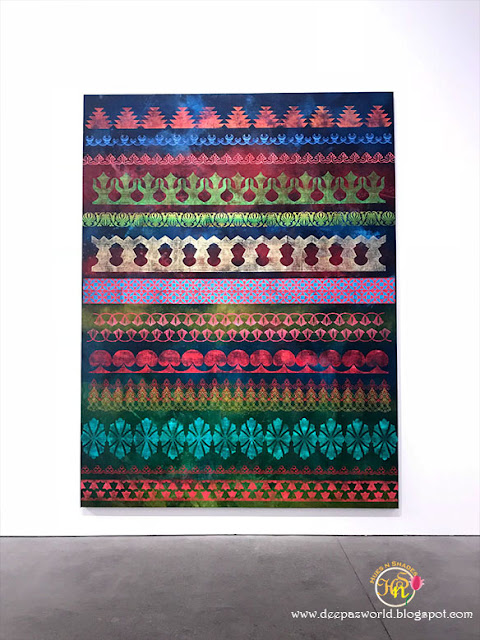 From Alexander Calder, Picasso through to Anish Kapoor, Marc Quinn and Pablo Reinoso, many of the greatest artists and designers have turned both their thoughts and talent to jewelry. Bracelets, necklaces, earrings, rings, these art pieces cover the entire spectrum of jewelry. Often imagined as a proof of love, these artists' jewels originally intended for their families and close ones. Custot gallery mentioned that they were "delighted to present the first artists' jewelry exhibition in Dubai and in the region" as part of their "Art and Jewelry" exhibition. There was an apparently interesting ongoing dialogue between art and jewelry by the various artists

“A piece of ‘artist’s jewelry’, like a painting or a sculpture, is a work of art. Springing from the same creative approach, it possesses the same force, poetry and ability to provoke, sometimes even the same humor. It is only their ultimate purpose that distinguishes one from the other” – Diane Venet, Artists’ Jewelry Collector.

The exhibition is on until 31 July. 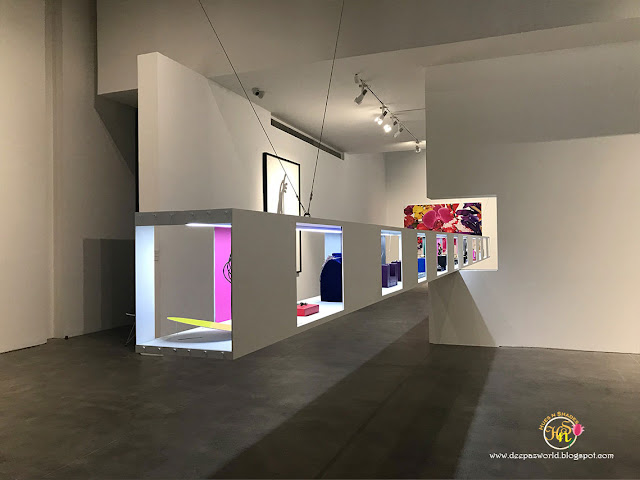 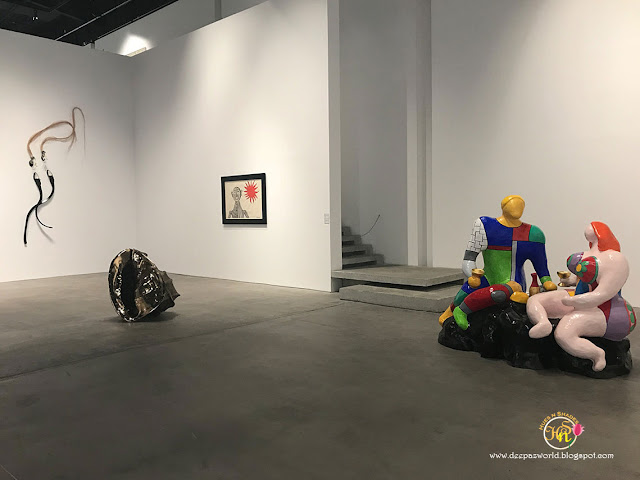 And that's a Picasso (the right end figures) 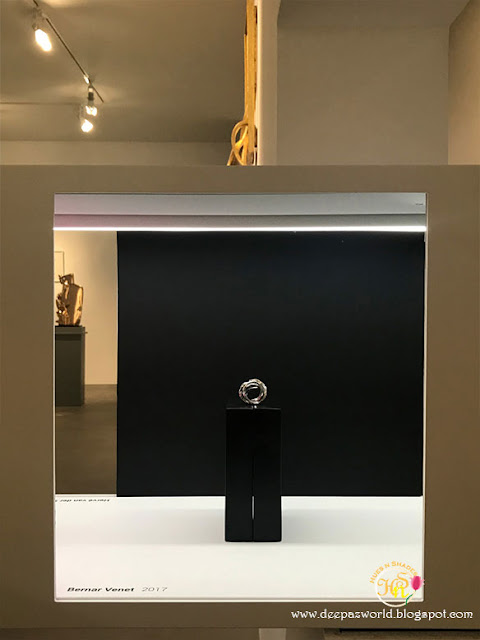 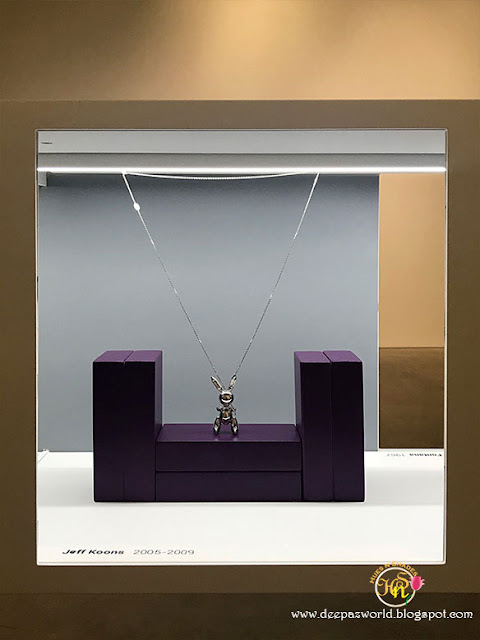 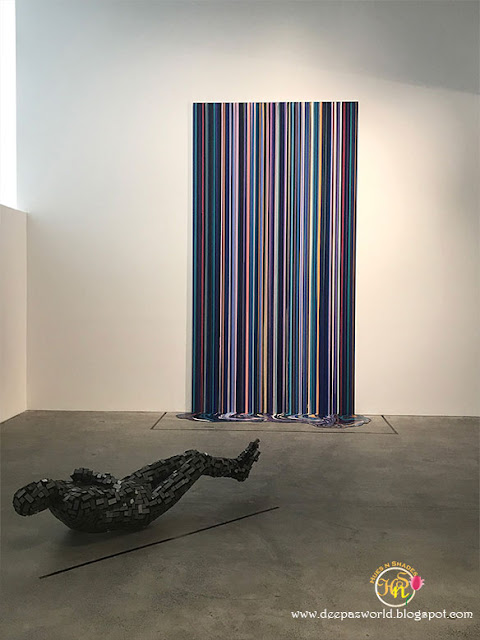 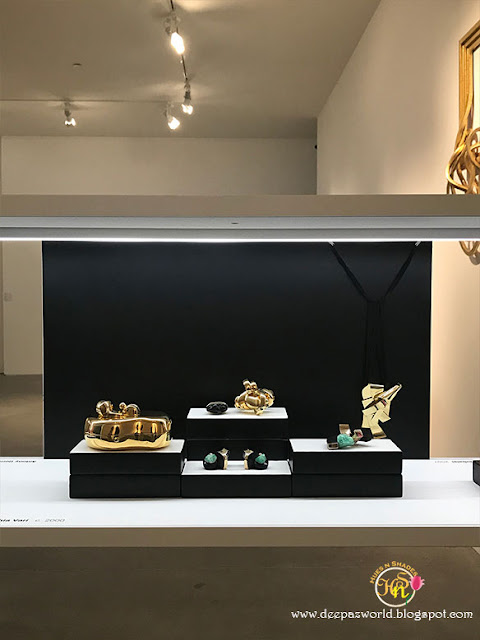 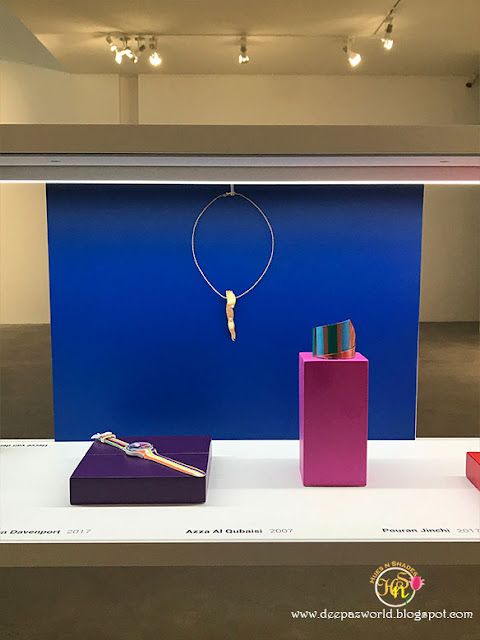 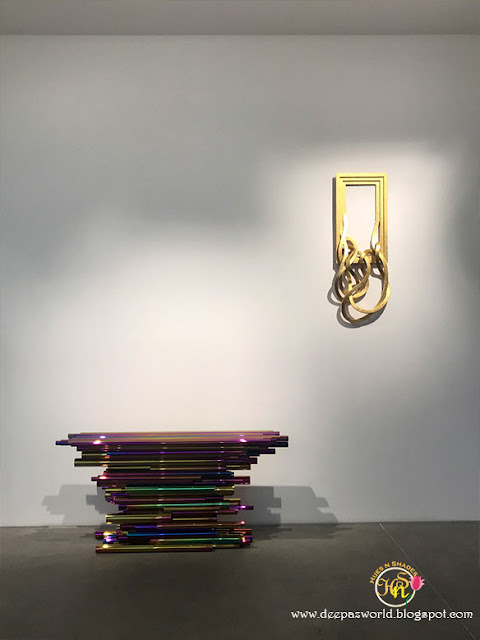 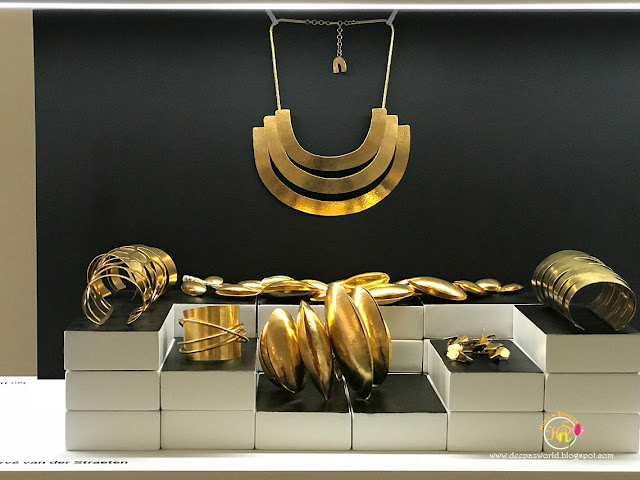 Abstraction is something that every artist and a layman can debate and argue on forever, especially if you are seeing something like egg-shaped forms, as a viewer. But then it isn't as simple as it looks as deep thought does go into it as for a realistic work. It is not something an 'artist' ventures into when he/she doesn't know how to paint as 'some people' put it so effortlessly. Jean Highstein's "Space and Place" reveals some light on it by speaking about his process in his curatorial note. Jean Highstein, a key figure in abstraction, used bronze, steel, concrete and wood to create primal and organic forms. His boneblack pigment and Chinese ink stand in contrast with the white walls of the gallery and its rugged-sturdy look stands in contrast with his delicate drawings. The timeline and photographs along the walls and beside the stairs give us an idea of his line of work.

“Highstein’s quasi-manufactured sculptures create a dialogue between raw materials and nature, while also stressing the importance of the object’s presence and surrounding space. Throughout his artistic career, Highstein investigated the relationship of sculpture to its surroundings and its impact on the viewer’s perception of space.” – Statement by the Foundation.

The exhibition is on until 30 June. 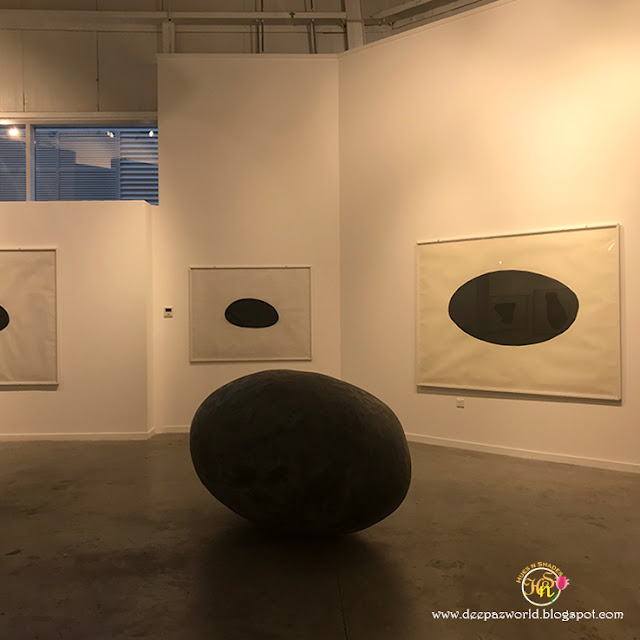 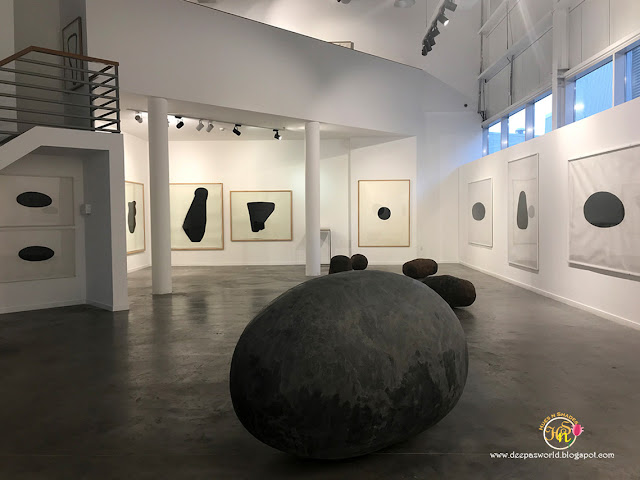 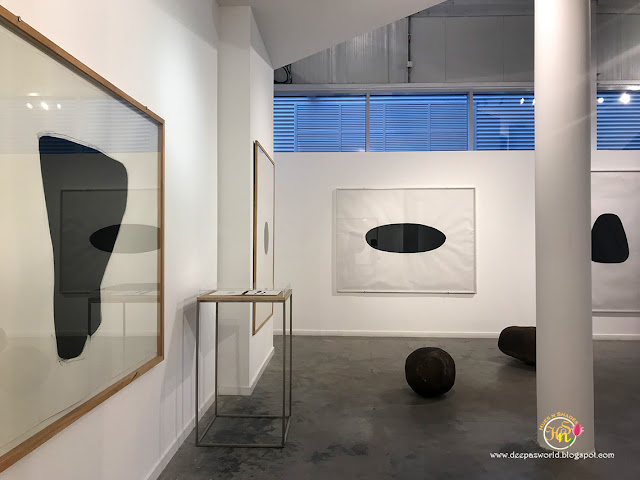 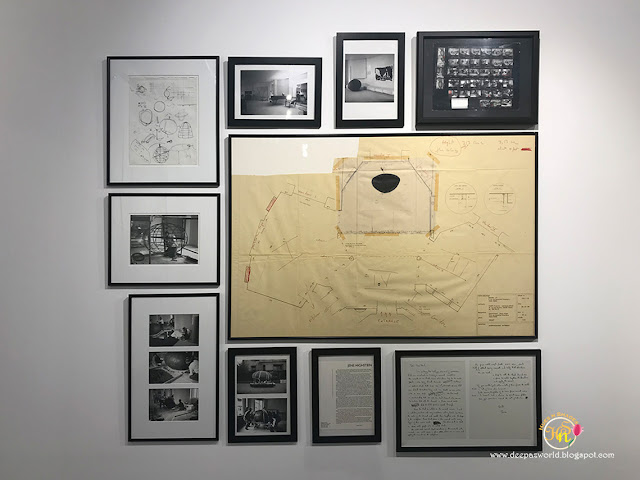 I have divided my trip into 3 posts as it's extremely difficult to accommodate all the photos and texts into one. The final post will be published next week.

Hope you are enjoying this series of Alserkal Avenue.

Oh how lucky you are to have seen all this gorgeous art in person-wow!! Thanks for sharing and happy PPF!

What a diverse exhibit! Thanks so much for sharing photos. Have a lovely week!
~~ Irene

Interesting displays thanks for sharing and educating!

Wow what a great exhibit. Thank you for sharing.

Thanks Deepa, what a treat.The mesmerizing colors of the first three paintings bowled me over.

Wow! So many fabulous art pieces on display, each one a creative masterpiece. Wonderful compilation, Deepa!