The past couple of weeks has been really busy with a lot of stuff to do and not having enough time! I finished a commission work for a dear friend in Abu Dhabi. He had selected a work which was originally commissioned by another friend 7 years back when we were in Dubai. It was a gift for her daughter's teacher. So here I was working on it and it felt fabulous! I could see the changes in my work though I was working on the same painting. It's folk-inspired style as my friend had wanted it that way when I first painted it in 2011. In both pictures, however, the colours aren't true to what meets the eye. I don't know why that is so! 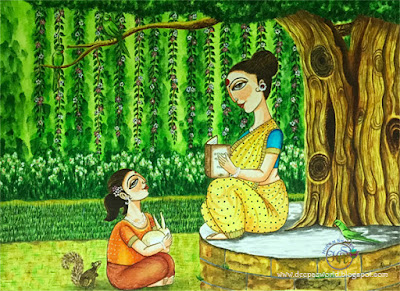 I have used acrylics with gouache and embellished it with semi-precious stones for the ear studs and the nose-pin. It's A3 size. 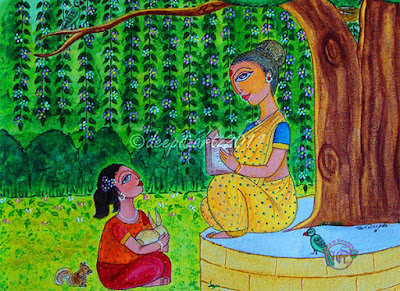 I am also preparing for Inktober, trying to select a theme of my own since I feel so restricted with the official prompts. I want to work on my shortcomings and what better way than to chose one's own theme to improve a particular skill or aspect of ones drawing/painting. Last year was the first time I participated and I had a whole lot of fun!!! I drew insects - "Tiny, But Me!" - 31 of them and yes!! I did complete the change! It was a great feeling! In case you want to check it out the rest, here it is - Week2, Week3, Week4 and Week5. I wrapped it up with an Inktober Insect series calendar. I was asked by many friends on why I didn't make a zine at the end of it...so this time I am thinking of making a zine as well. In case anyone is interested, do let me know.

"So anyone here joining Inktober?"

It would be great fun!

Thanks to Jake Parker for Inktober and here's what it's about and the official prompt list: 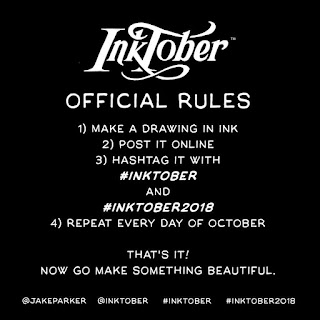 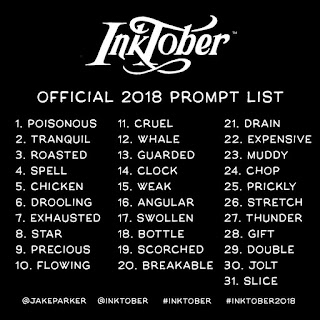 Currently, I am also doing small studies for potential paintings, projects that need some positive "Go ahead" green flags! Here's a sneak-peek...fingers crossed! 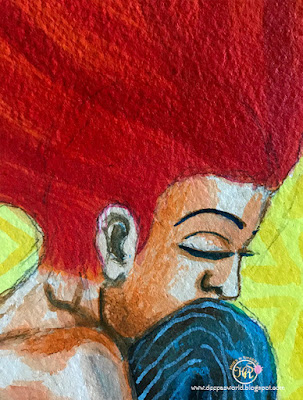 Detail of a work in progress - study for a potential painting

The art is lovely! I remember seeing some of your Inktober pieces last year, they were wonderful!

I really like your folk-inspired painting. Although I also like the one from 2011, I think the latest one really reflects your progress, especially in the tree, the faces, the flowers, ... It's beautiful. I also love your sneak-peek. Very promising ♥

Bright, wonderful paintings. You are a very good artist. :)

Lovely work. I'm doing Inktober too and sticking to the prompts which I find challenging and not what I would pick. Your insects from last year were great.