What if we could give a part of oneself, in some miniature form, to the one we love and adore without revealing our identify to the rest of the world? What if that miniature form is something you can wear everyday like a ring, pendant, brooch or a charm? Something that remains close to you, that you wear, hold it to your bosom and kiss at will. That is what the lovers in the late 18 century to early 19 century did. Since Valentine’s Day is perfect for such a theme, I am sharing with you a tiny tale of romance, intrigue, saccharine days and the lovelorn aftermath. However, the story mainly is about the ornament that held the affection decades in the Georgian era though. 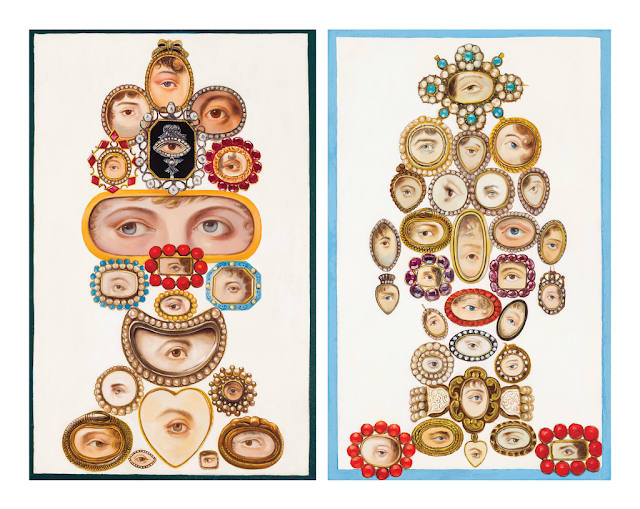 It is said to have started when Prince of Wales, love struck, relentlessly wooed Mrs. Maria Fitzherbert to marry him which was preposterous at the time considering that she was twice- widowed and a Catholic while Prince of Wales who later went on the become King George IV was a Royal Anglican. To escape from his wooing, Maria even moved to France but the Prince, like any hot-blooded-star-struck-lover, wouldn’t give up, sending gifts and even making a suicide attempt. He then commissioned Richard Cosway, a miniaturist, to paint his eye and sent it to her as a token of love along with a marriage proposal. The gift to her astonishment was an intent “eye” painted for Maria’s eye alone making it the subject of her gaze while she herself became the subject of the Prince’s gaze. It is an intimate gesture – the gaze. Mrs. Maria Fitzherbert invariably couldn’t resist and succumbed to the wooing. Later he presented her with another eye miniature and it was said that she returned in kind. They married against all odds only to later move apart due to the clutching circumstances of the time shortly after their union. Their marriage was declared illegal and the Prince remarried his cousin, Catherine or a German Princess of which I am not sure. Much ado about nothing was what was left, I guess! 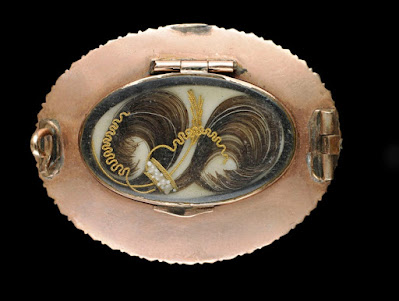 When this story wafted into the country, the rich modelled their love following the Prince’s suit. There was a surge of such tokens being exchanged as rings, brooches, pendants, toothpick cases, charms etc. It apparently became fashionable. The painting or the eye miniature itself was no larger than the nail of the pinky finger (some from a few millimeters to around two centimeters) and it was encrusted in rubies, pearls, garnets, turquoise, diamond depending on the wealth of the lover and of course the sentiment. It sometimes even contained a lock of hair. These romantic keepsakes were in vogue from 1780s to 1820s when they would bestow it upon their paramours keeping their identity a secret from the inquisitive eyes. However, ironically, declaring that they were having an affair leaving the rest of the world to question and wonder. 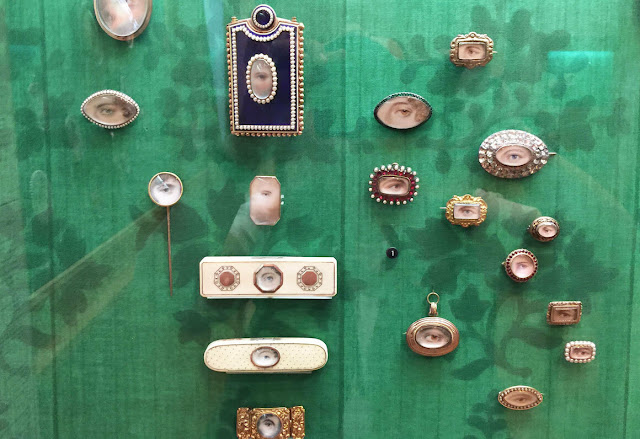 Eye Miniatures or the “Lover’s Eyes”

The term “Lover’s Eyes” was coined by a New York based antique collector, Edith Weber.  It is estimated that only around a 1000 exists today. They were painted in watercolour or gouache on ivory.

“Treasuring the Gaze: Intimate Vision in Late Eighteenth-Century Eye Miniatures” by Hanneke Grootenboer provides new insights into the art of miniature painting and the genre of portraiture. 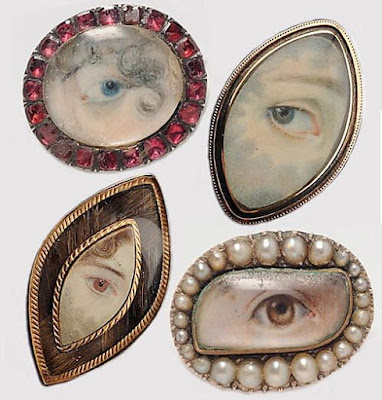 During the reign of Queen Victoria the painted eye miniature gradually took a different connotation becoming the memorabilia of the dear departed. The pearls surrounding it indicated the tears. The coral warded off the evil, garnets symbolized friendship, diamond signified the wealth, obviously. Sir Charles Ross, the Royal Miniaturist, was commissioned to make such objects of affection during her era of reign. 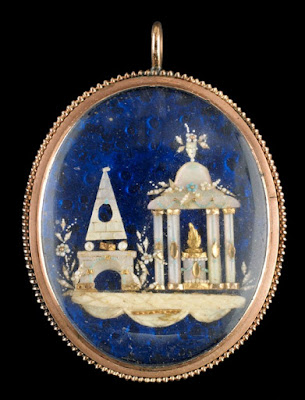 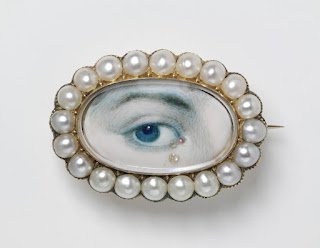 Dr. David Skier is an eye surgeon from Birmingham who was so fascinated by these miniatures that along with his wife, Nan Skier, started collecting “Lover’s Eyes”. They held an exhibition of their unique collection of around 100 pieces, one of the largest collections, at the Birmingham Museum of Art in Alabama in 2012. 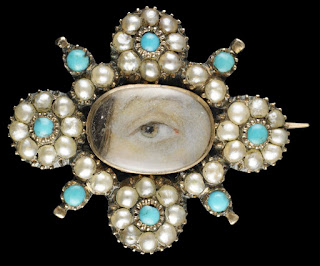 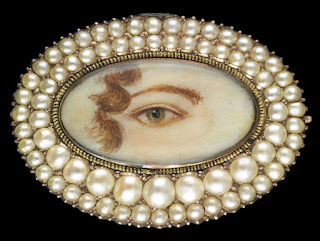 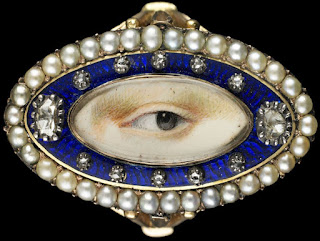 Here’ my version of eye miniatures of my daughter and my beloved. 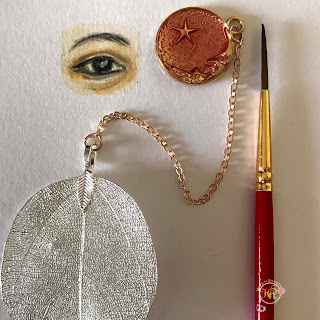 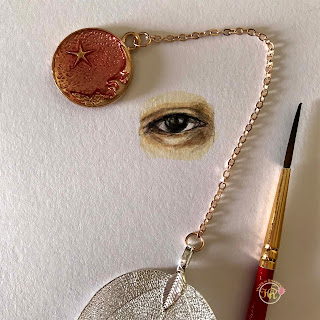 What do you think of the “Lover’s Eyes”? Would you be interested in such a keepsake, a token of love?

If your interest is piqued and if you would like to own/gift such a painted memorabilia do send me an email (mail.huesnshades@gmail.com) with a picture of your beloved’s (left/right) eye and I shall message you the terms.

Hope you enjoyed this post. Do let me know your thoughts about this post in the comments.

Fascinating history and tradition. Beauty indeed lies in the eye of the beholder!

Well this is fascinating. Strange are the ways of love and strange are its expressions. You've painted lovely ones there Deepa.
-Sonia

All eyes look same but expressions limitless. Have a good day.