A couple of works on my moleskine. The first one is in gouache and it's a portrait attempt of Anjli Mohindra, the British-Indian actress who appeared as one of the models in Sky Portrait Artists of the Year 2020 (in case you would like to watch it - BELIEVE me, it's PRETTY INTERESTING!! Click HERE). They also have The Great Pottery Throw Down and one on Baking and Gardening and even Photography but I have watched only the Portrait series as of now. The next two pages are watercolours, the reference pictures are from Instagram (the middle one is from Angie Lopez's photos) and the last is from Pinterest if I remember it right. 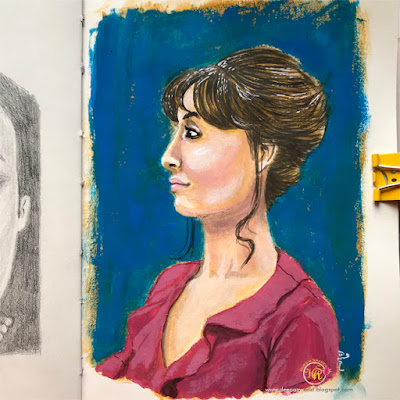 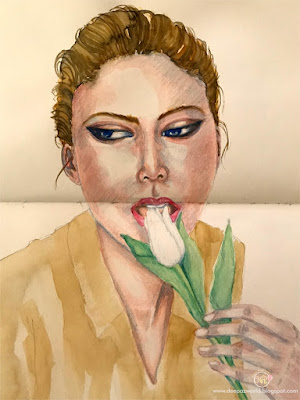 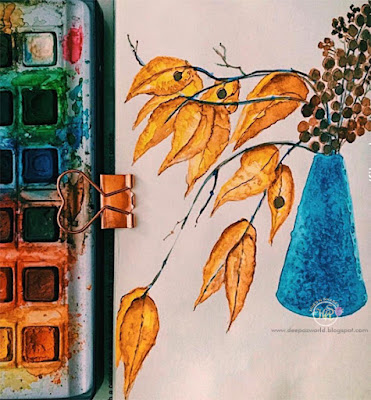 Linking it to PPF!

Posted by Deepa Gopal at 9:39 PM No comments:

Top 5 Women Artists Who Inspire Me

To attempt to write on any of them is like trying to pin them down which is totally insane and impossible because they were wonders whose life reveals a bit of a new beam of light every time we take a glimpse. It’s my humble attempt at paying my respects to these women who are a handful among the finest gems of this world. These are the names that popped immediately to mind and if I linger the list can go on and on because my list is quite inexhaustible with frequent new additions. HUMUNGOUS, I must say.

Amrita Sher-Gil - With a Hungarian mother and an Indian father, with a Hungarian past and an Indian “inner call”, she struggled for a sense of belonging. She perfectly understood “the inner voice” and probably that is what led her to the portrayal of Indian women who seem to be longing for the same even amid all the daily chores and the crowd, a sense of hopelessness in the waiting for things that are never meant to come in contrast to the colourful and earthy tones. Not bound by social conventions, Amrita died young (she was just 28) and bold. As she herself mentioned India belonged to her and she to India. A pioneer in the Modern Indian art, she helped in escalating the Indian art scenario more than she probably had realized. 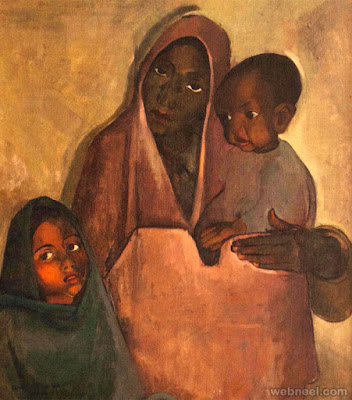 
T K Padmini – Padmini, again, passed away young. She was just 29. The caliber of these young lives is beyond our grapple and imagination. She has left an indelible mark on me. The eerie sense of solitude even amid the crowd, being in one’s own world, the simmering angst I find on her canvas is something I relate to. The women, the folklore, the myths, the seemingly simple archetypal of a village are all portrayed with earnest sincerity. There’s a sense of foreboding at play in her works as well. To me, she’s on par with Amrita Sher-Gil. 86 paintings of Padmini are in the permanent collection of Durbar Hall Art Gallery, Ernakulam. 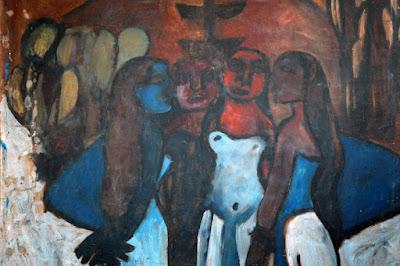 Frida Kahlo – Most people, particularly women artists, identify with her at many levels. "The Blue House" is a shrine now that is visited by millions of women. Her art directed towards her self, a reflection of what went inside her is extremely strong and potent. Her ideas of self, the excruciating pain of her wounds both physical and emotional from which she drew her inspiration had sent her through a roller-coaster ride all along her life. She pined in ways that is difficult to explain and perhaps that is the element that most women connect with. She was wild and fierce in her imagination. She is an icon. 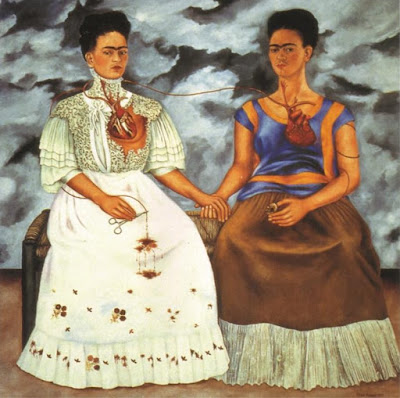 Paula Rego – A living legend, a pioneer in expressing the ghastly and beastly side of the feminine; a brutal satire. Her characters are raw, uncouth, on the verge of grotesque and yet sublime. Her skill is "unflinchable" and her theatrical backdrop and characters mysterious, intense, obstinate and in layers. The sheen in her fabrics is layered just like her characters sometimes making me wonder how she manages the metaphor. A sense of threatened violence, sexual tension, malaise, repression abound in her dystopian interior world. Her Abortion series backed up the momentum to legalize abortion in Portugal. Casa das Histórias Paula Rego is a museum in Cascais, Lisbon designed by the architect Eduardo Souto de Moura to house some of the works of the artist.

Kathe Kollwitz – the German (sometimes mentioned as the Expressionist) artist was a fierce flag-bearer of the desolate and the downtrodden, a staunch opposer of the war she committed herself to the cause and depicted harrowing experiences of the same; she had lost her younger son to World War 1. There was no melodrama but the emotional turmoil and anguish. The plight of the impoverished and the suffering of the aftermath by portraying more of women – self-portraits, the mother and her children, women working, mourning and leading the revolution was etched on the minds of the masses. It still is as one can see her works in graphic prints on the subject even now. 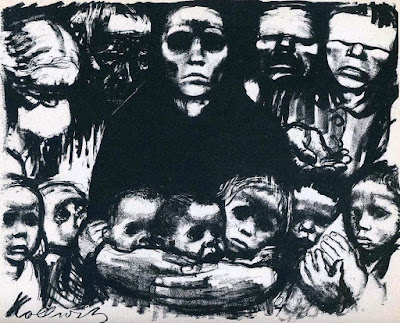 Honestly, there are so many more artists, from the contemporary scenario as well. I may come up with them sometime in the future.

On a personal note, I am not an avid celebrator of "days" only because I strongly believe that nothing should be restricted to one particular day and should be something that has to be followed every day of our lives! I couldn't find a better day though to pay my tribute to these Incredible women who have been inspiring me all along.

Who are your all-time favourites?